Hey Everyone, it’s hard to write a hearthling AI that knows how to get to every single possible permutation of building–which is where you come in! If you have a building that they just cannot build, please start a brand new game, draw out the exact same building that they get stuck on, and send us the save file. We’ll take a look and see what we’re missing.

Hopefully by the time the game is done, they’ll be able to get to lots more building structures than they can right now.

Since sdee did post this in different threads and myself posting a savegame in one of those threads, I thought about opening a thread to stuff (maybe) all those savegames in one single thread. (did i write thread?)

Here is my first house and savegame 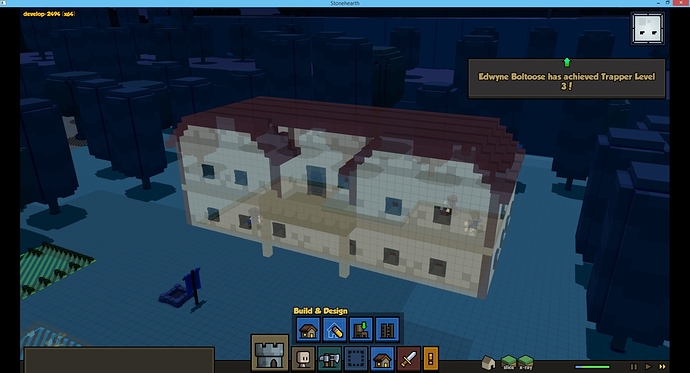 Thanks so much for all your building reports. We’re doing another pass on building right now, so this will be super helpful. Also helpful: could you upload problematic buildings as templates for us? That way, we can try to figure out what’s wrong in fresh environments.

Navigate to the building templates stored in \saved_objects\stonehearth\building_templates

Locate the .json file for your template. For example, if you wanted to upload the “Clay Dining Room” template, find clay dining room.json.
Compress the .json file to a .zip file.
Right click the file you wish to zip.
Left click Send to.
Left click Compressed (zipped) folder

Hit enter on your keyboard.

Upload the file to this thread in the Discourse by clicking the upload button in the editor and navigating to the file, or drag the file into the editor with your mouse.

If you encounter any difficulties with uploading (or are a new user), please post in this thread and mention the moderators (@moderators) and we will do our best to assist you.

Thanks to everyone who has posted his buildings that will not be build.

If you have skip the main site:

Stephanie is currently enjoying the last of her well-earned vacation, so I (Chris) am here to fill in for
Desktop Tuesday this week with some updates on what I’ve been doing.

One of the things I’ve been looking at recently is fixing our building system. Right now, it’s really easy
to design a building that will cause your hearthlings to throw up their little hands and shout “nope” at the top of their lungs (which, come to think of it, would be a pretty cool little effect to see in the game).
There’s even a mega-thread we set up in the discourse where you can upload links to your unbuildable building templates.

The good news is that many of these buildings now build (on my computer, anyway :))
There’s still lots of work left to do until we have something that’s both user-friendly and powerful, but Alpha 15 should be much much better for all the aspiring architects out there playing Stonehearth.

Everyone helps to make this game better, soooo keep on posting buildings, even after Alpha 15 is released

3 Likes
Cannot complete building
Poor building AI
I found a ton of stonehearth building bugs. How do i fix this?
Building quirk in caves
Custom Buildings Not Building
Premade Building VS My Custom Made Building
[A16/A17] The buildings my hearthlings will not build (round 2!)
Inn or Individual Housing?
Build as many shapes as possible
Building Failed/Won't Finish
Problems with leftover scaffolding/ladders
Anybody notice...?
Hearthlings won't remove ladders on slab bridge
Castle build crushes engine
|bug| A14 2797 Cannot Build This
Won't build a house with walls inside
A-14 Is almost here! (Have a present!)
Unable to build building
Looting and Tree Placing
Hearthlings stuck in an infinite loop whilst building
Epic, Gigantic, A14/A15 Saves
Alpha 15 | Can't Build This "Lamp Post"
Unbuildable and can't tear down
Workers unable to complete building construction
Building Design Bug
Workers won't build building with second story (with save)
My builds too ambitious/complex?
Structure Build Order Prohibits Completion
MrVertinox August 20, 2015, 2:37am 2

Hi. I’m using this thread instead of starting a new one. I am running into a situation where hearthlings won’t build a building I designed. I have the materials so I do not know what is causing it.

Here is the video of the issue:

And here is the game save:

Thanks for looking into it.

I redid the building and they started to build this time but only the first floor and then a half and then they stop building. I think it has something to do with either the cuts in the floor or the fact I’m building it next to a cliff. Here is a video of me trying to get it to work.

I think it has something to do with either the cuts in the floor or the fact I’m building it next to a cliff.

Cliff walls can cause issues with lack of scaffolding clearance on the ground IIRC. Give it ~5 spaces away from the cliff face or try building it in an open area.

It would be nice to use towers as ways to get up and down cliffs though. I guess I could build further away and use a bridge.

Cliff walls can cause issues with lack of scaffolding clearance on the ground IIRC. Give it ~5 spaces away from the cliff face or try building it in an open area.

Here an other house 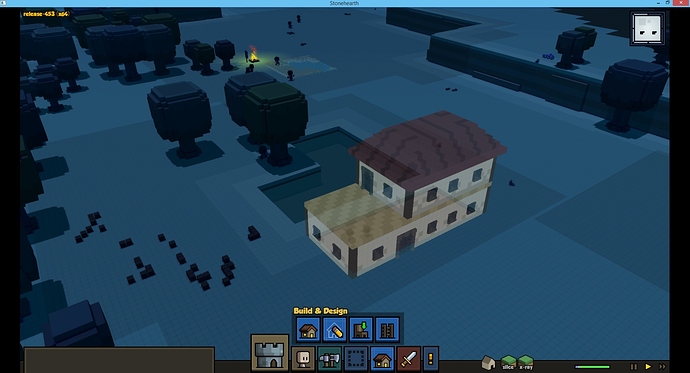 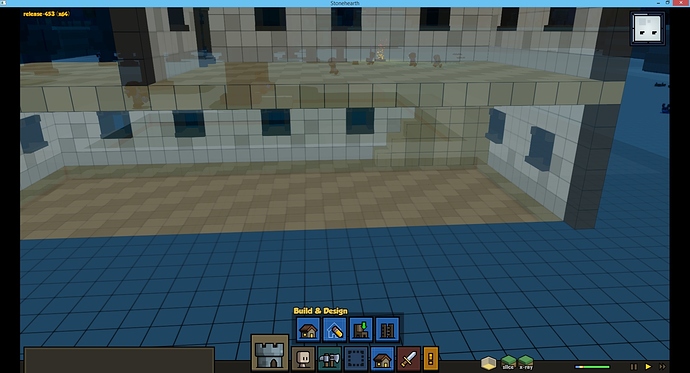 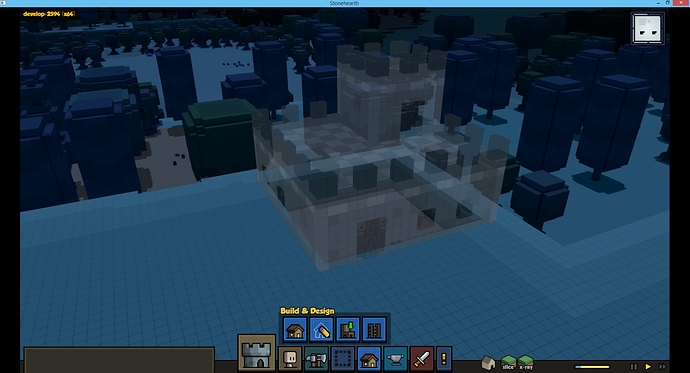 Here is a bigger castle. 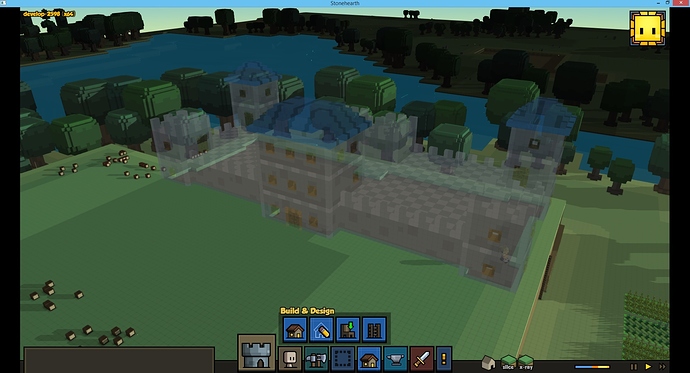 @sdee, @albert …are you still looking for templates that cannot be built?

I think they do. You can not do anything wrong with posting them.

Posted this one about a week ago: Structure Build Order Prohibits Completion

Summary:
I did this with a prefab design, but I’m pretty sure it will happen with any building, under the right conditions. The reader’s digest of the problem is, when the right conditions are met, buildings cannot be completed without modifications to the surrounding terrain in order to enable Hearthlings to access impossible-to-reach places.

Please note: If you do not have the furnishings on hand when construction begins, you may not be able to replicate. Indeed, the same building, placed in the same way, immediately to the right in the screenshots below completed fine, because I had not yet begun maintaining a reserve of beds.

Expected Results:
Hearthlings would observe a build order that does not result in blocking their own progress, and the building would complete without intervention, OR, I would not be allowed to place the building in this way at all.

Actual Results:
Construction is halted and then ignored until the player removes the offending terrain. 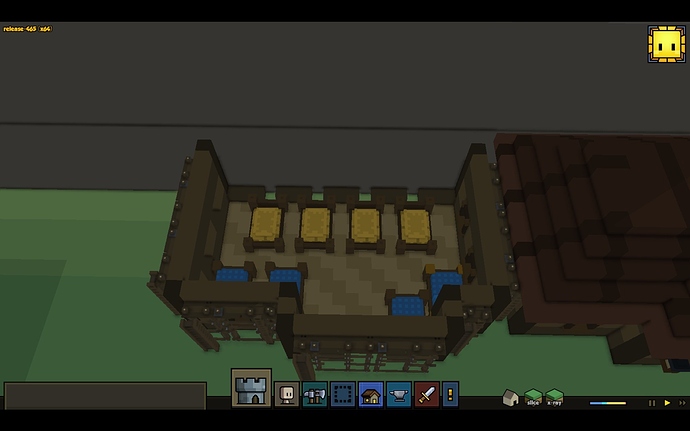 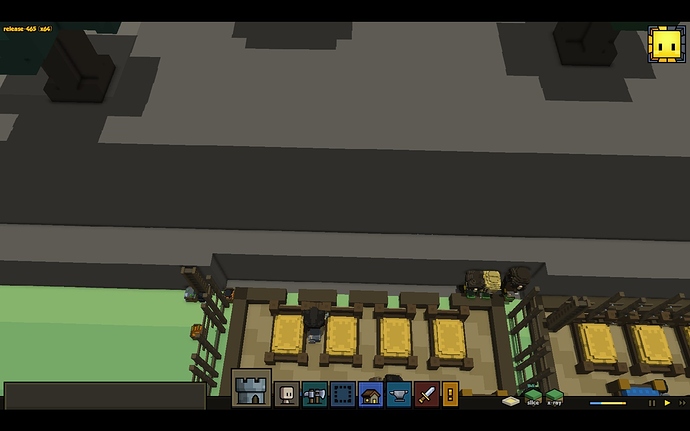 See this issue for savegame and logfile. Timestamps available upon request.

Thanks! Merged it here.

Exactly as the title says: Am I just too ambitious when it comes to building? I’m on the newest build (12) although the top left says 2594, I recently updated to 2598 with no change. Builders won’t build the structure. The building is even 1 whole building as well, where as sometimes I’d end with maybe 26 buildings for just 1 (I have a feeling that’s caused by the building tools auto changing to slabs randomly)

So now, I’m stuck. I want to play this game but feel like my building ideas are just too ambitious and I really don’t want to make a small basic town

Anyone knows the reason the workers refuse to build a building that had been ordered ? I have all the required items and materials needed but all the workers remain idle. It would be nice if the AI can warn the user the reason the building failed or is not being built (insufficient materials …etc…) or probably the building AI is just rough around the edges for now ? The worker build a ladder I designed and stopped working on the other parts of the building.

Only the staircase was built half way (floating mid-air) and AI simply doesn’t build anymore. I would suggest an inclusion of a “delete” button to remove those building components just in case an ugly build like above does happen. 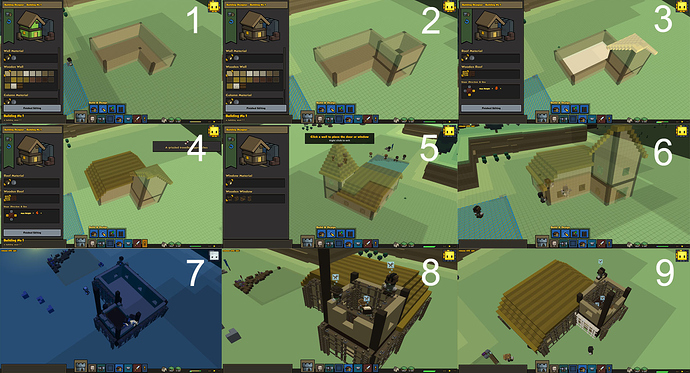 Starting this Building is easy for the heartlings … .but when they want to build the tower on floor 2 as you can see on the picture at step 2, they put the “wood construction” inside (step 7 to 8) and cannot go out from there … they are trapped inside the buidling and die as you can see on step 8 and 9.

If I try to build anything more complicated than 4 walls with a door I get error codes. Its pretty frustrating since building is about the only thing that is interesting right now. I know the content is coming so no worries. But I wish I could just build without issues for now. Even being able to build without MAJOR issues would be nice

Hey there @mcawesome! Welcome to the Discourse, and awesome username!

Can you be a little more descriptive on what you cannot build? Do you literally mean that if you do anything more than a floor, 4 walls, a single door, and a roof you get error codes? That should not be the case. If you were simply trying to make a point that there are building issues, please provide some specifics so the devs can get it working.