Guide: "From a picture to an animation"

“How to start working on my own stuff?” That was one of the first things I have had in my mind after I have joined the community of Stonehearth.

In the meanwhile I have tried this and that and would like to share my “lessons learned” with anyone interested in it. If this guide provides an easier entry or some motivation to start thinking about creating own voxel-desings, modding, animation… nothing more I could ask for

So what should this be all about? I want to create a few videos (I guess it will be 3 or 4), which should show the whole process from a picture to an animiation:

Depending on how creative you are, you can later on exchange step 1 with your own creation and hopefully get some hints on how to move on.

I will upload all required files and make them available for later re-use. Many people do play around with the trial-version of Qubicle. After step 2 I will provide an .obj-file of the model we will work on. So if you want to follow the guide and start playing around with Blender… no problem.

The tools which will be used are free (if you can life with the limitations of a trial-version of Qubicle):

If I have learned something already… it’s not rocket science. So give it a try.

Agenda: For easier access, here you have some links to the single videos in this thread:

If you are new to Qubicle, this post (basics) and that one (advanced), might be interesting, too.

So give it a try.

cant wait to see the videos, as i could use all the help i can get!

The first step on the way to an animated model is for sure… knowing what you want to do. For this guide, we make our life a bit easier. The devs told us what to do

Also, a few of you ambitious modders like to reverse-engineer my
character models from art, so I’ve taken a screenshot that shows the
voxel topology to make your life easier.

So, we will use the dwarf and try to animate him. Here the starting picture:

As replicating him is maybe not that much of fun, I have created a “speed replication”-video as the first part of this guide. Here we go: 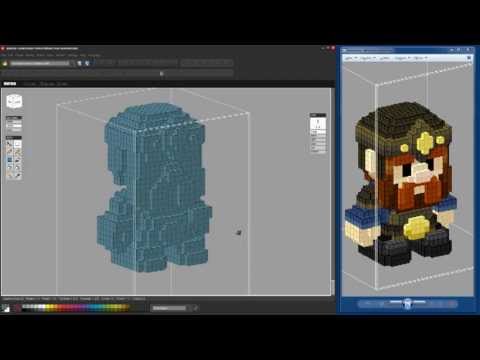 And as promised, you can download the .qmo-file here.

I appreciate what you’re doing here. The first video looks good; its very clear to the viewer (at least to me) what you are doing and how to are going about replicating the model.

I can’t wait to see your help for working with Blender; I’m sure it will be very informative. Maybe we’ll see a lot more animated content on the forum because of it!

In the second part of the showcase you can see how the model (created in the first video) is colored. As this is a bit boring, I have also included some basic information on how to use Qubicle Constructor.

The colored dwarf-model can be donwloaded here, the color map I have used is available here.

P.S. As this is one of my first streams, I am more than happy for every feedback and suggestions to improve for the future, e.g. if it is not too long or if it is hard to understand me

Wow, thanks so much for doing this. I have, in fact, been looking for just this sort of thing to break that “where do I start?” barrier. Really looking forward to the rest of the videos.

Next part should be about separating the body parts and preparing the model in Qubicle to be exported into .obj-format.

you can’t export as a .obj from Qubicle via basic only pro right?

No… but I have the Home-Edition and as stated at the beginning, I will upload all my files for people who want to follow this videos. So as a first step, you can take the .obj-file I will create and play around with it. If you like it… well, you have either to wait for an agreement between Minddesk and Radiant for a “Stonehearth”-Edition… or spend some bucks.

Saving this bro. Sometimes youtube rigger classes go all out and over kill what someone starting out is trying to do. Thanks.

Didn’t see any rigging or animation sections yet?

@FinKone You did not see them, because I did not make them yet

. Next issue is about separating the body parts, which will be the last one using Qubicle. After that, part 4 should be about rigging and part 5 about animation. Maybe there might be a part 6 with an alternative animation method (without rigging). Probably I will upload part 3 in the coming week.

Voxel Pirate, I have to really thank you for putting up that dwarf model. I tried quite a few times and just could not get a good looking base model for either the humans nor the dwarves. Now that I have this, I can actually make the characters and models I want too.

Though, not to try and sound like a lazy slob, I would really, really love it if you would ever model the default human villager and put it up for download.

Like I said, modeling the base sculptures for these guys is proving extremely difficult for me, and this would save me (and I guarantee dozens of other people) hours of time.

Is there a base model for workers? Modeling & Animation

I’d like to have a go at creating my own races/classes/variants of people. Is there a place i can download The base model or do I have to reverse engineer it? If there isn’t can someone make some qubicle files for us less skilled people to work from?

… and if you need one to compare… stonehearth.de -&nbspThis website is for sale! -&nbspstonehearth Resources and Information.

Thats actually even better! (No offense to the creator of the other version)

Mostly because its the default villager, not the carpenter.

@SteveAdamo … I hope we do not have to worry

. The dwarf model is a bit higher in this thread.

1 Like
Does anyone have .obj character file?
next page →