I figured we’d make a new thread for Alpha 5 Screenshots! Post em up, let’s see what awesome things we can do. 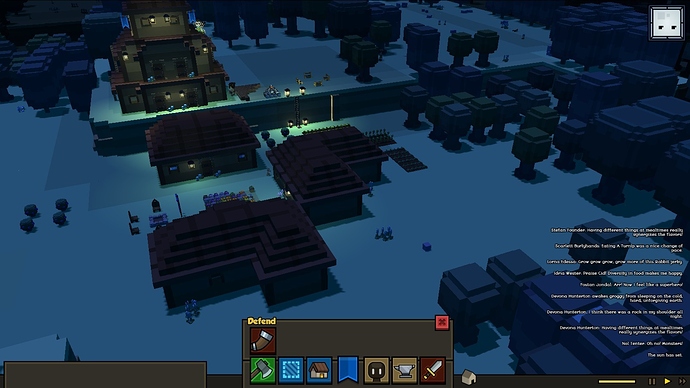 AS LONG AS THEY SERVE THE BUNNY! CARROTS FOR THE CARROT GOD! 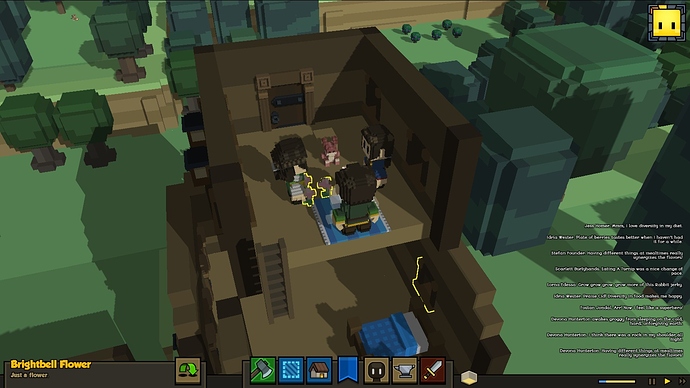 The first house in Whiterock Valley… 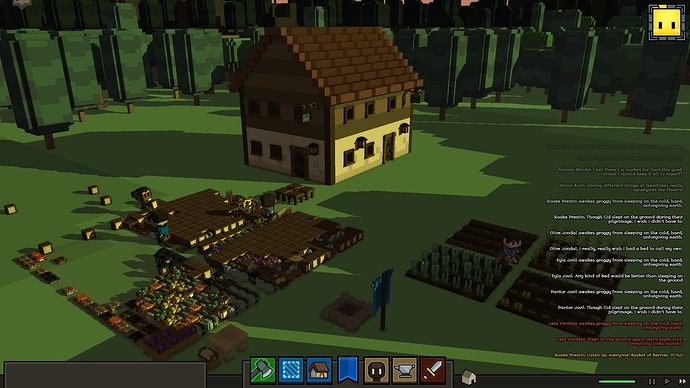 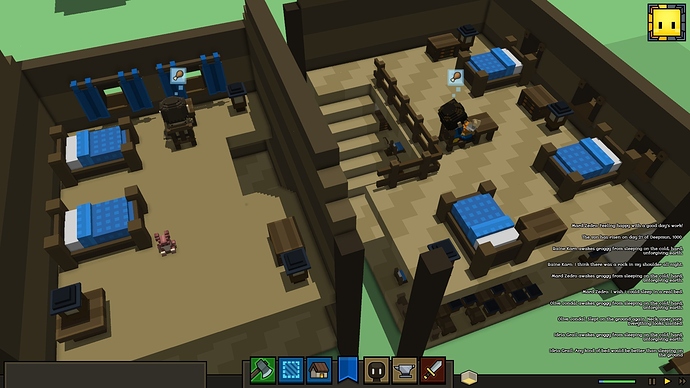 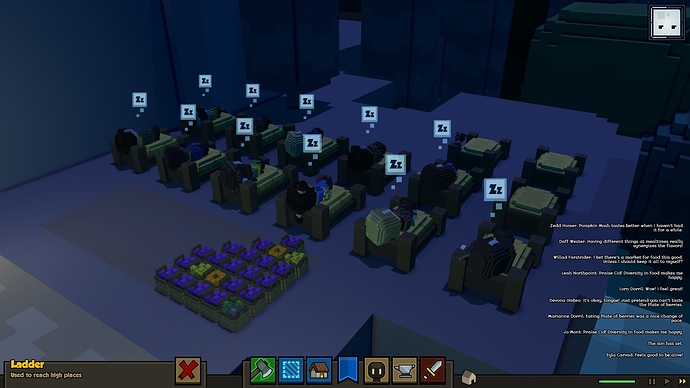 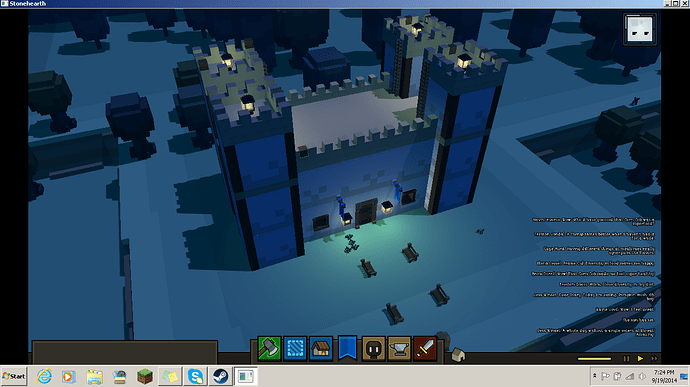 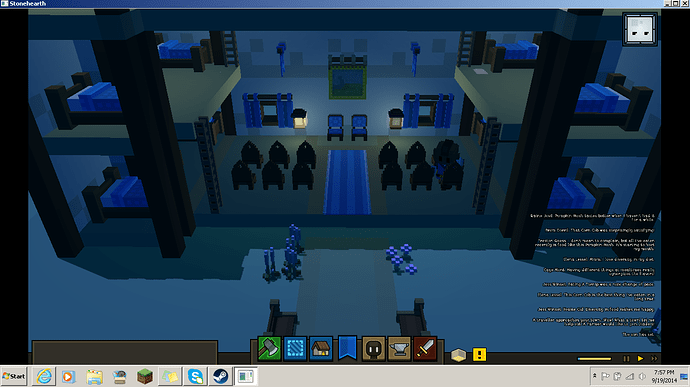 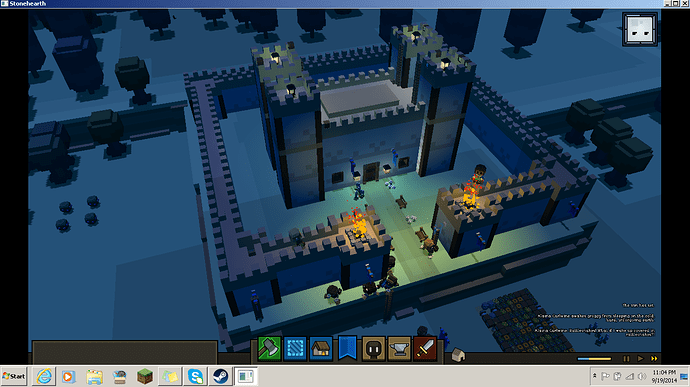 I … that castle! gasps

All replies with screenshots so far have multi-story buildings.

I might’ve started a new trend

The citizens of Tristram handled the evil goblins pretty well, it was not without sacrifice, though.

Nice trick I picked up for defense, If you see the goblins coming, pause the game and drag out a harvestable area of trees, berries… etc…

This should at least drag your workers over to that area, then other classes to collect what they cut down or collect, then you can hit defense mode and have everyone in the same area.

They actually managed to take out about 4 more goblins, but the video cut out earlly.

I just realized that the last pictures I put up weren’t actually on the finished version of the castle. So here’s a few more pictures, with the finished castle AND town! 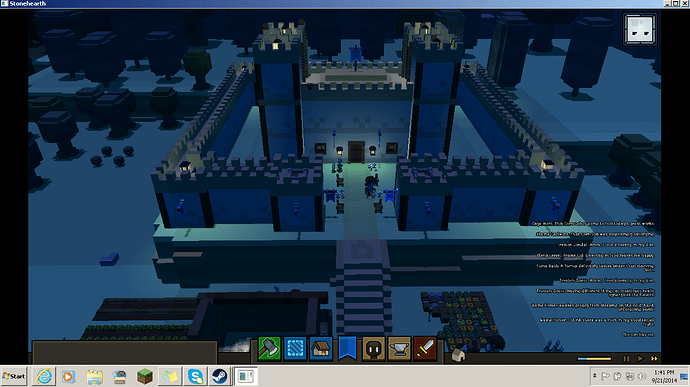 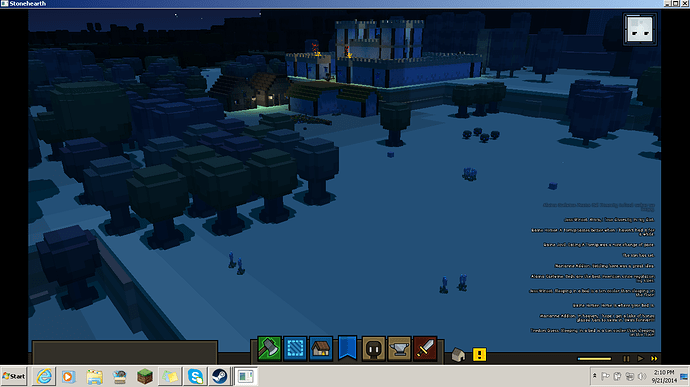 Finished houses at a distance–somehow got both fire pits to light! 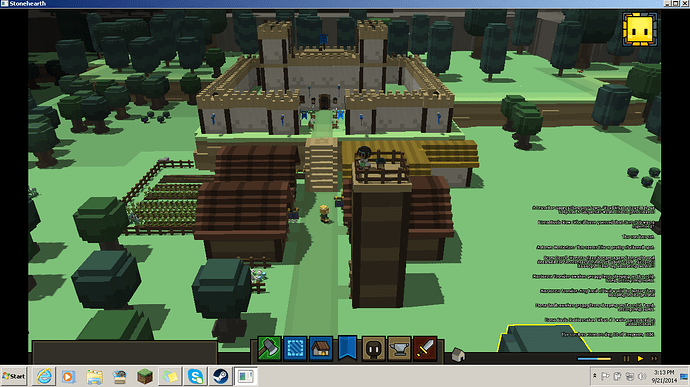 Finished town, plus a wooden watch tower. Here’s a first-person view of the castle from the top of the tower: 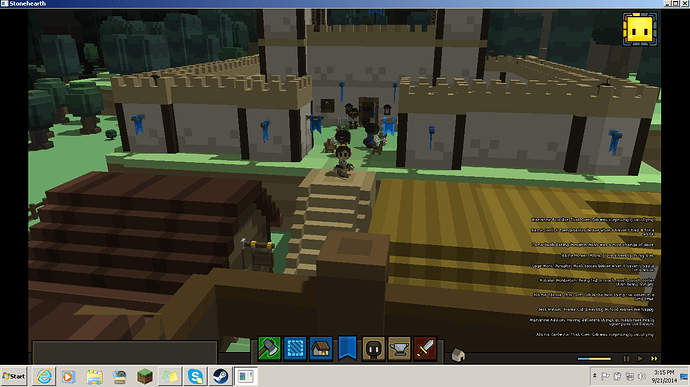 And finally, a night picture of the completed project! 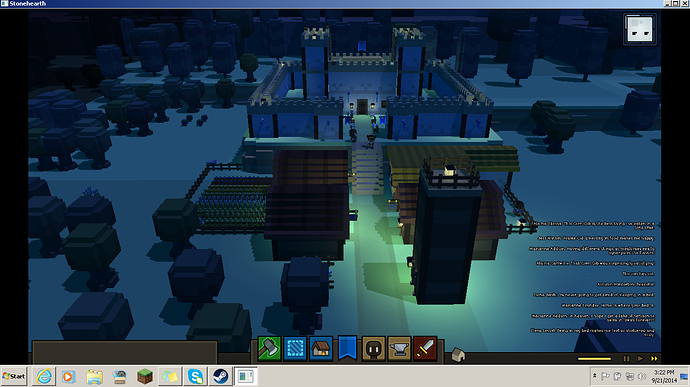 Alas, the project was not without it sacrifices. Of our noble footmen, we tragically lost Leah Fenton, who selflessly gave her life protecting our people from the goblin invaders. Thanks to you, Diadem survived–we will never forget you. 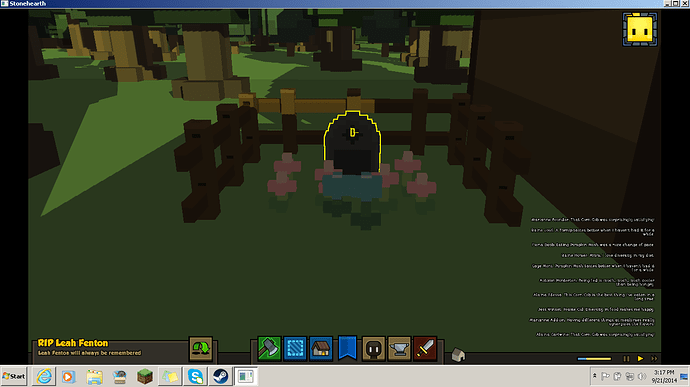 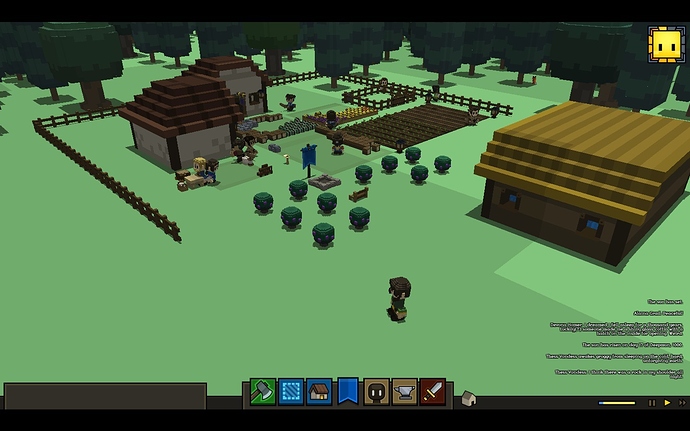 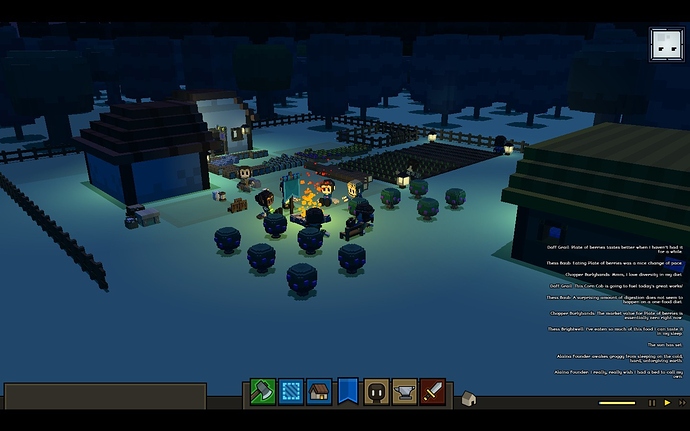 Very peaceful looking, but it might be wise to merge with this thread?

… would if knew how to XD
also “The Cities of Tomorrow” sounds so much cooler than “Post Your Alpha 5 Screenshots!”

Perhaps we could have playable version “theme” pages we challenge the players to build off of, such as the “cities of tomorrow” concept. Perhaps it can be based partially on the specific new elements being added for the new build, or voted on via a poll. 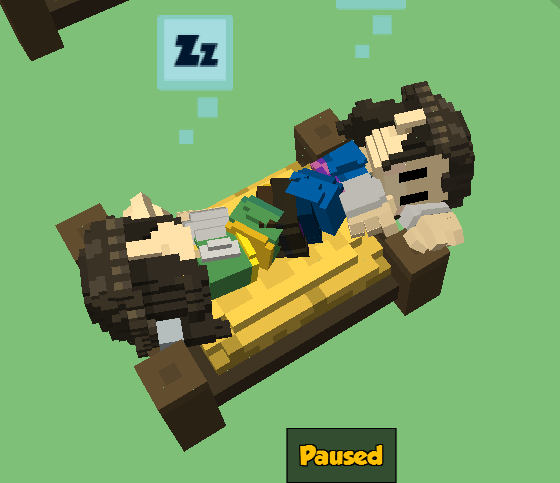 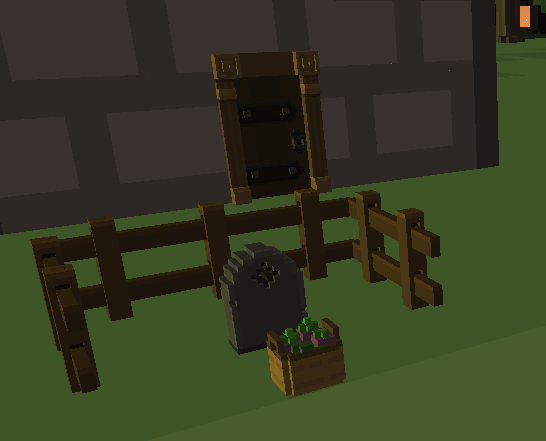 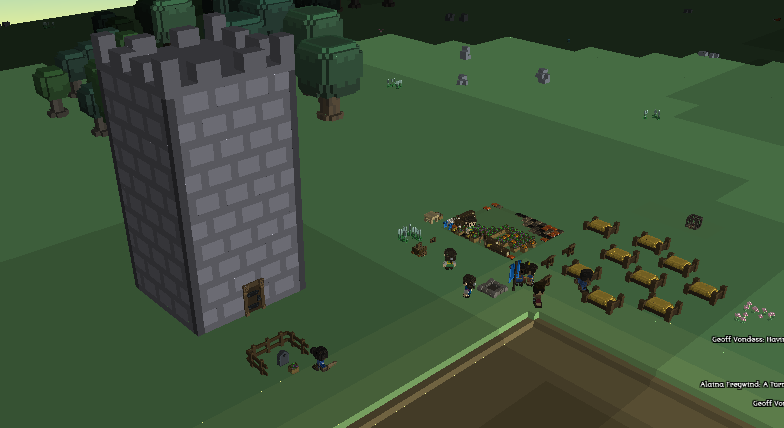 Does anyone else want that wall pattern?

i dont know what sort of “forced labor” camp you’re running @Relyss, but to die while working on the farm?

That’s a food stockpile for offerings. My first farmer died of starvation because there weren’t any berries on the map, and I didn’t make enough farms to feed all of the settlers. After I promoted again to farmer another farmer joined, so it was easier to continue. In the end, there was plenty of food so I didn’t need to keep harvesting.

So I put a little stockpile next to the tombstone because I felt guilty. =/

To tell you the truth, only the carpenter and one worker built the tower (the other worker froze). They are the best. The rest of people gathered materials that were abandoned when it was food/bed time.

Hanging out on the porch. 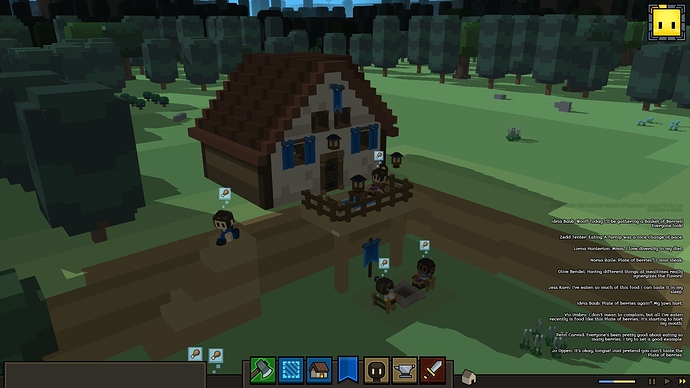 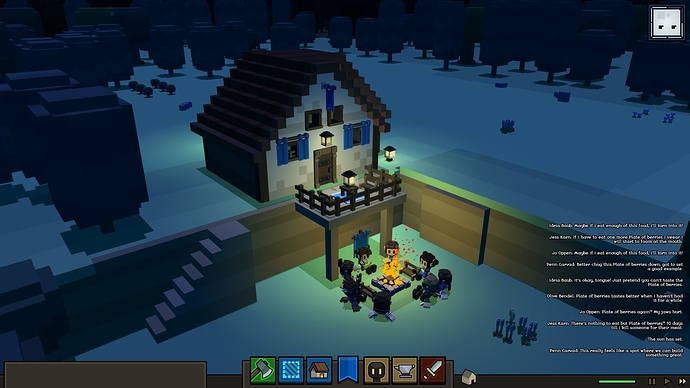 Very nice! I tried to place a garden lantern on a table-for-one in Diadem, but I couldn’t seem to get it to work for some reason. Excellent use of floors for the pillars, I don’t think any of us have explicitly done much of that so far.

Thanks! You have to place a ladder to get the lantern on the table. 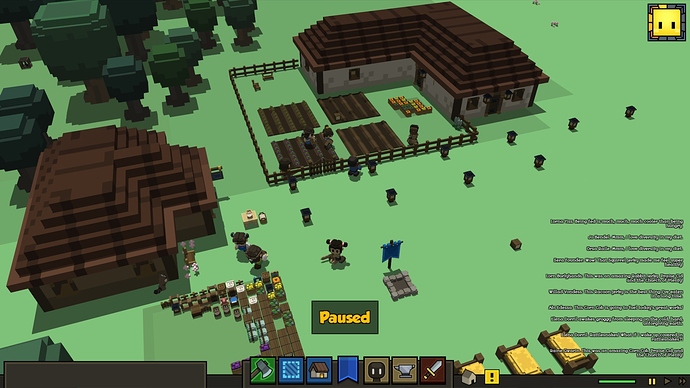 After the farm I’ve decided to build a house for all my other citizens. I wanted it styled after viking long houses: 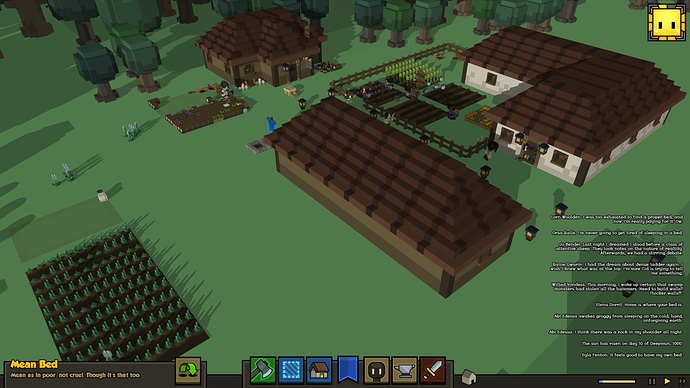 As I have my weaver keeping a steady supply of 4 cloths and 5 threads I needed to have a bigger silkweed supply. A new farm should provide just that.

Coming up next: a round house for weaver to live in.