embedded those for you, until such time as you can upload them directly…

and nice work on the Viking long house… 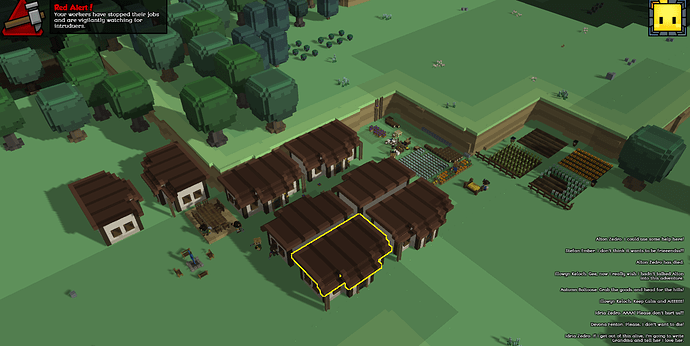 note: after screenshot one of my idiot carpenters decided to follow a goblin into a horde of about 10 goblins resulting in another death. GG AI 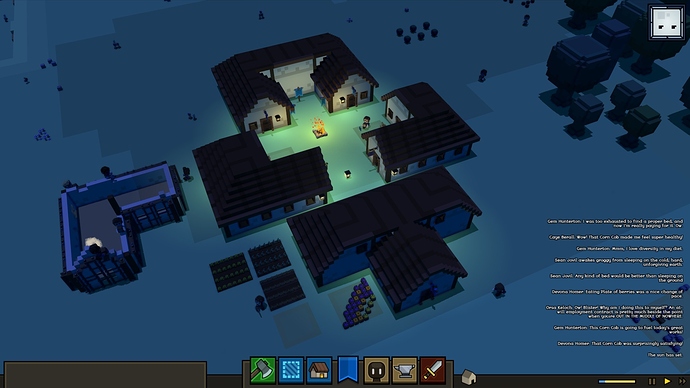 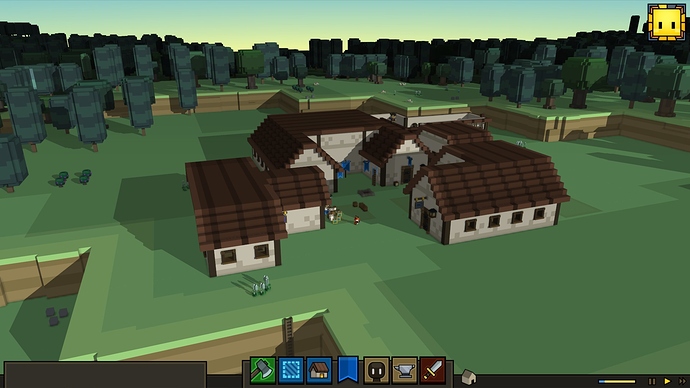 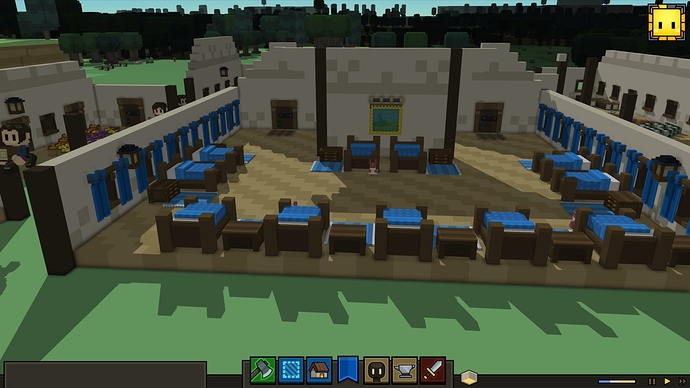 Actually, the amount of curtains stuck out to me first. 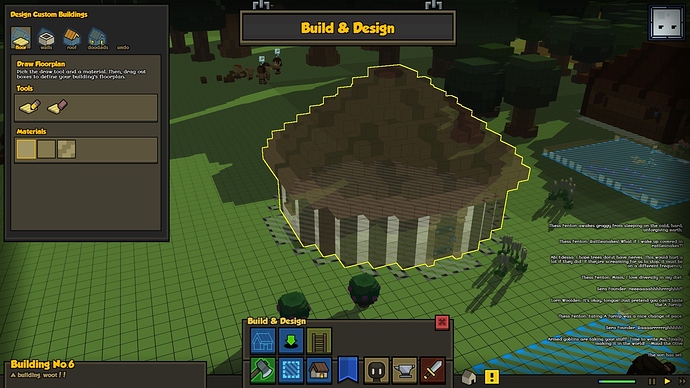 Weavers-design.jpg1920×1080 386 KB
The game bugged for a while when i was designing. I was worried that all my work was lost as I couldn’t start building. Save and load later and the design was still there and the button returned. 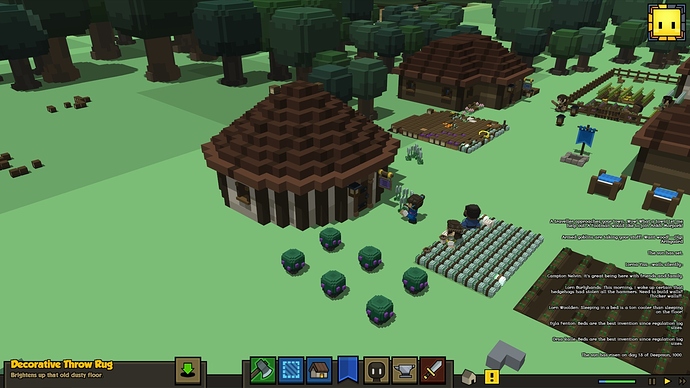 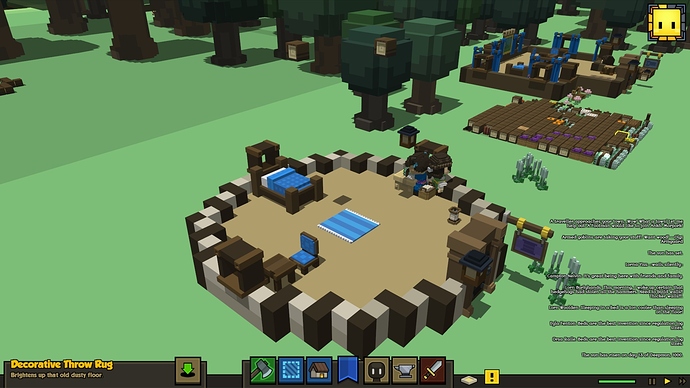 Weavers-Interior.jpg1920×1080 265 KB
Decorated interior with a table for 1. Curtains are still missing as my weaver is always busy with something.
Idea (probably posted already): have a color or cloth picker for curtains, beds and chairs.

Next project: Hunters cabin out in the woods.

oh my god well done with that defying cubism

I wanted to make a round hut

Careful, that sounds a bit blasphemous–dangerous thoughts there…

(Who ever heard of something round in Stonehearth…?)

My little bastion of hope… too bad its gone now I love that style, how you did the roofs. great job!

Can be quite fun to get a place going, was looking for a thread about constructions/villages show-of, but found none, so I’m making this one.

Started a nice village in a rugged area, whit plenty of trees. 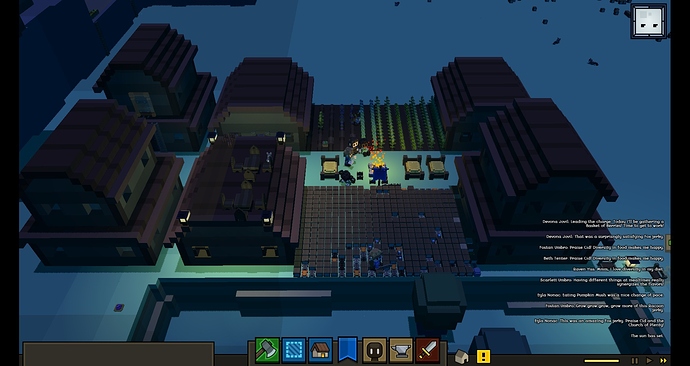 Top Left, two tiers, worker houses, Next is farmers house, and fields whit all the different crops, (and a few extra corn fields). and top Right, empty house waiting for next farmer, hope one wants to move to the village.
Bottom left, two tier, bottom is the lone soldiers house, he have yet to see combat, I do not remember who lives above him… next to that is the Carpenters house whit rooftop eatery whit a view of the below valley, and stockpile for raw resources next to it. and all the way left in a two tier house, at bottom Tailor, whit the Trapper living on the top.

How do you guys think the layout is? decent? houses probably not the most fantastic original ones out there but, I’m kind of proud of em…

Looking good! That’s quite a little village you got going.

Maybe i can get @SteveAdamo to merge here?

I figured we’d make a new thread for Alpha 5 Screenshots! Post em up, let’s see what awesome things we can do. I’ll start. The sleepy town of Tristram… where the Hearthlings are safe from most diabolical things… [image] AS LONG AS THEY SERVE THE BUNNY! CARROTS FOR THE CARROT GOD! [image]

Much more modern Looking then my little village, but I have parks and stuff like that in mine.

I plan to Build a castle in that large open area nearby, then wall it in, so it will look very Feudal Eventually. and, don’t forget my ever vigilant village Guards. Never use defend at night, people will get up from their beds, then when you undo defend, they will just fall to the ground asleep

Everyone has a bed/house in this town, everyone, but I used defend and they fell on the ground. lol. 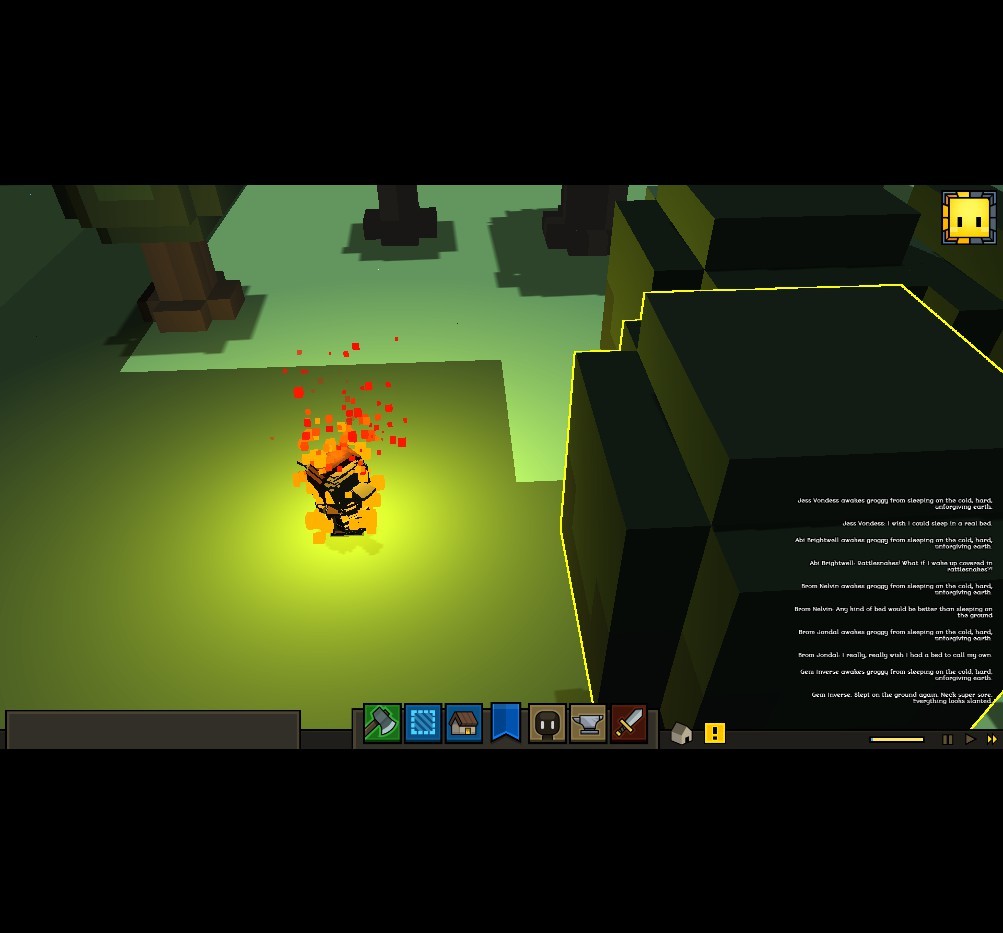 Thank you, hmm, why did I not find this thread before?

@untrustedlife Yes, but your cillage is nice too… My park is just two benches and a lantern next to the corner of the Tailor/Hunter house

Well I finally took a crack at this. I made it until day 19 before the pathfinder / bugs did me in. I really had to baby this and restore from a lot of saves to even make it this far. 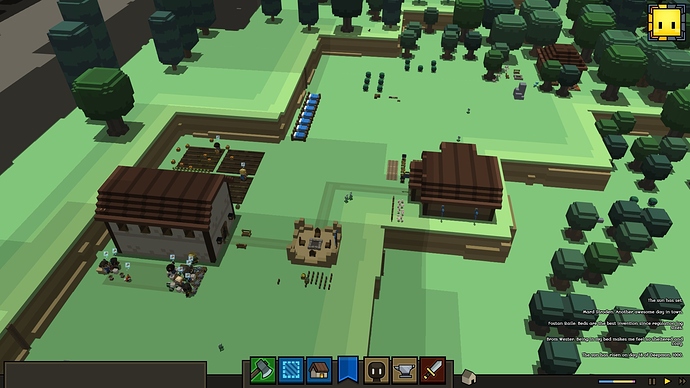 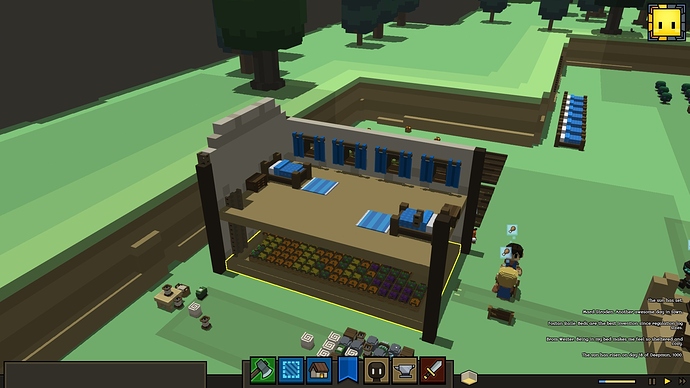 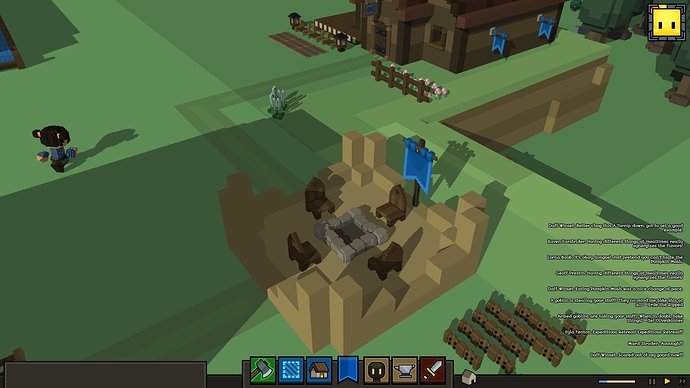 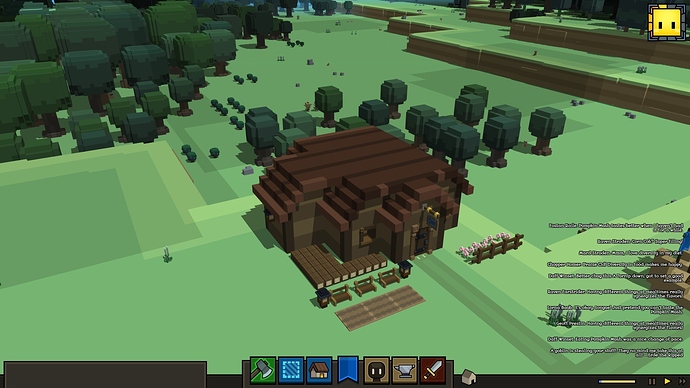 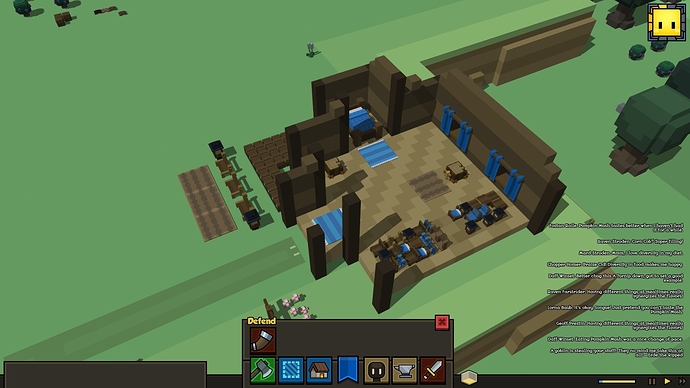 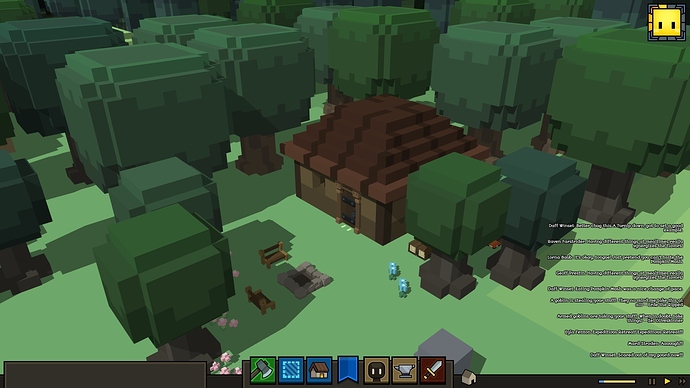 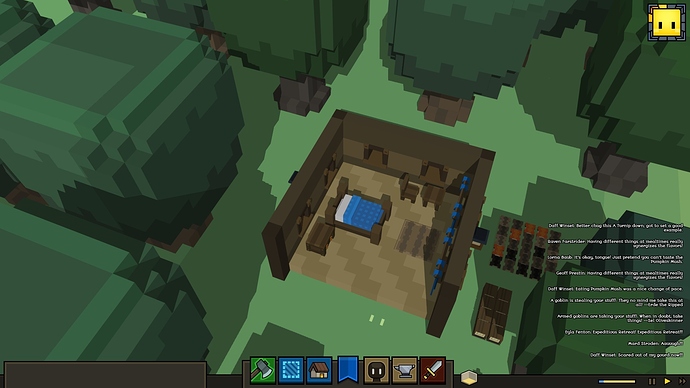 The strange people of Aramon decided to build and live in pyramids: 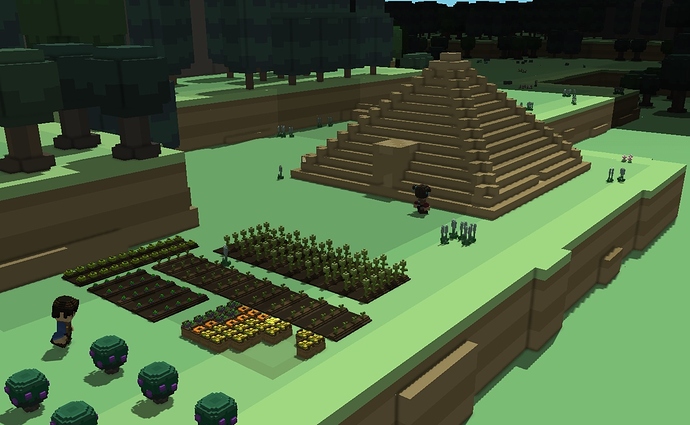 grabs hat and walks out door

How did you do it? Just building up layers of floors? If so that was a lot of work…

Yep, it’s the same way as some of us have been able to also make crenellations for castles and towers at this point. It does take a bit of time to do it, but the bigger concern is whether or not it starts to kick error messages at you when you do it too much–it starts to confuse the system in larger situations. It depends on the type of build, from what I’ve seen.

I’ll be fair, I actually wanted to try the pyramid concept myself, but you beat me to it, @Scal! Well done!

Is your pyramid hollow?

I gave a hollow one a shot and managed it. It’s kind of tricky to get the floors to work out properly but possible. 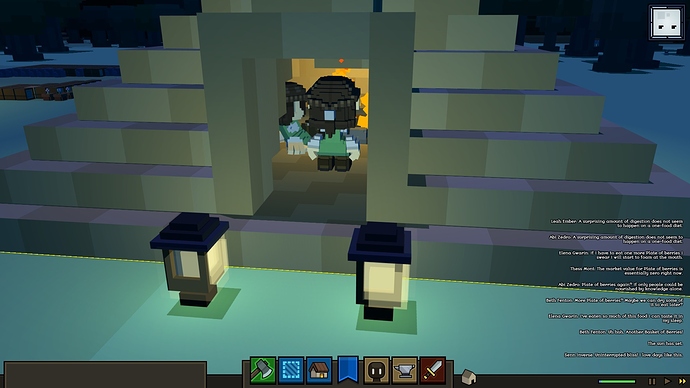 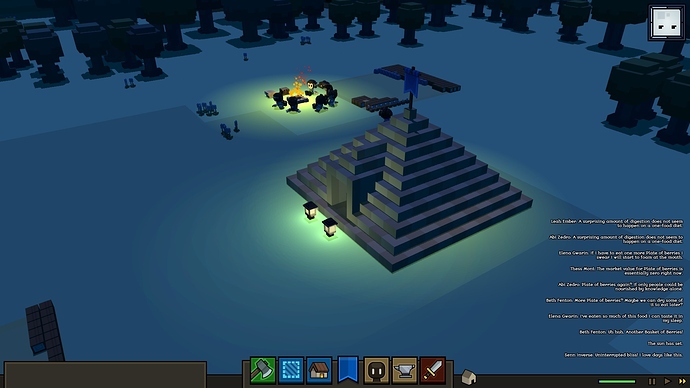