I figure I’d show a few shots of my current progress in Alpha 6. Without further ado, I present the growing city of Grand Sina! 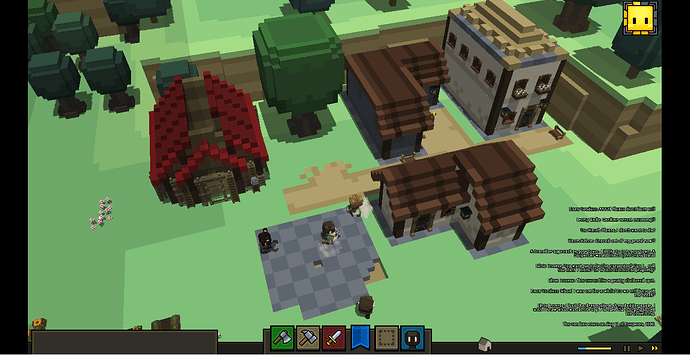 Grand Sina 1.png1364×703 161 KB
Here’s the photo some of you may have seen before. As you can see, I’m trying to create as authentic of a town as I can currently. So, let’s look at the first buildings I made! 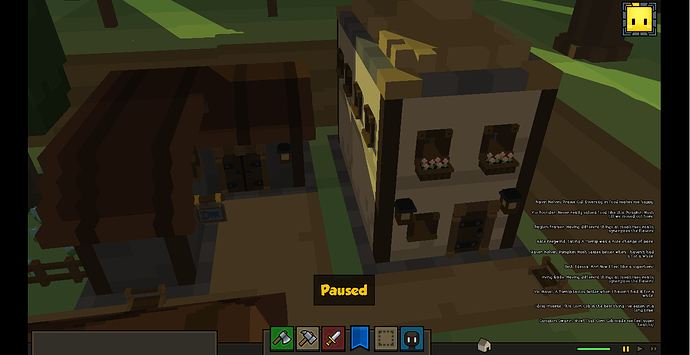 These were the first two structures of the city, a two-story house and a carpenter workshop (out of stone!). The roof of the house was tricky to make, so I ended up creating a roof out of the floor materials and came up with what you see. 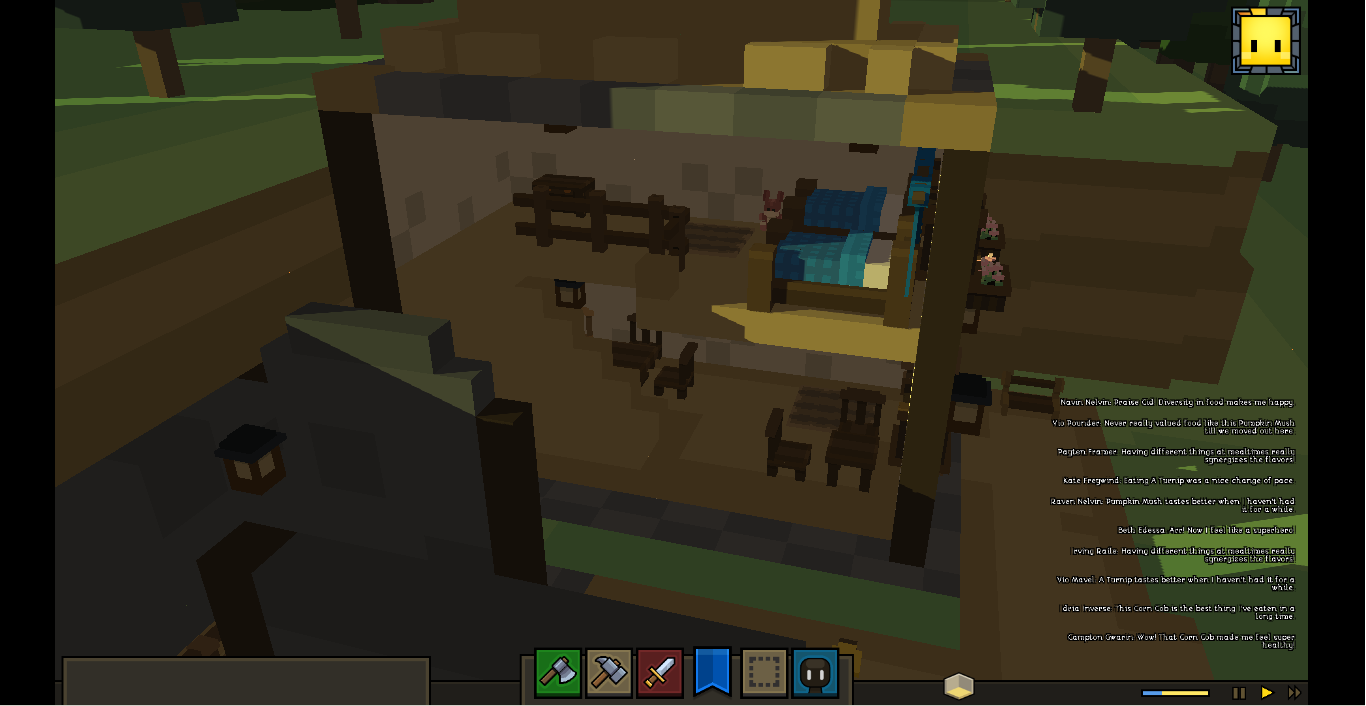 The interior isn’t too fancy, it was mainly just intended as a proof of concept in Alpha 6, considering the construction mechanics changed. I’m happy to say the old tricks are still working quite well, and are available to your desired exploitation. 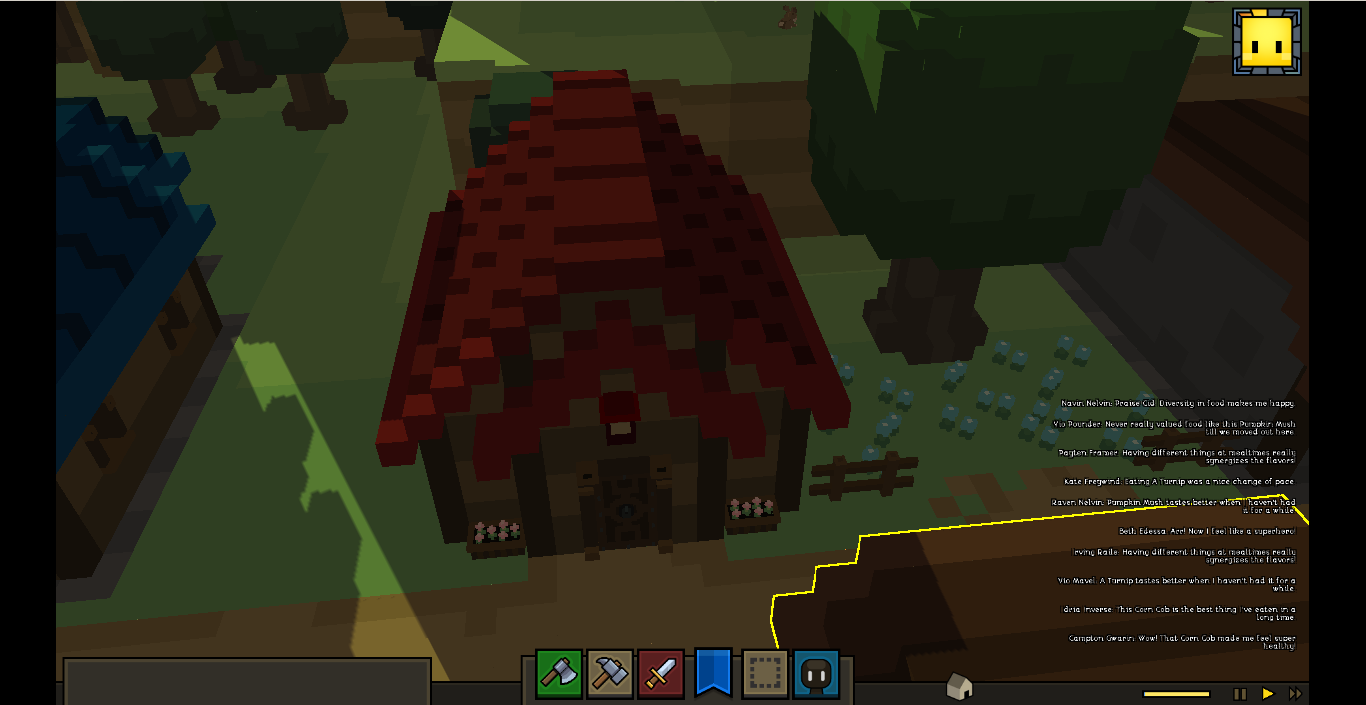 Here was the next little mini-project, the Scarlet Lantern Chapel. 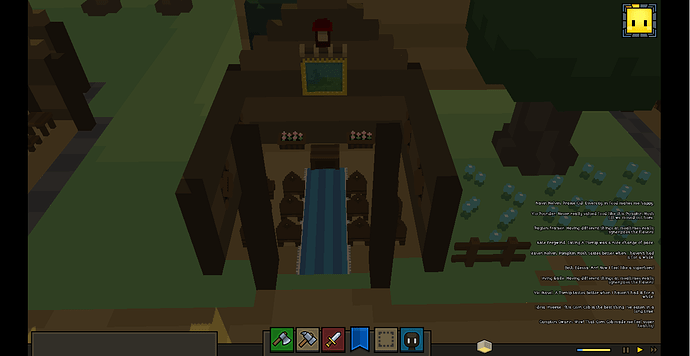 The story behind it was that I was looking for the wall lanterns I had recently ordered from the carpenter shop. And when I saw the deep red lantern in my stockpile, I thought:

W-What the heck is THAT??? I don’t remember THAT bug from the Discourse!!

Apparently, the lantern is actually a ‘high-quality’ item from the carpenter, obtainable once they reach a high enough level. So I thought, “What else should I do, except build an entire structure for it?” 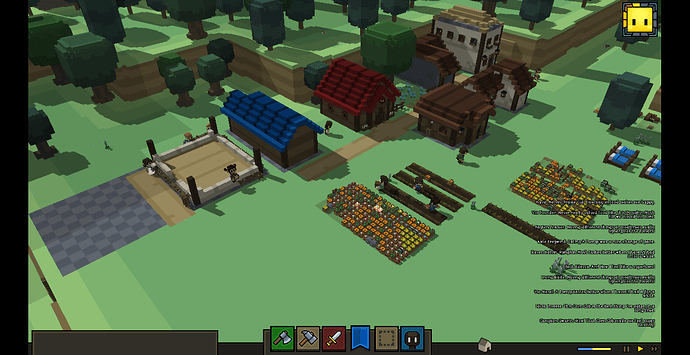 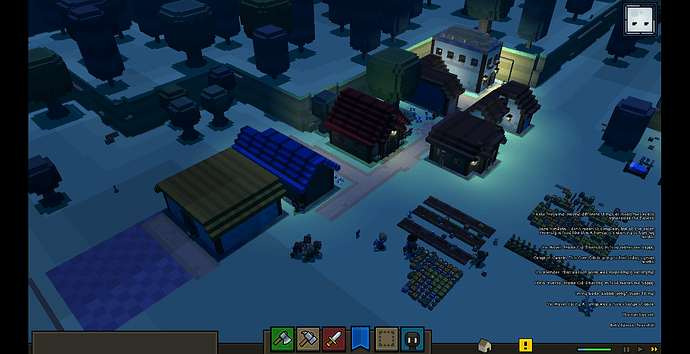 Here’s a day and night picture of the current progress! This is approximately only a fourth of the area I want to develop, so there’s lots left to do! The area in the lower left is my current task, a warehouse area for all of the items and crops so there aren’t goods laying all over the place.

Well, that’s it for this initial update! If there’s anything particular you’d like to see or recommend for the town, mention it and I’ll consider adding it at some point! I’m a bit short on stone, but I haven’t attempted the building glitch as of yet or try the secret mining menu.

Hmm, a red lantern? I have one of those too! (mutters) I bet they stole the recipe from us, no other town could ever be as crafty as Berryburg! Ungrateful lot of thieves, that’s why we put a fence around ourselves in the first place. I’ll have to get my spies to watch Grand Sina carefully. Like I was saying, your city looks amazing! What was that? No, I wasn’t saying anything, no, the next travelers who want to join your town totally aren’t my spies - why would you even think I have spies in the first place? Uh, nice use of almost all the materials, great looking roofs… stop looking at me like that! Fine, I’ll leave!

Well, I’ve got some more updates from the day or so of playing. Some fun, some bad news. 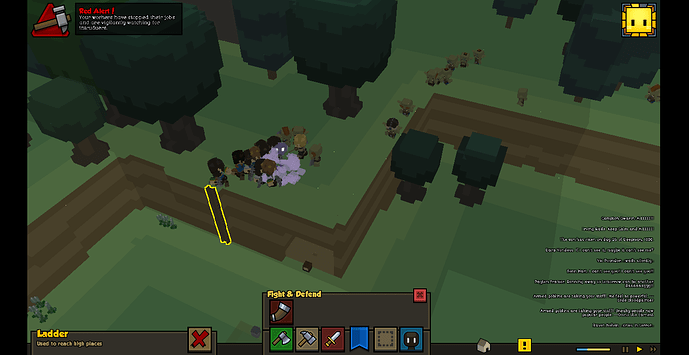 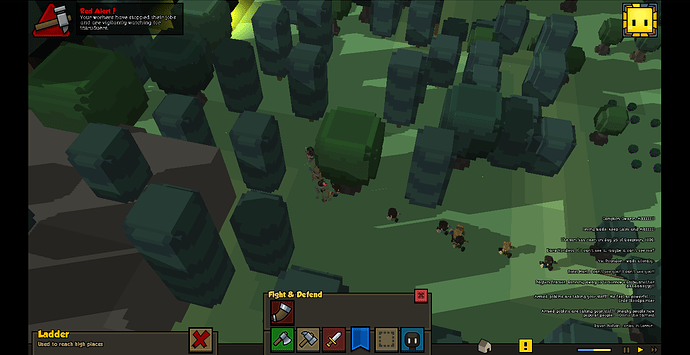 I am happy to say that Grand Sina’s ability to defend itself is astounding. We just got hit with a 30-40-goblin raid when I made a ladder to a nearby cliff, and the settlers annihilated them. Those level stat boosts are nothing to sneeze at! I have never been faced with this many enemies at once, so I honestly had no idea how the fight would go. 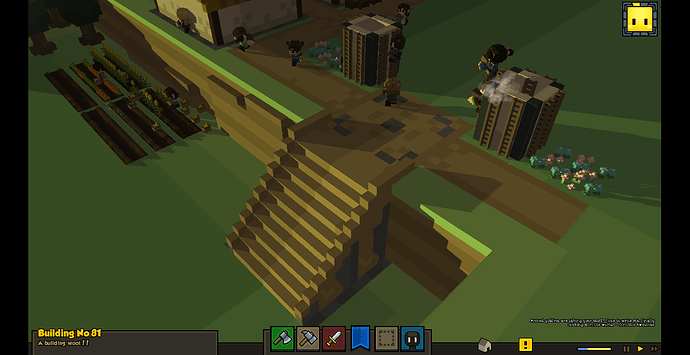 Here’s the main entrance to Grand Sina! I was attempting to make a sort of stone archway entering the place. More on that in a second… 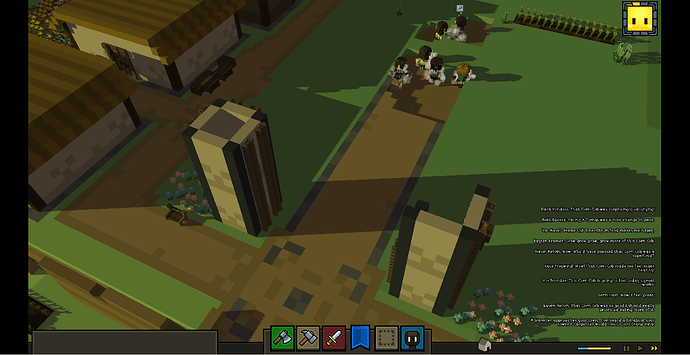 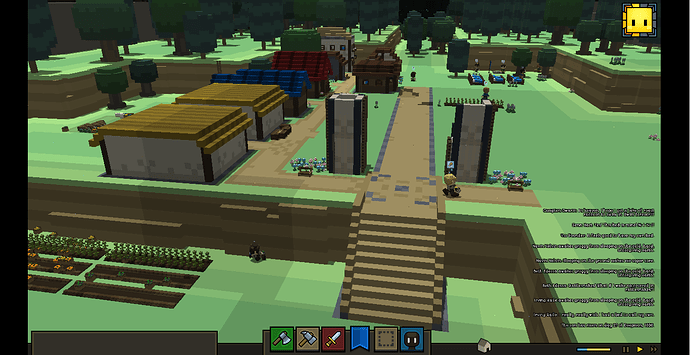 Unfortunately, this is where I might have finally pushed the game too far. It’s now gotten to the point that all construction seems to have a heavy delay, and settlers are no longer harvesting new resources reliably. Plus, they seem to be eating less and don’t always sleep in beds, so I’m quite worried for their well-being. I also attempted to mine the cliff walls instead of harvesting the surface rocks, but it seems to be consistently crashing the game. As you can see in the pictures, my status bar shows the lua and pathfinder constantly freaking out in the lower right-hand side–I can’t remember the last time there was any green in the status bar.

And sadly, this brings me to the worst news regarding the project. The saves are now becoming too unreliable to recover from when the game crashes. The farthest save I achieved was on Day 30, which, upon trying to reload, crashes instantly. I’m afraid Grand Sina’s development’s pretty much ground to a halt. In the end, we had 14 people and a total worth of around 37000 with a happiness of 7.3.

Overall, I can’t say I’m too surprised. I was incorporating numerous stacked building designs (both building stories as well as floors on top of each other) and had floors running everywhere for my roads. Most of the raw materials I needed were now coming from at least 800+ meters away (in-game), and I had 14 settlers at the end–twice that of the starting game. Pile all that on the fact that this is only Alpha 6, and it makes sense why it would crash. The Diadem Project from Alpha 5 was also pretty taxing, but I don’t think it was quite as taxing as Grand Sina was becoming.

Anyway, here’s a picture of the nearly-finished gateway I was able to take before the world imploded! 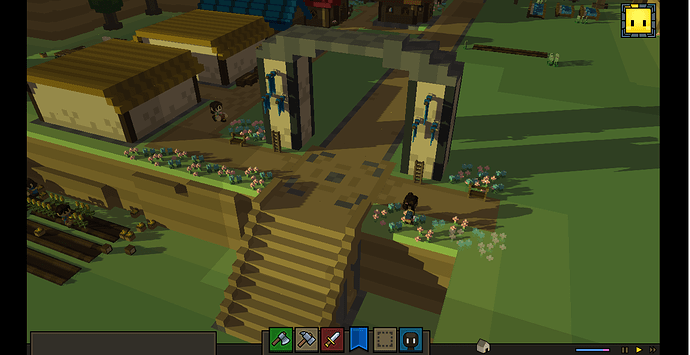 The proud, idyllic arch of Grand Sina is laden with flowers and banners in the humble sunset, as the great stairs descend into the endless plains beyond… I don’t think I could ask for a more poetic close.

As much as I hate to say it, I think I’m going to start another project soon rather than keep going on and on with Grand Sina. There’s not much else I can do reliably or in a feasible timeframe, considering the abuse to the pathfinder and lua going on. I have an idea for a small, fun project I’ve been wanting to do since we got the new roof colors, which I’ll probably add to this thread to keep my Alpha 6 projects together. If there’s anything you guys would specifically like to see me try, please let me know!

very awesome buildings/design. It shall forever be in our hearts. Even after the gods have disowned it, and hid it in the deepest recesses of Lua.

The proud, idyllic arch of Grand Sina is laden with flowers and banners in the humble sunset, as the great stairs descend into the endless plains beyond… I don’t think I could ask for a more poetic close.

agreed… absolutely love the design, and the arch does indeed live up to the name of the town…

Wow, as always, lovely! @Atralane, send us your last good save and we’ll see what we can do to optimize whatever’s hurting.

Wow, this is truly amazing! If you put your Alpha 6 saves up on Dropbox or something, I would love to take a look and see if we can nail some of those crashing bugs or fix the lazy citizens problems.

Wow, as always, lovely! @Atralane, send us your last good save and we’ll see what we can do to optimize whatever’s hurting.

Wow, this is truly amazing! If you put your Alpha 6 saves up on Dropbox or something, I would love to take a look and see if we can nail some of those crashing bugs or fix the lazy citizens problems.

Of course, thank you! Could you possibly PM me about the dropbox and the procedure? I honestly haven’t used it before, so I’m sure how it works.

Thank you for breaking the game now so others won’t break it as much later.

I’ve run into the same issues you did, see my post.

-What are you using for roads? The game has some serious issues if you use flooring material for roads, patios and decks. It considers these areas “buildings” and adds another task to the pathfinder.
-Two story buildings are also super buggy, and it seems like you used slabs for the roof? That’s another building as well.
-I’m at the same point with the goblins, except for me it’s been worse. I ran out of stone and now it’s impossible to get it from anywhere since quarrying it causes crashes. Going into areas I’ve previously discovered will spawn a massive gaggle of goblins.