For centuries our ancestors have lived by the sword. The sword is life
and it is death. The sword is an extention of our spirit, it’s own
living thing and with it we will defend our people.
We are Nihonjin, the people of the land of the rising sun.
##What Is Nihonjin?##
Nihonjin is a Stonehearth mod with a little Japanese flair. The mod aims to help transform the world into a lush dynamic world based on the Japanese culture to give an interesting twist on your Stonehearth experience.

Installation
Extract the contents of the .zip file into your stonehearth/mods folder
Special Thanks
Special thanks to @Froggy for his his troubleshooting skills with the Shoji Doors.

@Pandemic: Most of the art for the mod.
@RepeatPan: Assistance in squashing bugs.
@Froggy: Troubleshooting

Cool I looking forward to see some first look pictures

I love the Idea to have Samurais in the game.
So this ist the second “historical” mod I think after my Rome mod. I don’t know if the Norsemen mod is realy “historical”?

Well you are just in luck, I have two models to display!

Earning their way thought the ranks (and as your smiting techniques improve) , these elite soldiers are granted permission to wear a light type of armor known as tatami gusoku.

@Moe2212 I’ve been looking at your models for your mod. Impressive.

I do believe that the Norsemen mod could be considered historical.

wow really good models I love japanese culture so much,I would download this mod for sure. You should upload a few more models I would love to see what you could do with this.gj

Ashigaru are normally just very basic soldiers within the Japanese army. They are almost always composed of poor peasants who have been conscripted into service, and more often than not cannot afford much armor or high quality weapons unless supplied so by their daimyo, which is almost never the case.

Dunno why I just taught a history lesson there, but y’know… the Sengo Kujidae (if I’ve spelled that right) is one of my favorite historical periods. Gruesome, but cool. Tokugawa FTW.

Nice models, though. But you should think on varying up the colors a bit. Perhaps not color code the hats so perfectly to the armor? All the colors just seem to meld with each other too much.

welcome back to the fray @Avairian! was looking forward to updates on this thread… glad to see you’ve spun that off into a mod idea, that is getting nicely fleshed out…

@bollinger41463: Thanks! I’m trying to iron out the military class progression at the moment. I’ll try to upload another model or two tomorrow.

@RoseyNineOneOne: You do make a point there. Maybe a better term for the Elite armored soldier’s would be Gashira, since them being sort of like officers there would be a better chance of them receiving armor, especially since the tatami gusoku was a lighter made armor than the yori.

Speaking of Tokugawa, I have a mini replica of Tokugawa Iayasu’s armor on my desk that I’ve been using as inspiration for the Samurai Class model.

I see what you mean by the colors meshing together. I might try messing around with the colors a tad, maybe add a little red tint to the spear man’s helmet?

@SteveAdamo Thank you! It’s good to be back! Yeah not sure how I managed to convince the inexperienced programmer in me to make a mod but I figured it’d be best to start off with a fresh topic.

how about including all Asians, renaming them The Orients.

not to be racist, maybe u can make the human model have squinted eyes instead the normal vertical slot.

not to be racist, maybe u can make the human model have squinted eyes instead the normal vertical slot.

That… wouldn’t work very well. I just tried it in Qubicle.

It looks extremely racist and stupid. Then again its not my topic. Just stating my opinion, and I hope Avairian takes it into account.

I’m trying to iron out the military class progression at the moment. I’ll try to upload another model or two tomorrow.

They are almost always composed of poor peasants who have been conscripted into service, and more often than not cannot afford much armor or high quality weapons unless supplied so by their daimyo, which is almost never the case.

Well, that kind of depends on the clan and the era. The Takeda Army on the Takeda half of the Kawanakajima screen has most of the Ashigaru armored, while the Uesugi are much more of a mixed bag. The later Tokugawa forces were also often noted for being well equipped. After a major victory there would also be spare armor from the the losers to pass around.

That doesn’t mean you’re wrong either; most of the Ashigaru should be unarmored; but there’s historical room in a class tree for armored ones as well.

Spent a little time today in PowerPoint and created this:

Military Progression 0.1.png894×636 456 KB
Basic outline on how I’d like the military to progress, no where near final. lols

Can’t seem to think of a good alternative to the “Recruit” for the lower level sword and spear paths. Also debating on weather or not to use the English or Japanese names for the classes (and how to go about some of the translations.)

I’d love to go all out because I’m a Japanese culture nut like that, yet I don’t want it to become to confusing for other players.

Squinted eyes look kind of odd in qubical in my opinion plus would make it more work for me to revamp the whole facial expression system when it’s implemented.

@wminsing: I took that into account when I created this class tree. Armored units are higher tiered.

you could go the simple route, and try:

Not sure why I didn’t think of that. /facepalm

Either “Junior” or “Novice” would work. I’ll have to go back over that before I start charting out this complex looking katana smiting process I just sketched out. o.O

In the meantime… Here’s a glimpse at the Level 1 Samurai Class:

and i’m digging those topknots…

Shoshinsha came to mind. Also in the martial arts world training is split into three (actually four) phases known as Shokyusha (low class), Chukyusha (middle class), and Jokyusha (high class). I’ll have to double check with my translation sources but if I decide to go full out Japanese it might look something like:

Or nothing like that (The Japanese language is pretty finicky

I hadn’t really though about Japanese ships. Don’t know much about them to be honest. So I decided to do a little research and found this: 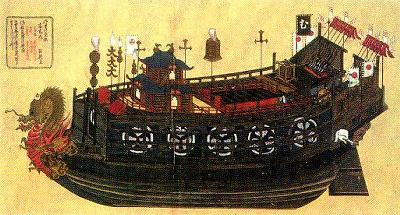 Nowwww I’m thinking about it!

Sooooo many mods and they all look sooooooo good i can’t wait to get to the beta to play and see how the mods progress!

Spent a little time working on the “Elite” armored soldier class models. I wanted each “Elite” class to have the same type of armor, but my main issue was trying to find ways to make classes recognizable. Here is what I’ve come up with so far:

With this solution I decided that each class was to be identified with a specific colored sashimono (flag), red for spear-men and green for archers in this example. I’d like to make it where you can choose the color of armor you’d want for your soldiers, (So you can have a rainbow colored, class color coded, or a uniform colored military depending on your play style) while still allowing each class to be recognizable.

As I couldn’t think of a way of attaching sashimono to the soldier’s back without it going though the helmet, at the moment are just floating behind the character. I kind of like the way it looks though and I personally think it goes with the Stonehearth style.

Thoughts on this approach?