Hello, everyone! I was playing a little today, starting a new game. Initially, I was looking for a small valley between some mountains to create a ‘mining town’ project, and in my re-rolling of the game generator, I see this: 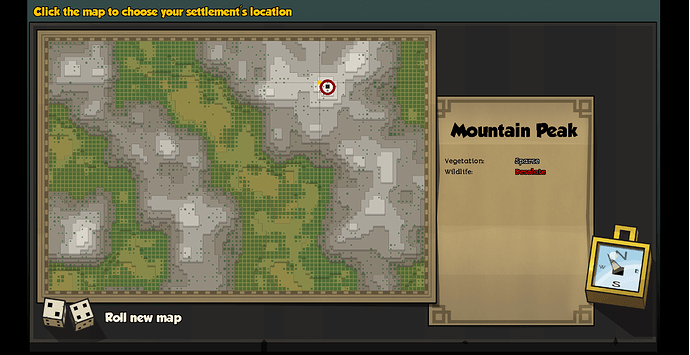 –“What is this?? I don’t remember weird black summits/biomes in the game yet… some kind of glitch?” 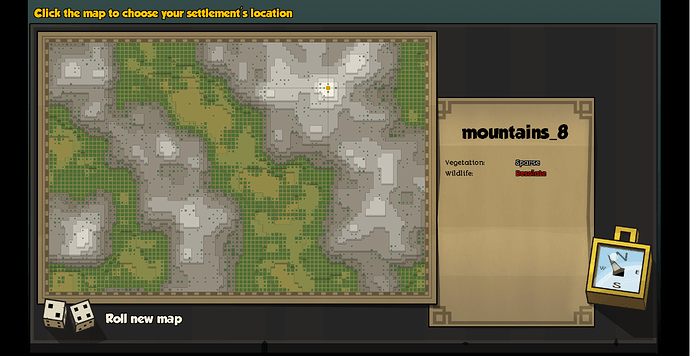 Apparently, my map rolled a mountain elevation that isn’t officially in the game yet. Huh. 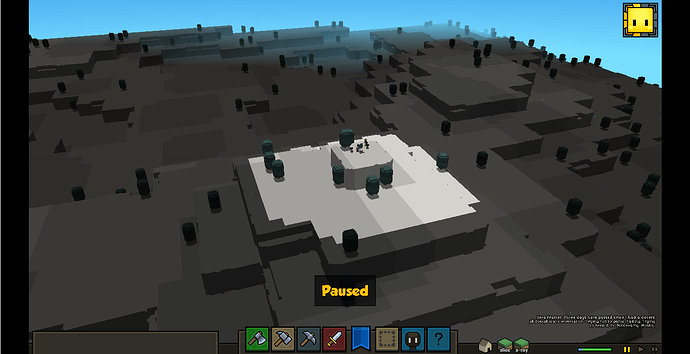 Oh yes, does it work.

This is going to be a fun playthrough.

And so, my next little exploiting project began.

(Man, the Mason is going to be busy this game…)

Maybe a prequel to the long awaited dwarfs?

Far over the Misty Mountains_8 cold…

I do pity your poor masons though … be sure and give them some comfortable dwellings at least!

Question: how high a tower can you build there

Question: how high a tower can you build there ?

That would be a sin if I didn’t at least attempt a tower on this peak. So, needless to say, I tried something stupidly difficult for the game in its current state! 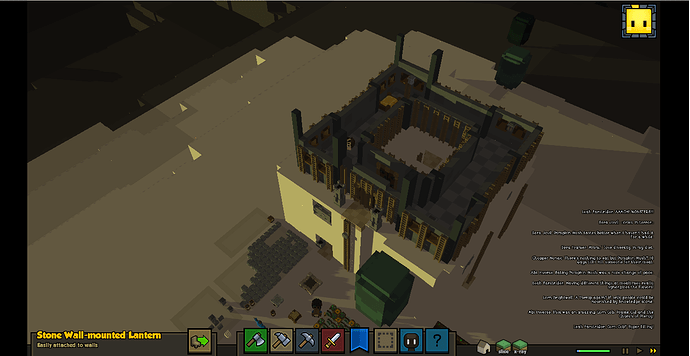 This was about as far as the first design got. Stonehearth already has issues with open-center structures at this point to begin with, so add the pathfinding issues of multiple stories AND mining, and the resulting meltdown is not so unexpected. 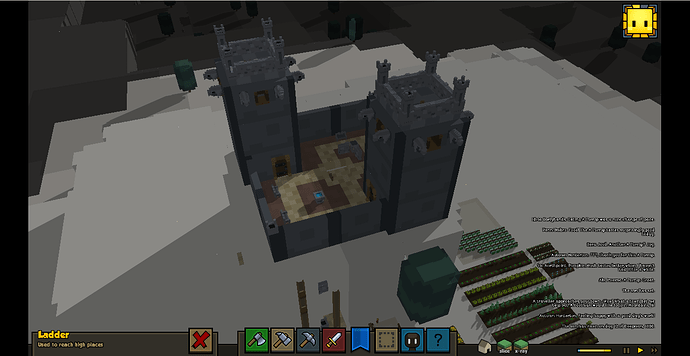 In fairness, it’s quite a simple construction. It’s composed of two three-wall-level towers with torches and walls on the top, with a garden plaza below that’s surrounded by stone walls. The central ladder leads down into the peak, which has been hollowed out for quarters and supplies. 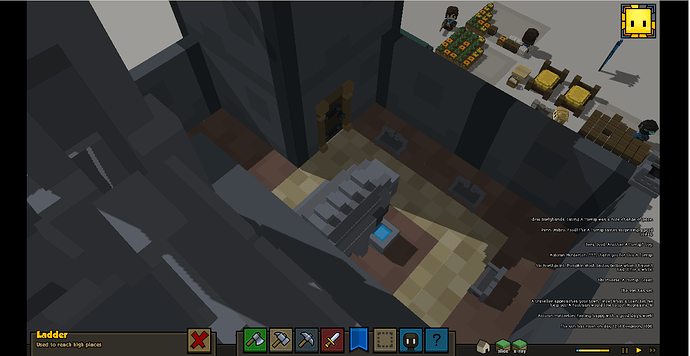 So, here’s the layout of the peak as of now! 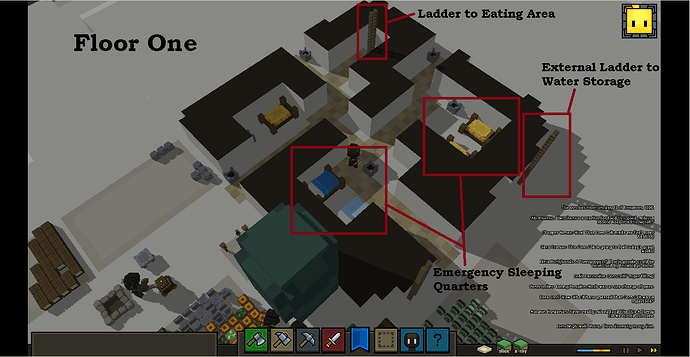 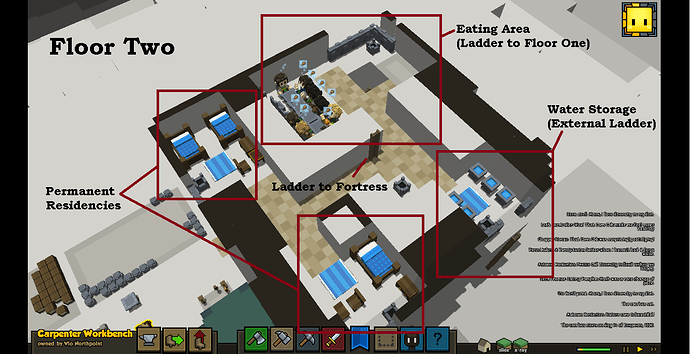 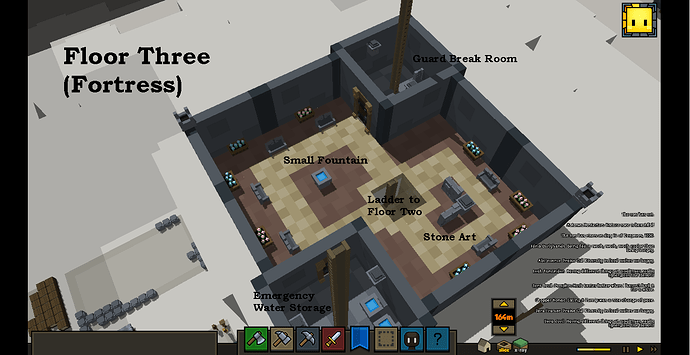 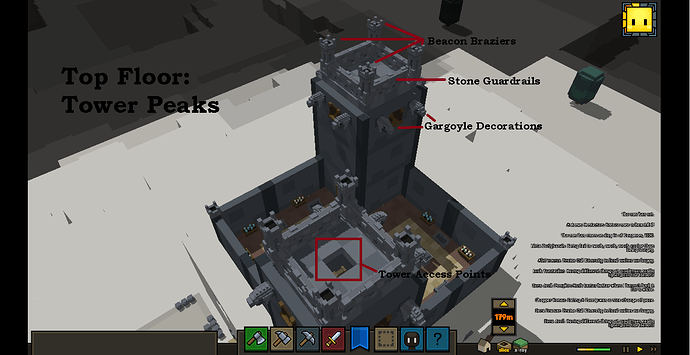 As you probably notice, most of the constructions in this project so far have been stone-based due to the extremely limited supply of trees on the mountain. In order to prevent starvation throughout the settlement, I had to immediately assign a Farmer and start producing quick-growing turnips and pumpkins until we had a stable supply and could branch out to other crops. All in all, though, the colony is thriving! We’ve had zero encounters with goblins, although it’s likely we’ll start seeing some as we journey down the mountain’s sides for more lumber.

So far, so good! My next step is to start adding some warehouses and workshops for the settlement so there’s not a giant pile of stuff right outside the Mountains Eight Fortress. Judging by the improved pathfinding thanks to the addition of roads in this Alpha, this shouldn’t be too difficult. After that, if the project stills lives, I’ll be adding more defensive walls around the summit and start making a massive fort, with the current fortress as the keep.

Hope you’re enjoying the project so far–I currently am! The Mason and its recipes seem to be perfect for this project (challenge), so I’m having fun with the elements I was missing during the Lias Cathedral Project I did in Alpha 6.

And so, I’ll end this update with the obligatory nighttime shot of the project! 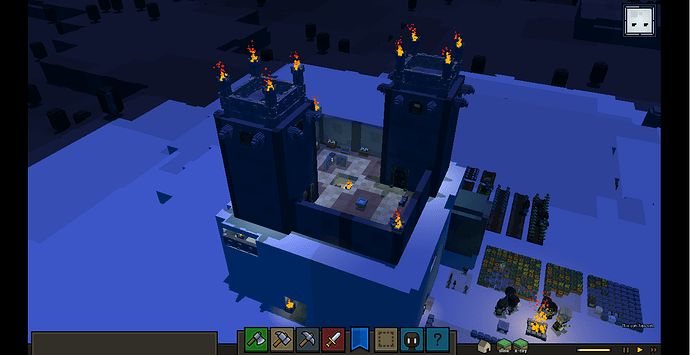 immensely… your efforts are motivational! (sprinkled with a little bit of envy/depression)

to be honest, the title of Master Builder just doesn’t seem adequate any longer… time to cook up a more fitting title!

sprinkled with a little bit of envy/depression

This sums up my feelings right now, I wish I was less distracted by other games and had more time in general.

Well, Mountains_8 MIGHT have just been prematurely cut short. We recently had a new build released to Steam, which may mean I can no longer play the saved games.

Do any of you know if it is possible to revert to an earlier beta version in Steam for Stonehearth? Up to this point, I didn’t have to worry about upgrading to a new unstable version. With this project still technically working, though, I was hoping to see what else I could do with it until moving on to later releases.

EDIT: @Tom, @sdee, do you folks on the Radiant team know more about this? I’m sorry to say I’m a bit new to Steam and its system of updating.

to a previous unstable build? I’m afraid I don’t know … adjusting Steam will simply roll you back to the most recent stable (A6) build…

I have a save from r183. When I hit load game, it says the save is from an incompatible version. Yet, it loads fine. [I might run into problems down the road, but so far everything seems to work.]

I hope this works for you! It would be a shame to see Mountains_8 go to waste.

to be honest, the title of Master Builder just doesn’t seem adequate any longer… time to cook up a more fitting title!