Since the poll was quite… strongly wanting the golem

came to show you the concept art for the Golem i will be making! 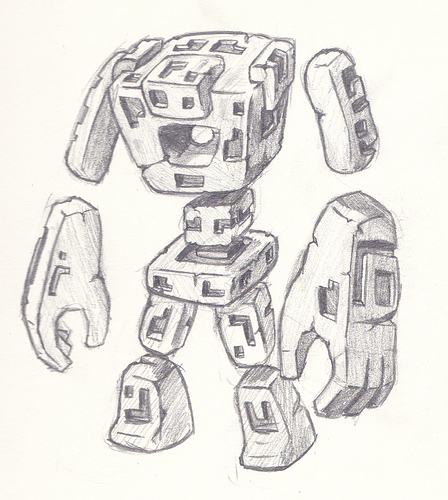 and there will be less carvings(?) so it’ll look
more cute

It’s … story(?) will be that it’s unclear when it was built, who was to build, how did he/she build it and how it moves to this time

Also, Since this model will be a big ‘Chunk’ of cubes

Now with the modeling out of the way

you could actually expect some amount of drawing from me! (yay!)

That’s a fine looking golem. Although I’m typically more of a flesh, bone, iron golem type of guy… I’m really digging the art here. It looks like it fits.

Edit: btw I say keep the carvings. I feel it still fits the vibe without being overly cute.

That looks pretty sweet man go for it.

i will keep the carvings, but i think it’s a bit too much of it, maybe it’s because it’s colored so dark, but we’ll see that

oh man, the amount of lore behind a detailed golem like this is unthinkable. What I wouldn’t give to be a part of its conception haha

If you could somehow incorporate “Emeth” on it, that would be pretty slick.
BTW Nice work!

It is “Mabinogi” Online game’s golem, has very simple shape.

I wish your concept golem make by vox3D.

that looks real nice, but probably a bit too big for that
but i will use it as a example i i need to!
thanks for showing me it!

). To me, that looks more like an earth elemental.