He fellow stonehearth fans and Radiant!

I have played around in alpha 10 and it seems like I can’t make this house when i’m trying to. The workers don’t react when i press build. You can see the house from different angels here.

My guess is that it has something to do with the “annex” where there are no roof.

(the build floor on 3rd picture was me trying to cover some stairs incase they were the cause, but i didn’t work)

Out of interest, how many days into the game was this? I get this a lot (almost every building) but it seems to happen more the longer I’ve been playing a town

Can you tell us what was happening during the bug occurred?

Out of interest, how many days into the game was this? I get this a lot (almost every building) but it seems to happen more the longer I’ve been playing a town

It was the first day, and i saved the house and tried to build it again just to be sure. It has somehting to do with either my computer or the way the house is build up

Can you tell us what was happening during the bug occurred?

Nothing. My workers just finished cleaning all the wood and was idle at the fireplace. No debug messages came.

Forgot this: I am using windows 7 (64 bit) and the latest steam push.

I haven’t done exhaustive testing, but it appears that any non-rectangular footprint won’t be built. At most, they’ll dig the space for the ground floor, but won’t start building. Rectangles get built; anything with a reflex corner / interior angle > 180 degrees won’t even get a floor, much less wall posts or the rest.

I’m new to the game, and i wasn’t able to build a rectangular house… The hearthlings came and dug out the floor, but didn’t put anything down. And then they just sort of gave up…
I don’t have a screen shot of this… My house also had an empty spot without a roof, and a second floor… 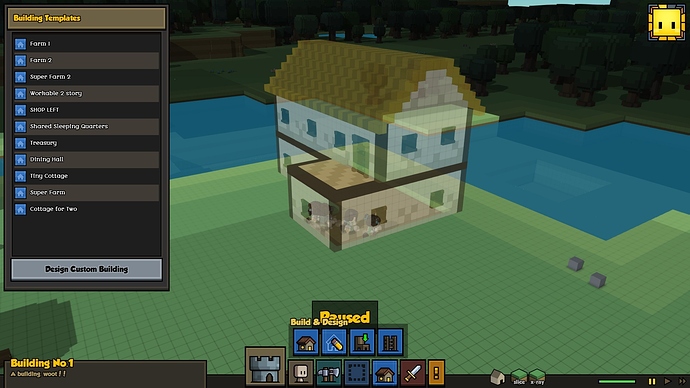 If you look here you can see I have used a mixture of Auto-wall, slabs and also Manual Walls, the latter to separate the workshop and living quarters of the upper section. 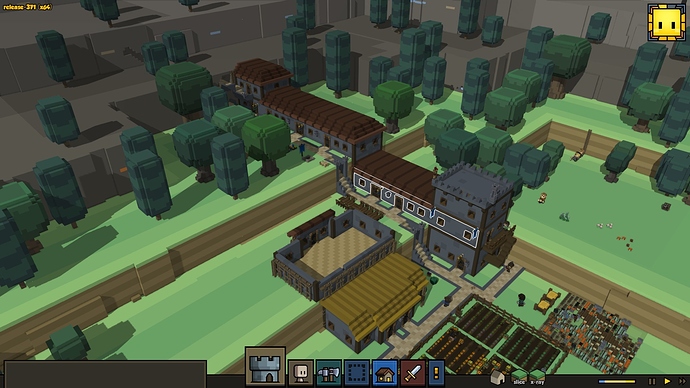 I am using the latest version…

I am using the latest version…

could you be a bit more specific? im guessing you mean R-374, but hey, they could update the game any time and then that “latest release” would no longer hold true

ok, so the game just updated recently to R-374, R-345 was the update from before that. when you get the time would you be able to check if you still have the problem?

edit: also those numbers, 345, were the build numbers, when someone asks what build/release build your using check those numbers they change every update

Sure I’ll try that, thanks!

Hey there, I’m a long follower but only playing since Steam EA release.

I have a similar problem, running R375 (x64) on Win8.1.
The predefined templates work, custom buildings and custom templates only sometimes.
It seems, when a custom building gets somewhat complicated, it doesn’t get build.
The problem doesn’t depend on simple shape foundations, unlike HamoPeche described above, i have tried two buildings with similar shape (both rectangular with little extension for the doorstep), one gets build (simple two stories, no stairs, roof), the other doesn’t (3 stories, custom roof, custom stairs).

Will provide screenshots if needed, but would run a test-world for that.
Additional Info: Happened since first day in game, saving and restart doesn’t help.

But, just to say: Great Game even now with the bugs!

EDIT: since I noticed there are also some problems about buildings with 3 or more stories around, I should mention that as long there are custom-built stairs (or anything else with slab tool, I guess) involved, the problem persists for 2 stories as well.

I’m having the same problem with this house: 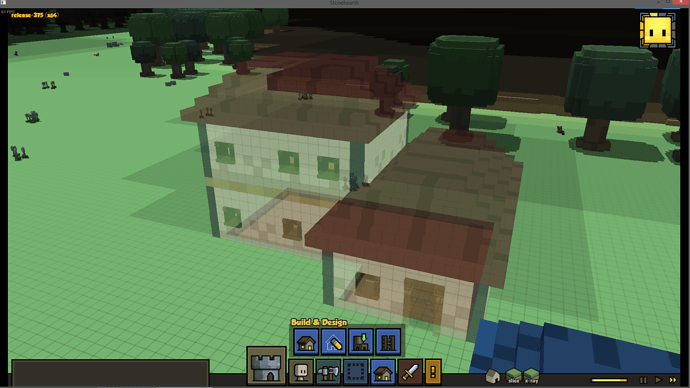 I’m on build 375. with windows 8.1, 16GB RAM, Nvidia GTX 765m. I’ll hit the build button and confirm but nothing happens. I’ve saved the building and started a new save and they still wont build it. (yes, I have more than enough materials, besides, they wont even dig the foundation) Here’s another shot: 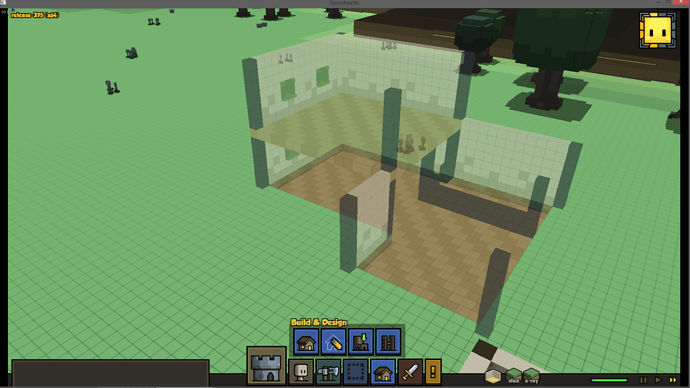 I had built the shared housing template and the 2 bed template which were fine. When I tried to build a second 2 bed house they stopped half way… still needs the roof and scaffolding is still up. But they won’t finish it and just wander idle.

@asger1231 I had a similar problem as you. A building that the hearthlings refused to work on. At first i thought it was due to lack of resources but they wouldnt even dig out the ground for a foundation (similar to what you are describing) and the thing causing it to glitch in my case was a slab/second floor placed ontop of the walls in preparation to expand later on in my game.

My workaround for this was basically to removed the second floor flooring (as i see you have aswell, the flat roof in your blueprint) then they should start working on it. Try it out and let me know if it works!

@zigworf if they dug out the place for the foundation but aren’t constructing the floor then it sounds like a material error. Like if you try to make a stone floor but have no stone resource? Or similar a wood floor but no wooden logs cut down yet.

I had plenty of logs… And this was in the last build 345.
Now its perfectly fine for me, in the current build 375.
Thanks for your concern.

Now its perfectly fine for me, in the current build 375.

well then, i guess @SteveAdamo @Relyss should close this then