Ogo and his army invaded my town, but when i defeated him, the under siege effect never ends ans his music never stops too, is there any console command stop it? I tried to change the weather with console commands but have the same issue, never changes alone 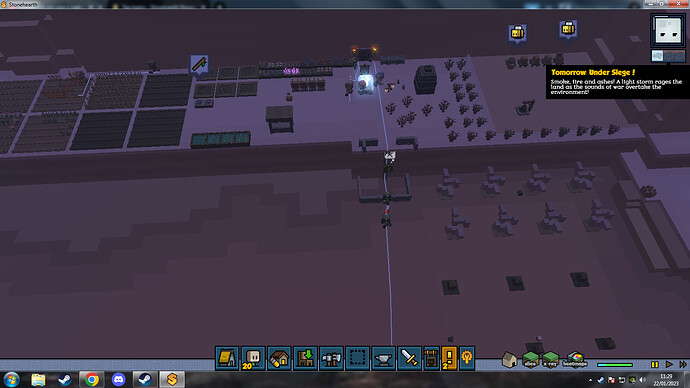 This sounds like a bug, I’ll take a look.

As for a solution to your issue, try enabling the DebugTools mod on the “Mods” screen and then load the game… Once it starts, you should see a set of tools near the clock on the top right, click the “Lua Console” (looks like a blue <) and then paste this and press enter:

Let me know if it works!

Edit:
I’ve located the issue and fixed it for the next ACE release

Thank you for bringing this up! The fix won’t “save” games that are already stuck, however it will prevent others from running into the same problem! But you can (and should!) still try the solution above!

I tried the comand but only got a error message

it’s ok not to solve the problem in an existing save, but it’s good to report, meanwhile i manually change the weather

I would like to ask a question the mechanics of how the enemies spawn can be changed?, in the dwarfs map, due to having many elevations, the enemies are constantly trapped and accumulate causing a huge lag over time, I saw some people reporting this too

Try this instead, also on the Lua console:
stonehearth.weather:set_weather_override(nil, 'player_1')

This one should work!

As for the second question, unfortunately that is a bit of an annoying issue… There’s a balance to be found on the “restrictions” of spawning code, but it’s hard to get there. If too restrictive, nothing might ever spawn if the terrain is difficult; or it can be very demanding/laggy for the game to find a proper place. If not so restrictive, the issue you described happens.

Unfortunately the best way to deal with it right now is to build a bunch of ladders around your general area, connecting as many levels as you can, so they can use them when they spawn there.

ITS WORKED thanks for the Support, waiting for the dwarfs

I finished everything I had to do in my current save, so I decided to do some tests, apparently this weather bug is related to any kind of big event related to invasions, Ogo’s army, all the gongs, orc queen in the orc campaing, a rain that never ends starts in all of events, and when the titan is defeated the “weather” continues to happen with all its effects,storms and monster, fortunately the command you gave me works in all cases

Hmmm, not really. I actually fixed the bug for our next release and it was related to the “trigger” used to detect if Ogo was defeated or not, it had a couple of flaws due to the quest having other resolutions (by using the Flute or not, killing Ogo before Mountain, etc.)

The orc campaign/gongs don’t change the weather at all (if you got rain during their fights it was a coincidence) and the Titan does bring their own weather (Titanstorm) but it is correctly cleared after the Titan is defeated, never seen any reports of it lingering.

oh ok, maybe it was just a coincidence that something similar happened in the other cases