If you guys are looking to get a next-gen Console, there is no better time this year to pick one up, as I have found two special and limited Xbox One bundles. Let’s get started, shall we?

Right here, we have our first Xbox One Bundle. Microsoft has recently announced at Gamescon that they will be releasing a special limited white version of their flagship gaming device, the Xbox One. But that’s not all. With this limited white version of the Xbox One, included is the anticipated and quite frankly badass Xbox One exclusive game Sunset Overdrive which is developed by Insomniac Games, the developers of such famous franchises such as Rachet & Clank and Spyro the Dragon. But wait, there is more. With this Xbox Bundle, you will also get some exclusive In-Game Contents like the Nothin’ But The Hits Gun, Hardcore! Hammer, and a Fizzie Outfit for your Xbox Avatar.

This special Xbox Bundle will be $399.99 or €399.99. You can pre-order yours right now at the Microsoft Store. But don’t be late to the party! This offer will end on the 28th of October this year, when the game bundled is released.

For more info about Sunset Overdrive and the Xbox One Bundle, visit this or that link.

As with the White Xbox & Sunset Overdrive Bundle above, Microsoft has also another Xbox One Bundle in the works too. This time, it’s a sweet lookin’ custom Xbox One. But wait! Call of Duty, the famous, as well as notorious modern military FPS published and formerly developed by Activision is going to have their newest game packaged with it. The game is Call of Duty: Advanced Warfare, developed by Sledgehammer Games. But this Xbox One Bundle is not complete with it’s In-Game Contents. The ones included with this a unique Exoskeleton, Advanced Arsenal which features an EM1 Quantum Directed-Energy Weapon and a Bullet Brass Exoskeleton, and the Digital Personalization Pack. But I haven’t gotten to the best part. Unlike the other Xbox One Bundles. as well as any other Xbox One, this special limited version will have the standard 50 Gigabyte internal HDD upgraded to a 1 Terabyte internal HDD. Holy. Crap.

This special Xbox One Bundle will be $499.99 or ranging from €429.99 to €499.99. You can pre-order yours right now at the Microsoft Store. But like all good things, they must come to an end. This offer will end on the Third of November this year, when the game bundled is released.

For more info about CoD: Advanced Warfare and the Xbox One Bundle, visit this or that link.

Gamescom 2014: Call of Duty: Advanced Warfare Xbox One Bundle to Have 1TB Hard...

Advanced Warfare gets the bundle treatment, and a huge hard drive this Fall. 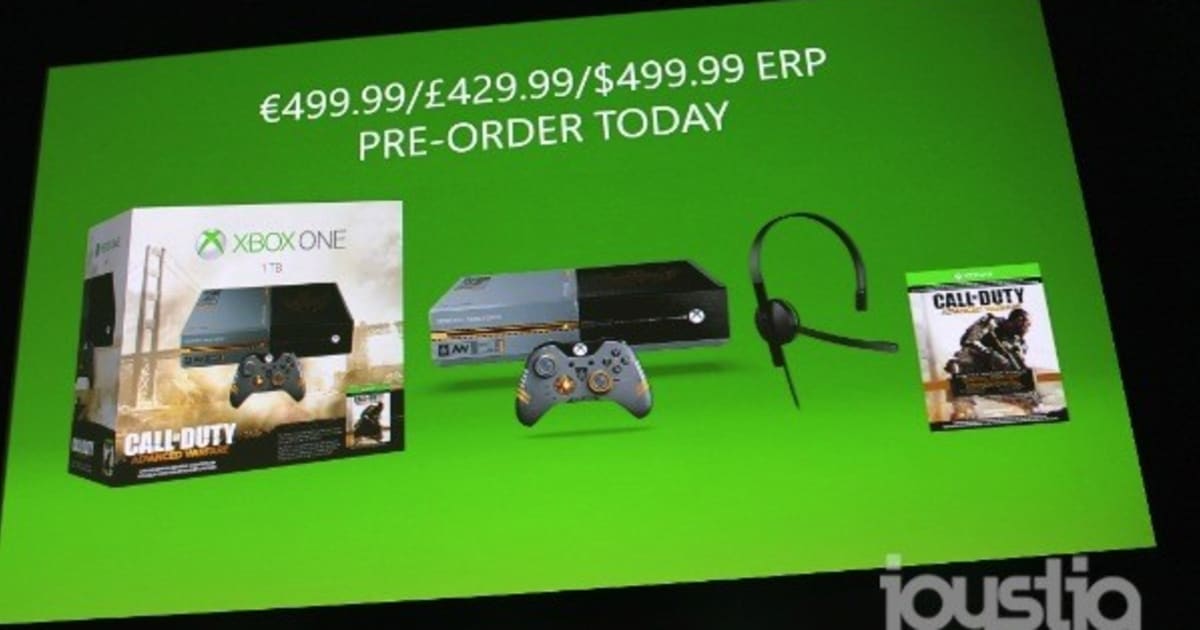 Microsoft's second Xbox One bundle of its Gamescom conference was for another big-hitter, namely Call of Duty: Advanced Warfare. The limited edition bundle com... 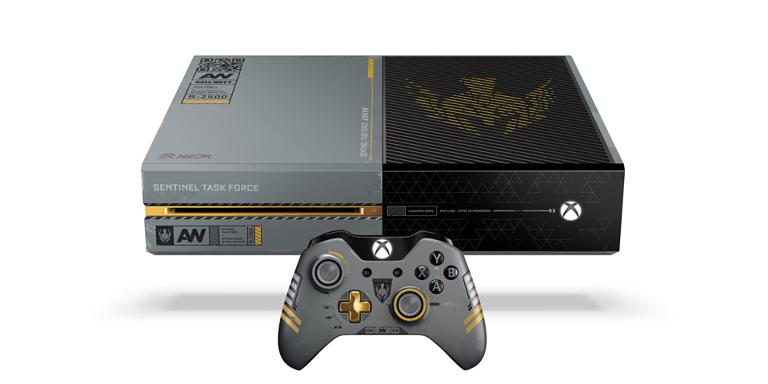 The Advanced Warfare console bundle is available to pre-order for £429.

That is all the bundles I could find. If you’re interested, take a peek.

So, did everyone just skim this because it was for Xbox One?

You do realize that Microsoft has been improving their console ever since they screwed up royally last year, by making good games for it, removing controversial features, adding cool stuff to it, updating it like crazy, doing stuff like this bundle, etc.

Or maybe it’s just because it’s late at night. it’s probably that.

Well I for one am waiting for a Halo Xbox One… although I’m starting to doubt they will make one for The Master Chief collection… Still I hope.

I love how you formated this post though, a linked source, picture, links, italic words, and lots of information. I like seeing detailed posts like this and wanted to take the time out of my night to say I appreciate your time and effort into this. =) Add me on XBL if you wish, OxK Jesse.

Hey, thanks for the compliments!

Also, I don’t have an Xbox yet, I have based this all on information, hype, and word of mouth.

But, today I have just started collecting free junk off the sides of the streets and on Craigslist, so I could then fix them up and sell them in a yard sale or on eBay, I will also start doing oddball jobs like yard care, dog-walking, etc. This is all so I can afford one before the deadline.

This is all so I can afford one before the deadline.

I’d save the money for better PC components personally

. Never really understood the console thing (“guys, get an adapter for your controllers and an emulator already

Well, me and the rest of the PC master race

I’d love to have a next gen system, but I can’t justify it right now. Having a baby kind of limits my frivolous spending.

Since I’m a 3d artist/motion graphics guy, I can justify getting a beefy pc instead and using that for all my gaming needs.

I pretty much skimmed. I have an xbox 360 Elite with 20 hours on it, in its original packaging. It wasn’t intentional but I prefer playing PC over console so any game that comes out for both or eventually to PC I just wait and get it for the PC. After seeing that the 360 was a colossal waste of money for me I stopped buying games for it and decided that getting a console is pointless because I will never use it enough to justify the cost. I’d rather just throw the money into a good gaming rig.

I’m unsure if my wife will be getting the xbox one. She never heavily got into PC gaming aside from Minecraft and Age of Empires. I will be willing to bet if a Pink Xbox One, or a Halo edition becomes available she’ll pounce on it. I am hoping I can convert her to PC gaming and just give her this rig with some upgrades before that happens though.

This thread was made for locking and that’s just what they’ll do. If you two don’t knock it off. It’ll lock all over you.

This thread was made for locking and that’s just what they’ll do. If you two don’t knock it off. It’ll lock all over you.

Fine words that I agree with.

Guys, can we please just get along?

Guys, can we please just get along?

I agree. This particular forum has been one of the most well mannered online venues I’ve ever had the pleasure to visit… lets not tarnish that good reputation. We should just chop it up to people preferring what they prefer, there is no point arguing the point or name calling. Besides we’re all Stonehearthians at heart, right?

I’m gonna delete your comments, pretend they never happened, and steer this train back on track.

Please keep things on topic, and don’t discuss the benefits of one platform over another, in all honesty, nobody cares.

Double Edit: @epicdwarf I know you’re annoyed, if you have an issue take it up with me in a message. Any comment prolonging or exacerbating the disagreement will be removed - it isn’t needed.

OK then. Back on track!

Only a few hundred miles to go until we hit the main road this thread was taking.

Edit: The OP has been updated.

I’m not personally sure if I’d include the Madden bundle - it’s not really a bundle … just an Xbox one with Madden for Free.

Edit: I should probably justify the statement - it’s not an out of the ordinary bundle, it’s just a bundle that goes hand in hand with a big game release - similar to the FIFA 15 bundle:

I think the Sunset Overdrive and CoD bundles are definitely worth noting as they’re actually something different, at least visually (and the 1TB Harddrive).

OK I’ll remove it. It’s not that unique anyways compared to the other two and the deadline is in 3 days.

I just noticed. The Exoskeleton feature in CoD: Advanced Warfare are really similar to the Titans in Titanfall. I’m not calling it a ripoff, but it’s kind of weird seeing the similarites. It’s also nice to see something new in the CoD series for once.

If i remember right Call Of Duty Advanced Warfare has been in the works longer than Titanfall but i might be wrong.

Someone find me a pink one so I can be hubby of the year? bonus points if it comes in a nice bundle haha.

Here is a good website to get a paint job for your Xbox One or your other devices.

I think you’re right, it has been in development for around three years now.