Tom added Medic to the Trello a few hours ago. Let's chat about it!

Hello everyone; Happy Tuesday/Wednesday,or whatever day to you, I hope it’s a good one!

So I just did my daily browsing of the Trello and it seems that about two hours ago, as per the typing of this thread, Tom threw in the idea of adding a medic class to the roster. Now personally I don’t see a need for it as a class like the Engineer could probably help with field healing or build machines that can heal injured Hearthlings. The joy of the Discussion board though is we can all speak freely and throw our ideas around and see what sounds great, interesting, or otherwise.

So my two starter questions are:

well we all knew there was going to be some kind of healing class at some point… not sure how much use it would be though.

With the addition of much slower health regeneration in the future, as mentioned in a couple streams, a medic might be the fastest way to get your troops back in the field.

I’m kind of looking forward to a medic class, Not only would I have a reason to build a hospital, But I remember months ago the idea of disease and stuff being added. Not sure what happened with the idea or if it’ll ever happen but even if it doesn’t, I like the sound of the class!

Everything is up in the air, the class hasn’t been fleshed at all.

not entirely true, the medic has been talked about during some of the more recent streams, but i guess that still doesnt give much to go off of…

what we do know for sure is that when combat changes the “auto-healing” will be slowed down quite a bit, so you’ll need field medics to heal your soldiers faster.

At this point I play once or twice every major update and it’s always the same old song and dance. Dig a big ol’ hole, add some rooms, everyone lives in the cave. Granted this is my curse from years of Dwarf Fortress and a year or two of RimWorld, but at the moment there isn’t too much of a reason to build anything in Stonehearth as the Hearthlings don’t really seem to care at all.

Ah well, sometime down the future!

as the Hearthlings don’t really seem to care at all.

I don’t get the idle bug as much as I used to, But sadly I still see some cases of idling hearthlings or them just refusing to do stuff, But hey, Maybe the Medic can cure the idle illness!

So my two starter questions are:

What do you think about adding the Medic as a general class for Hearthstone?
Would the medic be more of a supportive class brewing potions/foraging for rare herbs/mushrooms or would you expect a more frontline defensive unit in your opinion? (Everything is up in the air, the class hasn’t been fleshed at all.)

Well, the Medic would be an interesting class to add. The cards it would add to Hearthstones already vast pool ad open up a potential of many more deck selections.

Medic in STONEHEARTH, would be really fun. I feel like the Starcraft squad list would be good for it in a defensive party (3 Soliders per Medic) and for defence having more medics would probably be better, but that depends on how it works out.

man I wish I had a reason to actually make buildings…

But they’re so cute

I love the new desert ones

Oh I agree, my compliments to the team for the beautiful piece of art that is the entire game, but the buildings at the present time are a touch useless.

A fix to this problem might be that the professions need some sort of building for them to work at their profession. i.e. this medic needs a hospital to take in injured people, a blacksmith will need not just his items but also a “workshop” building. As for the carpenter/potter they just have increased efficiency if they get their building and footmen won’t necessarily need a barracks, but will need one to equip higher weapons, along with armor and shields.

I’m all up for a medic based class to go along side the footman.
Also maybe introduce injuries to go with this, having a blacksmith “burn” himself or a farmer faint from fatigue, would be a very nice touch to the game

they can add different healing herbs to the list of stuff farmers can grow.

I just dont want a medic running out into the fight and trying to restore thier health on the field. I would like it if thier was like a make shift carier that they RAN WHEN THE COST IS SOMEWHAT CLEAR so they dont die on the field trying to heal a footman.

I hope the Medics have a Red Cross nurse hat

I hope the Medics have a Red Cross nurse hat

well here’s the kikcstarter class tree which gives a rough idea of what the classes may look like, 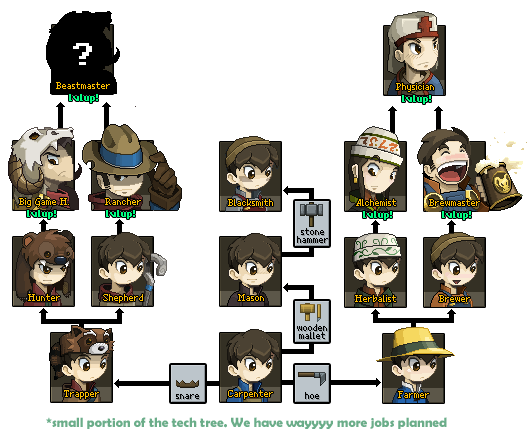 based on that, they might just end up having that nurse hat you wanted

I’ve always wondered with the Kickstarter tech tree why the “physician” is above both the alchemist and the brewmaster. I get the Farmer

Physician progression, but the brewing one seems a bit off…