Three errors while playing and can't load any game

The first two errors came when i pressed Esc. 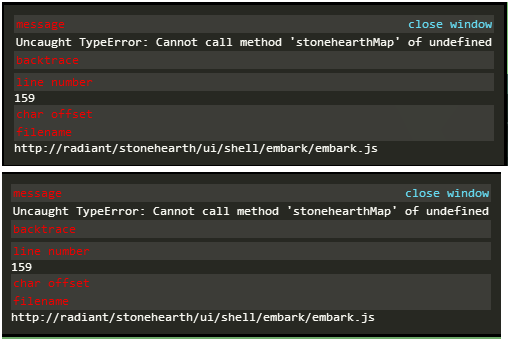 And whan i later started to build i got this error. and it repeated several times and when i had five of theese errors my workors stopt building my house.

The last bug have i had for a looooong time. bu now it happens to all my saves, (And YES, the saves are from the latest branch). it happens every time i try to load a saved game, the loader starts but only loads 20% then craches… and this message comes up:

there might be some known bugs related to that.

Yes, that message box has appeared in several reports.

@edron5, thanks very much for reporting

. If you won’t mind, the next time you could make separate threads for the bugs, so people can confirm them independently. This helps also when deciding if a bug is resolved or not, because bug reports that talk about several bugs can’t be closed if one of those bugs is not resolved yet.

IMHO, bug reports that report an only specific bug are more likely to have more attention and more quickly (because they’ll have a specific descriptive title), even though we’re a lot of people reading them.

I don’t want to discourage anyone, though. There are even bug listings out there, I’m not against them. But it makes more difficult to keep the forum tidy, because if a person posts 3 bugs in a thread and other person posts 5 bugs in another thread, and 2 of those bugs match in both threads, we have duplicate information that should be in the same thread to join up all the different details they may have (they could be cut and merged, but when this keeps happening a lot, it’s not worth bothering about doing it - unless one of the bugs is a blocker and has not been reported anywhere, I guess

This is only an opinion, I’m not scolding you, this is addressed to everyone in general. I was just expressing a personal wish

Aah yeayh, I´ll Think about that the next time i find a bugg!
I tought it was a good idé to put it in one repport, but you are totaly right… so next time I¨ll se to it that they will be devided!