Some notes, suggestions, and general ramblings of an on-again-off-again player

Hey guys I’m back! Again! What is this, like the third or fourth time I’ve up and vanished? Who even knows at this point.

Anyways, I’ve been playing the newest updates a lot lately, and I’ve decided to attempt to compile all of my thoughts in something resembling a logical manner. A few bugs, a few nit-picks, a few suggestions, all in no real particular order.

I’m probably going to end up adding a lot of things to this post, as I don’t exactly have a stretch of time long enough to get everything down at once, and I’m too scared that I might loose the draft or something. I’ve got a big 'ol list of tiny notes saved somewhere that I want to talk about here and elaborate on, so I’ll pull those out and try to write up a couple more paragraphs a day when I can.

Music Dead Time
I haven’t tested this with the Ascendency yet, but in a Tier 1 Rayyas’ Children city, I often experience long stretches of silence between music tracks. The silence is definitely a little… unnerving. I haven’t played long enough with a Tier 2 city to know for sure whether or not the problem is remedied, but I’m fairly certain it might be.

Starving Pets
Alright now if I’m wrong here, please pardon me, but food only spoils in open stockpiles, right? Thus, it is ideal to keep all of your food in containers, not to mention that it’s a much tidier storage method anyways. However, pets cannot eat food out of a container, which means that either A) you make a food stockpile and pray it actually gets filled up, also risking your food spoiling

or B) your town goes though a constant cycle of cute tiny animals starving to death.

Kind of a loose-loose really.

I drew up some really fast sketch ideas even! 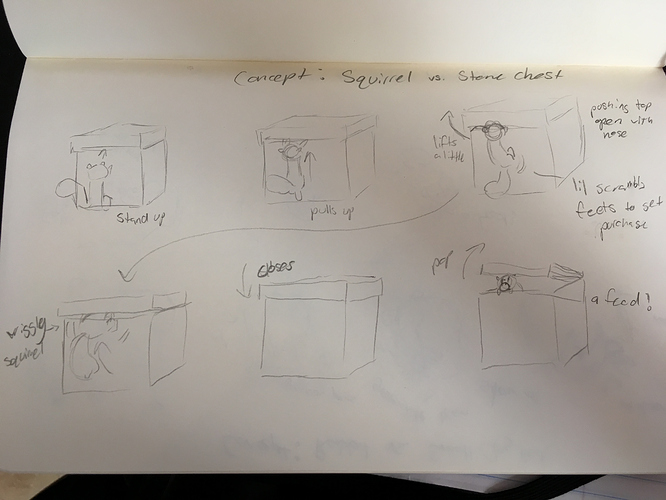 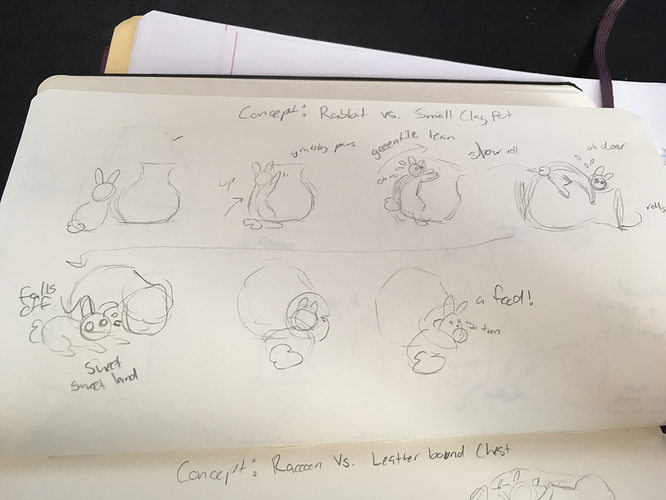 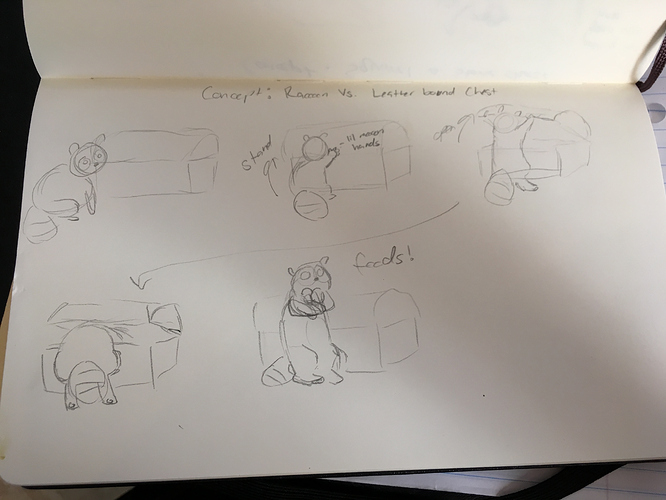 Personal Space???
Alright, so, this is going to sound way more negative than I’m at all intending it to, so I’ll open up with this: I really do think the personal space mechanic has the potential to be very interesting gameplay and immersion-wise. However comma, if not for the Desktop Tuesday video that come out on the feature, I would have literally no idea it was in the game. It is… how do I put this, very quietly implemented. I’ve been trying to mess around with it as much as I can and I just don’t understand the mechanics. I definitely feel like an explanation of the personal space mechanic, or maybe an approximation of how much space a hearthling needs, really needs to be worked into a tutorial or something.

Inns
Alright this one definitely ties into the thread on hiring mercs.

So here’s the idea, traders (and possibly mercenaries) need a place to sleep, right? Any self respecting trade city isn’t going to make visiting caravans sleep in tents on the ground, no no no, come in, you’ve traveled so far, come sleep in this nice cozy bed we’ve prepared for you, have something to eat, (give us a discount…)

So here’s the concept: build an Inn! Completely optional, there shouldn’t be a real drawback of not having one, especially in early game when you don’t even have time to build houses for your own people, but if you do build one, maybe you’ll get a little price deduction for your kind hospitality.

Basically I think this could be possible just by allowing beds to be assigned to “Visitors,” and you could probably call it done there. If you wanted to go one further, if the personal space mechanic ever advances to awareness of the beauty of a room, (fine furniture, decorative items, that sort of stuff) maybe have traders give the player a discount based on the quality of their accommodations.

Love those drawings of the squirrel!
Your idea with the inn is really cool. I would love if heartlings (NPC’s) comes to the town and visit, trade or maybe just as a tourist

Maybe these heartlings could even be the ones that decide that they want to stay and then gets under playercontrol when the requirements are fullfilled?
So things like the inn, or tourist attractions or marketplace could be a factor of what kind of heartlings would come by?

to link just go the the area of forums, on top is the url just copy and then paste it here

Rayya’s Children Tutorial
I’m sort of in the middle of teaching my boyfriend how to play this game, and he’s sort of unfamiliar with the sort of god-game-esque style of gaming, so I’ll definitely have to see what kind of insights I can get out of him. If I could suggest one thing, and excuse me if I’m incorrect here, but I’m fairly sure that the tutorial only activates if you are playing with the Ascendency. For some reason even I can’t explain, I’m just really not a big fan of them and always play with the Rayya’s Children, (maybe its the lack of tier 1 blueprints and my utter lack of building skill, or it could just be an aesthetic thing? who knows)

Anyway, I usually pick RC when I go to show the game to my boyfriend, and there’s no tutorial, so I have to explain everything on my own, yknow? Like, I know this is probably a personal error thing, given that Rayya’s Children is considered to be the more difficult group to play, but like, I love them so much. The bright sandy warm world. The music. It reminds me of my grandmother from New Mexico. I just really wish Rayya’s Children could be lowered down to entry level like the Ascendency is considered to be I suppose, or if not, some sort of a warning on starting a game with them that they are more difficult to play with.

And thanks! @micheal_handy76_mh I got it linked.

if I’m wrong here, please pardon me, but food only spoils in open stockpiles, right?

Wrong, sorry; I’ve had baskets of berries spoil while inside jars. I’m definitely with you on wanting a better way to feed the fluffy animals, though - at the moment I’m resorting to an outside stockpile they can access, but there has to be an improvement on just leaving food around and hoping they find it before the rot does.

Desserts!
What if the cook could make sweets? Like, nothing with any real nutritional value, and probably with a slightly high skill or material cost, just a little something to give a mood bonus. Hearthlings already go back for more food several times during a meal, maybe they could just check for desserts after eating, right?

I figure this could be more of a mid-late game thing, once your city is fully self-sustaining on food, but maybe it could be another way to “defeat” the goblin and orc raids. “Why fight? Have a cake! Cookies? Yeah we’ll give you the recipe! Wanna set up a trade caravan?”

Rayya’s Children Shepherd’s Crook
Is it in any way possible to make the shepherd’s crook a potter recipe for the rayya’s children? it takes… so long to get… so so very long…

Rayya’s Children Chili Peppers!
I remember posting something about this back when the rayya’s children first came out, but I thought I’d bring it up again while I’m on the topic of recipes and the RC. I know I’ve said many times how much the Rayya’s Children remind me of my grandmother and our New Mexican roots, what with the pueblo building style and all, and let me tell you, chili peppers? They everywhere. In the food AND in the decorations. First off, we put chili powder in like everything, it’s delicious, and secondly we use a lot of peppers just generally. Bell peppers are still not personally my favorite, too sweet for me, but we use a lot of them. Jalapenos? Amazing. Delicious. Chop it up, put it in a salsa. stuff it with cheese, fry it: perfection. Infuse it into some vodka, burns SO good. Spice is the spice of life man.

But also: decoration. They’re fake mind you, but my grandmother has pepper string lights hung up in her kitchen. chili salt and pepper shakers, paintings, placemats, you name it. Heck, she’s got a little standing cupboard and the knobs to open it are chili peppers. Jewelry? you know it! (Also turquoise, New Mexico is famous for its turquoise mines, but I know that the RC are definitely based off of many other places as well, so thats a little less important). But also, dried chili peppers could be a cool, and immersive, wall decoration.

@Relyss I’m not sure who to tag on this, but the shepherd’s crook does indeed come way too late in the game for Rayya’s Children. @sheepasaurusrex just reminded me how that was a bother when I played that faction last time. Would it be possible to give to some other crafter for them?

It’s been a whole year and I’m back again! With thoughts! Woo!

Build Mode Kerfuffles
I for one would really like to be able to build a ladder into a building design rather than having to add it in afterwards. Or possibly like, a leaning ladder with different color options? Just like, one or two tiles in width. Something a little less bulky than stairs for cramped spaces or lofts, if that makes any sense.

Also, the new crafter’s storage made me really wish for some wall shelves for purely decorative reasons.

Stuffed Bunny
It’s too cute to just be decorative man. I wanna see a hearthling cuddling it. The fact that hearthlings still can’t sleep with their stuffed animals is frankly a sin, and I refuse to stand for it.

All joking aside, it would be heart-meltingly adorable, and maybe it could even give a buff. Also, more stuffed animals would be beautiful. The day I can decorate my hearthling’s house with a teddy bear bigger than they are will be one of the greatest days of my life.

Prioritizing Harvesting
For the sake of early game herbalists and weavers, harvesting plants ASAP would be really really convenient.

The Combat Music Is Entirely Too Loud
I keep the music up because I love it so much, but dear lord, I jump nearly out of my skin nearly every time combat happens. Everytime. My blood pressure doesn’t particularly appreciate.

The Scream
I’m sorry, I just, the new face models for the hearthlings look so TERRIFYING when they’re selected. I didn’t get any screenshots, but like, the eyes man. I didn’t know something with no mouth could look so much like The Scream. Again with the blood pressure ya’ll, my lil heart can only take so much terror. It’s the eyes. The huge, white eyes. Does anyone have any screenshots? It’s midnight:30 and i got class in the morning, but if not I can screencap a couple tomorrow. 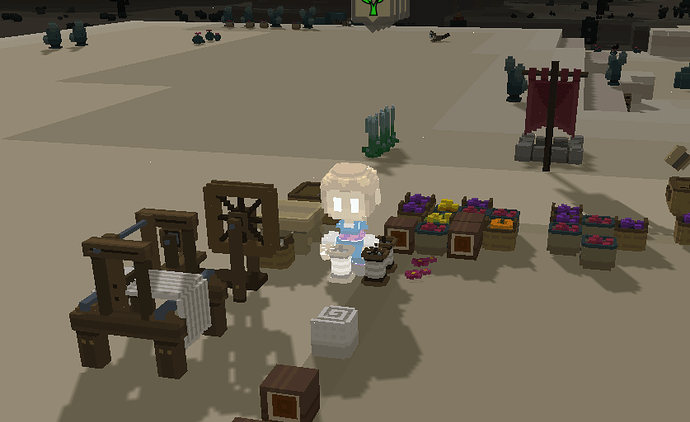 This is because you’re using low graphics mode. I feel your pain as I was once stuck with the “whitelighting” instead of the outlining that the advanced graphics allows for. I am so glad I could afford a new graphics card but I know that there are still people who are stuck with older cards.

I love working with all the available colors and it’s terribly hard to see what color I’m working with even in high graphics. White brings on another whole level of difficulty.