I think it would be a neat little feature if ~occasionally~ the undead spirits of our people would come out and haunt the village at night.

kind of like in the sims or in dwarf fortress. 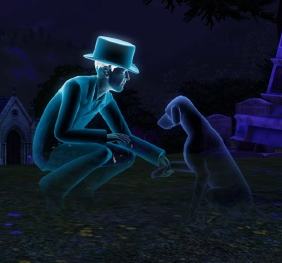 It would really add to the “feel” of the game if i do say so myself.

Also, you could make them !Fun!

I just think cartonny ghosts would be a great addition to the overall stonehearthian world.

Maybe if there’s no memorial for them they can get angry when they appear. Perhaps they visit their own grave first before they act nice or unkindly.

Seeing as how gravestones are generated automatically when villagers die, ghosts are unlikely to get angry about not having a gravestone. I suspect we might see ghost enemies in spooky locales, or other situations/locations where dead-raising magic is involved.

Maybe they could be angry ghosts if they die of starvation or lack of sleep?

I think i did a thread about this…

I think it would fit neatly in here:

What happens to people who die in battle? Also will villagers die of old age?

Seeing as how gravestones are generated automatically when villagers die, ghosts are unlikely to get angry about not having a gravestone.

think it would fit neatly in here

thanks for tracking that down… and while it would be a good excuse to resurrect that thread (pun somewhat intended), it’s so massive that perhaps a new dialogue on “afterlife options” is in order…

if the consensus feels otherwise, just let us know…

Hmmm a new thread would make it all a bit easier to get an overlook. Give me a few hours and i will find some of the afterlife discussions from it.

lol. I can see a family gathered around an old man laying in his bed. He smiles and drifts softly into death. Then he explodes painting the entire room and all the people in a pool of red.

Haha, ah man, that made me laugh, the thing is you’re just playing zoomed out, the doors shut on the house, and you just see a load of red explode from under the door and into the street - zooming into the house and it’s just plastered in red.

I had forgot how disturbing this thread is sometimes O_o

Crazy thought, I know but what if…

As we are going be unlocking Alternate Planes, no doubt…

Our slain citizens can be found again on another plane? Either to be returned to us, or as a hardened foe to ahmper our progress for letting them die!

They’ve already hinted at the possibility of resurrecting your fallen guys … and how this has the potential of leading to some sort of zombie apocalypse.

This mostly a suggestion…but It would be great if you can employ a wizard/necromancer, that can resurrect them?

Then you will have an unstoppable army that can take over of the 2 factions that you are against!

Probably bets to have the citizens bury them…

when villagers die their souls can be added to a soul tree for the town. Then that soul tree will give off bonuses based on how long it has been there or how many of your villagers souls are powering the tree.

Hmm i think this is it

Some of it are about zombies but isn’t that a part of the afterlife too?

I mainly like the concept of ghosts from a story point of view, whats better then 1 night “old man pantor rose from the grave and began floating around the cemetary, looking forlorn”, he warned us, but e didnt listen.

Unless of course he came out as a zombie due to a nearby necromancer and ate someone.

I too really like ghosts because of the stories connected to them, they are somewhat scary.
“The ghost haunts the town demanding a proper funeral, if just we knew where the body was”

But can be used in a lot of comical situations. “Once again Lord Burlyhands haunts the town searching for that burger he never got”

Also there is probably a lot of funeral/graveyard discussions that could be picked up here would that derail the thread too much and should we take it over to Dark topic instead? or would it be ok?

How about the Ghosts appear only on the anniversary of their death and fly around scaring the villagers. Unless you have a properly setup cemetery during that anniversary they just float around within the graveyard “zone”… and of course during Halloween they raise Zombies from the ground!