Summary: I was going to make a suggestion that you should be able to cancel your placement of a carpenter output stockpile, because you may have started to drag from the wrong corner. This happened to me in the game I made a video of, and my OCD was suffering (see attachment). However, I realized I hadn’t actually tried to cancel it mid-placement, and I thought the ESC key might do the trick (before letting go of the mouse button). I tried it, and then realized I had to make a bug report and not a suggestion thread, because doing this gets the dialog and the message below it stuck (see screenshot attached). Not only do I think that should not happen, I think you should be able to cancel the placement of the stockpile, and perhaps undo the placement of the workbench, at any time during the process by pressing Escape or similar. 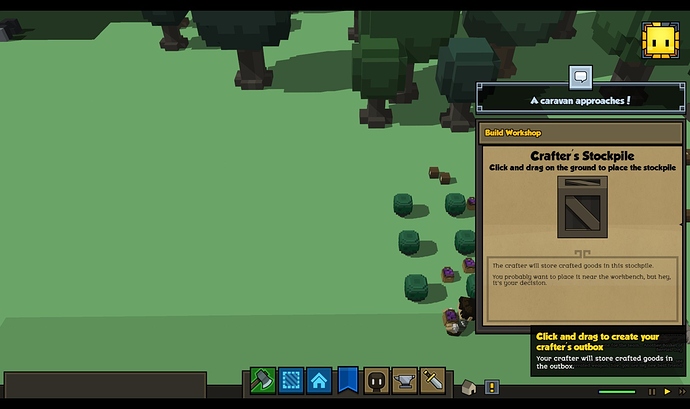 Versions and mods: No mods, latest release version in Steam at the time of writing, version 0.1.0 (release 110) according to the title screen.

what about the bug where the carpenters storage box shrinks after you load a save ?

[quote=“Warblade, post:2, topic:6634, full:true”]
what about the bug where the carpenters storage box shrinks after you load a save ?
[/quote]new topic ill get that for you

Ah I intended to post about this one. I wish there was a “Close all pop-up” button added for these alpha releases. Because these kinds of bugs with popup menu’s are the cause of half of my re-loads of my game.

This bug is not currently valid. Closing.