[MOD] Why So Blue? - Discontinued

Here’s a screen shot of the error: 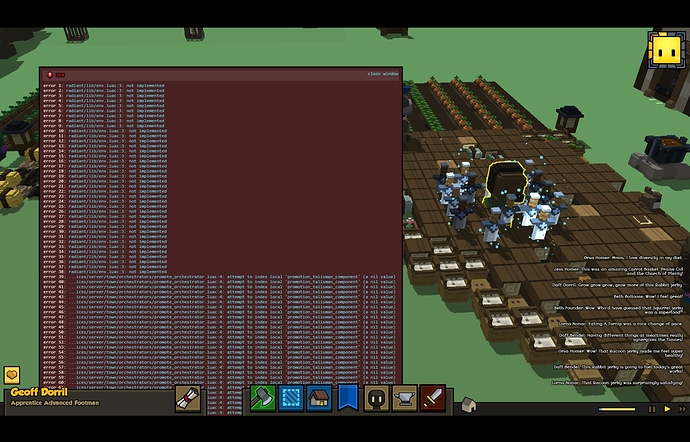 I’ve been meaning to merge to the two classes for some time, as the adv footman was a workaround for something I was struggling with at the time.

The short sword and shield are the same item value, and so it’s entirely random. I’ve tested it, and they will pick up the shield first sometimes. I’ll increase the item value of the shield so that they pick it up in the first instance. Unless you are saying the standard footman, with the wooden sword, is ignoring the shield completely? Is it the iron or the wooden shield?

I haven’t had time to test the footman demotion, but I will look into it as soon as I have a chance.

Thanks for the screenshot. I should be able to work out the issue from that.

When you get the random event of a new villager and that villager is a Footman they will pick up the shield and armor while hanging onto the wooden sword most of the time, the problem of the swords mostly happen when you promote a villager to Footman, wooden sword in primary hand and iron sword in off hand is what I get almost all of the time.

This multi-sword happening is when you have any Footman with an iron sword and change their profession so they have to DROP the iron sword, it will do a lot of the time what you see in the image, spawn a bunch of iron swords and spam the error message.

Thank’s for the info! I’ll look in to this.

In response to the above, I am using the 8a version (Wsbmod8a.zip).

The game does run when no mod (or when the nihonjin mod) is installed.

When I try Froggy’s mod, I deleted the nihonjin mod, so I only have Frogg’ys mod (no other mods) and the end result look like this:

When I run Froggy’s mod, after the blue loading bar in the loading screen reached the end, suddenly everything freezes (and the happy music stops), and next screen is this: 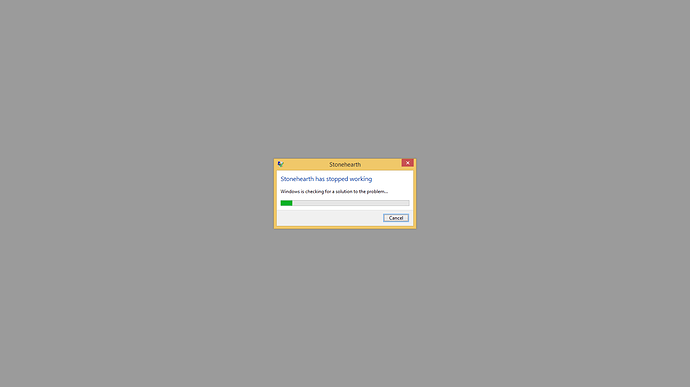 No error message prior to crashing to desktop.

I am not sure what the minimal tested version is, but I have just downloaded the steam game so I assume it’s the latest version.

I am not sure what the minimal tested version is, but I have just downloaded the steam game so I assume it’s the latest version.

You aren’t playing the latest version then.

Hurrraaah!! That’s where the problem is! After I updated the steam game (didnt even realize I could do that) the mod now works! Now I feel a bit silly…hehe. So the problem all along was that Froggy’s mod is too advanced for my game.

But thank you guys so much for your help!
Unatan2 for the trouble shooting and showing me how to install on steam, Cladox for asking the vital question that exposed the problem and Froggy for fixing it. You guys are awesome!!

i have been testing this mod on version 1687 and it’s impossible to me to build a blue or red roof. Workers build the walls and floor but not the roof, Is anybody having the same problem?
Thanks ;)!

you need stone for red and blue roofs.

I noticed while going through the files for your iron_plate had an extra u in the tag which was stopping it from using the stockpile properly.

if you change the tag to “tags” : “armor heavy_armor” it will sort on the heavy armor option in the stockpile.

Wow, many thanks for that. Excellent find. I’ll fix it and upload as soon as I can.

I’ll use American English from now on as well. Might save some future headaches

Hey Froggy, I think this may technically be a bug (although a pleasant one!), and I am not sure whether it is related to your mod at all, but during my play through with your mod, this happened:

A group of zombies approached me “bearing a gift”, nicely placed it down in the town center, and neither them nor my villagers attempted to attack each other (well… until I intervened

). For a brief period of time men (and women) and zombies were living peacefully together.

And this happened right after I had a major fight with a large zombie horde and wiped them out completely:

In an ironic way, it is almost as if the zombies lost the war and decided to send some messengers with gift begging for truce…

…wait a minute… after experiencing your modding prowess, I am beginning to wonder if this was intended to be a part of your mod (like a secret easter egg thing)… hmmmmm…

I wish I could take credit for it, but sadly, I cannot… (at least knowingly)

Oddly enough I find the moment you try to block pathways to your village the AI changes, be it walls or fences, the guards start idling different (less guarding and more acting like workers) and the zombies become weird acting, and if you try to completely wall or fences off your village the game really gets upset and crashes.

After seeing all of the awesome content created on yesterdays livestream that basically makes my mod extinct, coupled with my personal circumstances of being deployed overseas, I have decided to discontinue this mod.

Thank you all for the feedback and support over the last 2 and half months.

This is a bummer, but a understandable choice of action.
Good luck overseas! May you soon join us again!

Hope everything goes well for you overseas. Looking forward to your next mod! …however long that may be from now

Oh I don’t know, some of the stuff is similar to @Tom’s stuff in the stream sure, but Radiant are still playing catch-up in other areas

coupled with my personal circumstances of being deployed overseas

Hope everything is still okay in this regard