mining is a nightmare. they randomly decide to dig then the stop and get stuck and they never collect the ore even if I have them doing nothing else

hi there @emmo … welcome aboard!

I wonder if you could elaborate a bit… do you have anything else going on (crafting, building, etc.)?

just this happen just after a new game has started, or does it take time to build up to this lag in worker activity?

any additional details you can think of will be helpful…

It happens from the beginning. They will dig the but they won’t collect the ore. it sits there forever even though I try to make things that need it. I will stop all other projects except farming and the will idle around instead of going to collect the ore.

dumb question, but it must be asked…

you have an available stockpile setup, and capable of receiving the ores (that option was unselected, etc.), correct?

I can confirm the random stops in mining that Emmo is talking about. But my workers collect the ore just fine : )

Here is a mining area of an 2x4x5 corridor which is stopped: 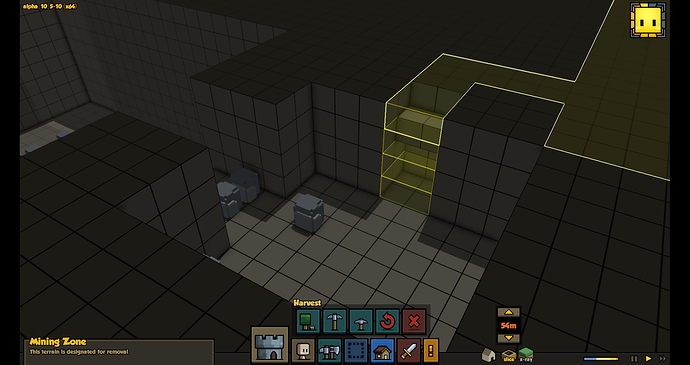 I am not sure if the hearthlings just assume that the yellow parts are not mined, but after I removed the mining area, and seperately told my hearthlings to mine the cubes, it worked. 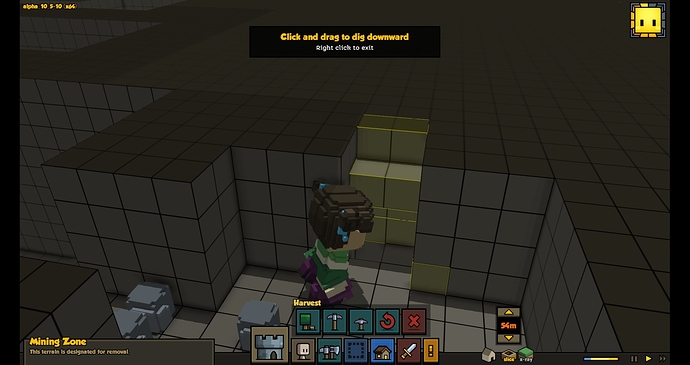 Maybe it would help if mining plan (the yellow area) is removed right after that area of the plan is finished - cube by cube.

Yeah I tried to dig a 4x1x1 area earlier and it took 4 hearthlings ten minutes to do.

Yes to all. I just quit and restarted the game. This one they seem to be doing better. I just think the mining is good but just needs to be cleaned up. Some areas you can do the big blocks and it leaves a single layer between them you have to do individually. A pain. And if they get stuck have them auto build a ladder. I hate having to babysit if they get stuck.

I have also noticed this problem. This only occurs for me when:

An easy way to trigger this: drag four 4x4 areas directly above each other (so that it should work the same way as the block mining (‘m’ hotkey)). Since the Hearthlings can only reach the front row of each one, they only mine 1/4 of the area, then will slowly (over a long time) eventually get to the rest of the mining. If instead, you do 16 1x4 areas, it works just fine.