Items not appearing in inventory (R864)

Summary:
i started a new raya’s children save on the new experimental build (R864)
Steps to reproduce:

Expected Results:
i can sell the plates for some money so i can start trading for stuff thats harder to come by etc.
Actual Results:
plates are in my stockpile chilling, 1 of higher quality DOES appear, but the normal quality ones do not. cannot sell them
Notes:

There’s no future in plates. Teapots are where it’s at

however this behaves inconsistantly, i got a couple of storages displaying 30 occupied slots, but i can only see 4-5 in contents (indicated there’s 25 items in there i cannot see.)

I’m currently getting the same bug!
I can’t see all of my items either, sometimes they appear and then disappear again in the ‘place an item’ tab

This bug is driving me crazy, with the way I play this makes things really difficult. It doesn’t make sense for it to be for building, if it were it would affect the building inventory OR it would list the highest quality first or just no quality at all and put the highest quality down by default.

This will be fixed in the next release.

Just a note, it is not only normal items hiding behind better ones. I had plain stone fence pieces hidden and couldn’t place them at all. I had already placed the nicer ones. I could only see the normal ones through the town’s inventory list, which showed the number of placed ones and then the ones supposedly in containers. I could also tell I had a bunch I couldn’t see because the mason wouldn’t make more of the maintained queued pieces. He knew that they were there!

I am noticing with the last update I still have lots of items in my inventory that are not showing up in the market place, sometimes these are things like single windows which I would like to sell other times they’re furniture or workshops. I don’t think this bug is entirely fixed.

EDIT: Here’s a screeny of it happening on current release…I have quite a LOT of discrepancies, I have roughly a dozen objects here with the wrong counts. From my checking it looks like the store is showing more than my placeable menu is. 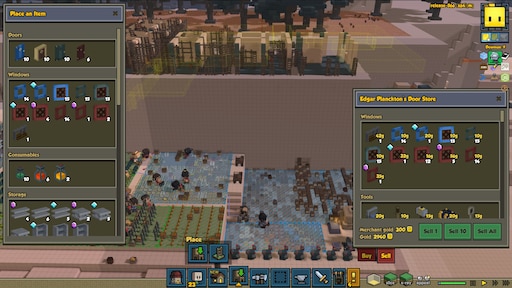 This bug was a UI issue, and the same UI is used for both the trader and the placement window. However, they take their data from different sources. Your screenshot is probably a different bug. Can you upload a save?

I think this was the goblins destroying things bug possibly. I’m not sure I can upload a save but I will next time it happens/I notice it.

Summary:
Just started up a new game on the latest Beta, there seem to be some issues with placement of items, not being registred or something. The items are in storage (see screenshots) but are not available to be placed.
Steps to reproduce:

Version Number and Mods in use:

Sounds like this: Items not appearing in inventory (R864)

Edit: And @max99x says it’s fixed for next release, so hopefully it’s the same bug.