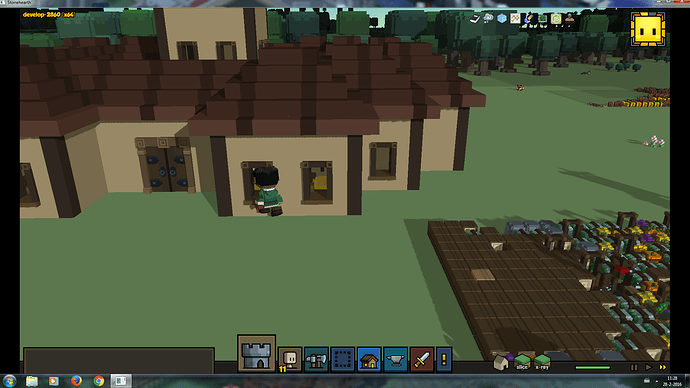 The villagers think that this wide window is a door to be used for transporting good. Those badass villagers. Not sure if this is a bug in alpha 15 or just something fun to discover

Still, it would be nice if they’d prioritize doors over windows.

I know this sort of behavior used to cause other bugs - there are pictures somewhere on the Discourse of Hearthlings stuck sitting in tall windows. That, itself, was supposed to have been fixed, I believe.

So they’re just traveling through, not stopping in, right, @Doc_Brano?

Not a bug, but it is annoying, yes. You can either raise the window so they can’t climb it to go through, or put an object blocking their path, like those flower pots, which would look good.

well there is a bed behind the window, but that is not solving it, will try a flower pot or maby those hanging flower things from the window

@coasterspaul yes they travel through it, with or without holding items. They walk this route skipping the double door close by it. Multiple villagers do it

That’s interesting. I thought doors were specially declared to let hearthlings through, but it seems like it’s really just about the holes the hearthlings leave to put the doors and windows in, so when the window is low and high enough, they can slip through the 2x3 hole. I wonder if hearthlings can go through all decorations.