Summary:
Sometimes the ground after goblin camps is not correctly repaired: the ground that was under the dirt pile itself is not replaced. I’ve managed to see this bug twice in a single playthrough.

Actual Results:
Building planner does not replace ground under the dirt pile itself.

Notes:
I suspect interrupting workers with “Town alert”, scaring them with enemy monsters or reassigning work from one worker to another (help through high compassion) may contribute - 2nd time I’ve recalled a worker through Town Alert. I include this save in the report. 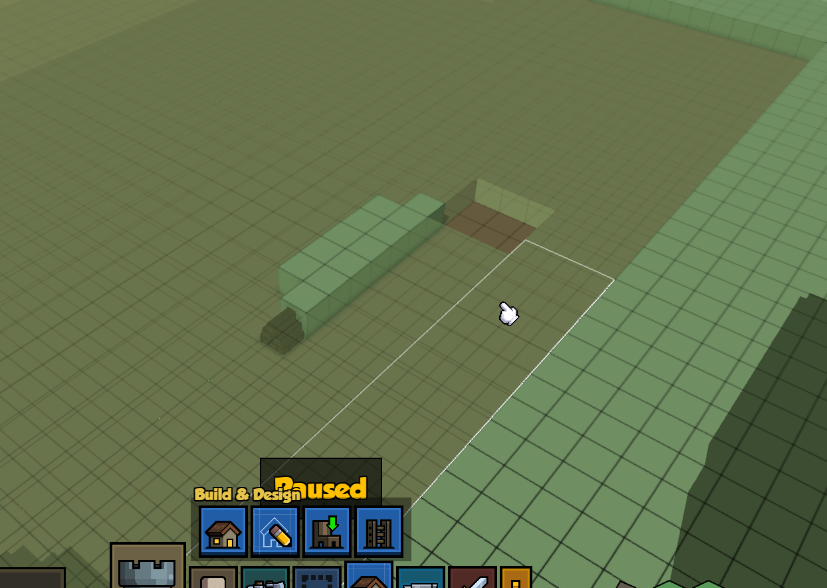 3 Likes
Not filling in the grass after goblincamp
Engine error when finishing replacing ground
Dirt not filling in compleatly
Replacing Grassland incorrectly cleared by Hearthlings
Dirt Fill Doesn't Fill Where the Dirt Pile Was
Golden January 17, 2017, 11:06am #2

I’ve seen this in every playthrough where I got the dirt pile in the camp. And I checked the latest and there was no Town Alert. The different workers did switch off for sleeping or meals or whatever. However, that shouldn’t cause the empty 2x2 square of dirt.

There was something in that hole? Maybe the building is avoiding the object and not filling everything with the floor…

Which mods were you using, @MelOzone ?
I’m getting some funny bugs when I load that savefile and I want to make sure that they’re not caused by the base game.

epic solution to the camps digging up the dirt.

I just noticed one small issue:
the 3X3 area that the pile of dirt was sitting in did not get filled in. everywere else was filled back in except a 3x3 hole exactly were the dirt pile was sitting

@Fralee did you notice if your camps were adjacent to a cliff or to water?
I could only reproduce it in those cases; when the camp was in the middle of the plains they did fill everything.
Did you see any Lua error or ladder/scaffolding when they were filling the camp?

In my experience, I know when that one spot is missing, the camp has been next to a cliff.

A couple of times I’ve ended up with a “pile of dirt” item in my storage that I had to sell to get rid of. It wouldn’t let me place it in the world and fill in the blank spot.

Same problem here. Note that the camp was near the water.

Video of the process here.

Summary:
After defeating a goblin camp and ordering the dirt to be filled back in, the dirt is queued for every spot except for the 3x3 area that the dirt pile was sitting. This happens every time in all of my save files. After the dirt is filled in every spot except where the dirt pile was, then the extra dirt is left next to the camp and sometimes I get an engine error. The extra dirt doesn’t have any options when selected, and I can’t find and commands in the ctrl+c window that can queue the rest of it.
Steps to reproduce:

Expected Results:
The pit where the camp was is filled in completely and there is no dirt left over.
Actual Results:
Where the dirt pile was is not filled and the extra dirt is left nearby.
Notes:

Version Number and Mods in use:
Alpha 21 No mods in use. (No mods have ever been used and then uninstalled.)
System Information:

@Albert I can repro this. I know this worked in the past, possible regression?

Edit: Thanks for the merge @Relyss. Just read the topic - indeed the camp was next to a cliff (just to the right of the screenshot).

Yes, seems that this isn’t fixed yet (I merged with the previous report).
Latest info was:
"…the terrain_restoration_component is working correctly.
It looks like the build service doesn’t want to build that particular chunk of floor. Not sure why yet.
It happens near cliffs and water because the multiple terrain colors there cause the region to be fragmented into small pieces…"

Chris’ rework of the building system should implicitly fix this bug.

Summary:
i have noticed that the area after a goblincamp that can be filled in with the claypile, do not get completely filled every time. This results in a few blocks of grass missing and a tiny claypile on the surface.

Expected Results:
no hole left in the ground.
Actual Results:
a few blocks missing and a small claypile on the ground.
Notes:
It seems that it is not every time this happens.
Attachments:

not a bug, you need to select the pile of wood near your hole in jour image.
and re click on the button…

It should correctly fill in the hole though, the button shouldn’t have to be clicked again.

I appreciate your helpful personality @artifus, but i posted this as a bug, because i have experienced it a couple of times and you cant repress the pile