So, uh, I’ve heard of and seen things like this before… but it’s usually vice versa… 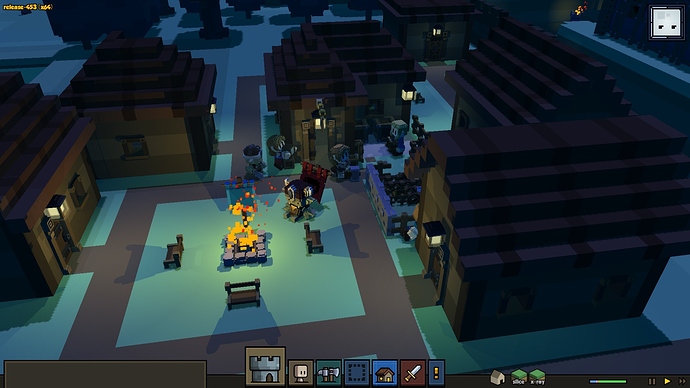 Now, I know my town is wonderful and anyone would want to live in it, but I’m pretty sure he isn’t supposed to be there. Not to mention the fact that he brought a couple friends and no one seems to care.

On another note, there was a goblin camp that spawned south of my town several in-game days ago and I have not received one raid. I tried sending footman over there and once they got to the fire they just stood around until I told them to get back to town.

Honestly, I think it’s kind of cool how they just strolled right into my town and plopped a squat next to my campfire with no harsh feelings.

I wonder if this has to do with the fact that I actually paid them tribute? No new demands have popped up.

The only thing I am worried about is the possibility of a… epiphany, so to say, if I reload or when there is a new tick in the story. I have a feeling that if something happens, like a reload or when/if they ask for more tribute, and they’re in the middle of my town, that there’s going to be… carnage

Yes, It happens when you are at peace with goblins.

Interesting. Given their demeanor, I would’ve expected the goblins to still keep their distance from you.

Either way, he eventually moved over to one of the two little thief camps to the south before demanding more tribute. I rejected, and it was about two or so days of constant thieves/warriors assaulting my town. Pretty much every goblin camp was devoid of goblins, and the chieftain decided to waltz on over to the main camp again.

He was subsequently slaughtered by my three guards without even fighting back.

@MyCoal417, the goblins are friendly as long as you’re friendly to them

They don’t start as enemies, I think. They give you the opportunity to appease their demands.

Aw, look at that screenshot, he’s so cute

I had never actually appeased the goblins before this. Thanks for sorting out the confusion! And yes, I did find that situation rather cute. He was just sitting happily in the middle of my town. I think someone even came over and sat in his lap. I got a better screenshot that I’m using as my player card and I think it’s awesome.