Eek! Candledark Is Upon Us Again! 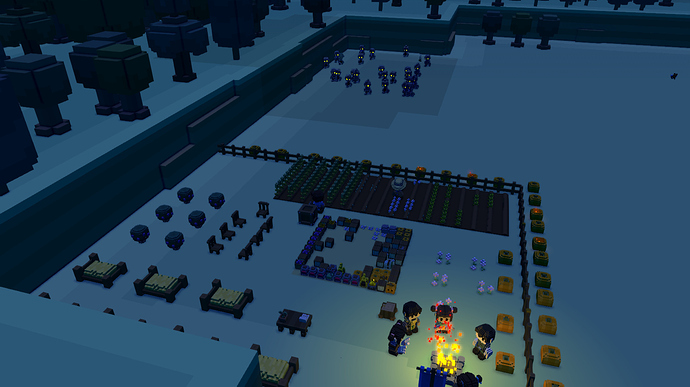 That chill in the air is more than just cooler weather. As the season turns and leaves fall (or were they pushed?), the night brings a feeling that perhaps something isn’t quite right. A prickling on the back of your neck… a noise behind that berry bush… a shadow cast where shadows should not be. It must be the season of Candledark.

This third edition of Candledark was created, as was last year’s, by erstwhile community modder Froggy who once again has gone above and beyond in serving up a chilling — but awesomely fun — holiday experience for Stonehearth.

The Return of the Return of Candledark begins familiarly: your settlement receives a visit from the mysterious Elbezar Grimrock, who warns you of ominous happenings and cautions you to be prepared. He is definitely odd, but seemingly trustworthy. Perhaps you should heed his advice. When you see the dialogue below, be prepared to make a choice. 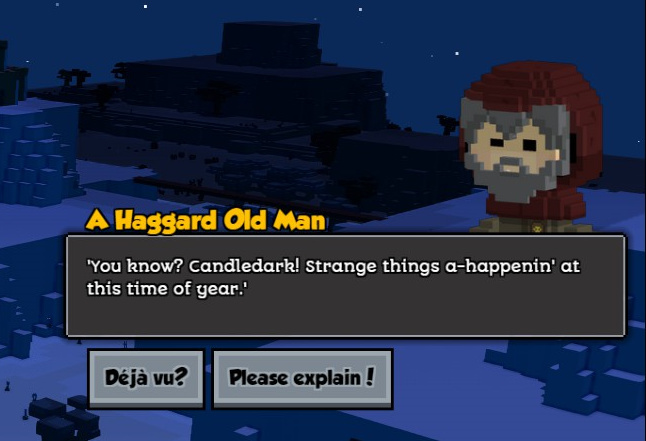 If you ask him to “Please explain!” you’ll take the path of last year’s Candledark (something new players might well want to pursue). If you have a sense of “Déjà vu?” then you’re likely someone who has played through Candledark II (and lived!) — and now it’s time to take in this year’s horrors fun. In either scenario, you’ll find hordes of undead… some familiar, some new… roaming the world, seeking out unsuspecting hearthlings. What can you do to survive?

“This year’s Candledark is an evolution of the tried and tested tower defence modes of Candledark I and II. I felt it was really important to stick to this style of game play, as for me at least that’s what Candledark is! Can you survive a seemingly never ending torrent of the undead? Candledark III brings Candledark firmly into 2016 using a lot of the recently added Stonehearth tech that the team have been working on throughout the last year; but CD3 is not just a compatibility fix. Candledark III brings with it a host of new recipes for your Hearthlings to enjoy, from town decorations to Candledark costumes and stylish hats, as well as all of the old favourites from the last two years. Those players new to Candledark can still enjoy last years campaign, while those returning veterans can try against a new, lethal foe – so there’s a little bit for everyone. (Those new foes? Just don’t try and use the pumpkin wards against them!)” 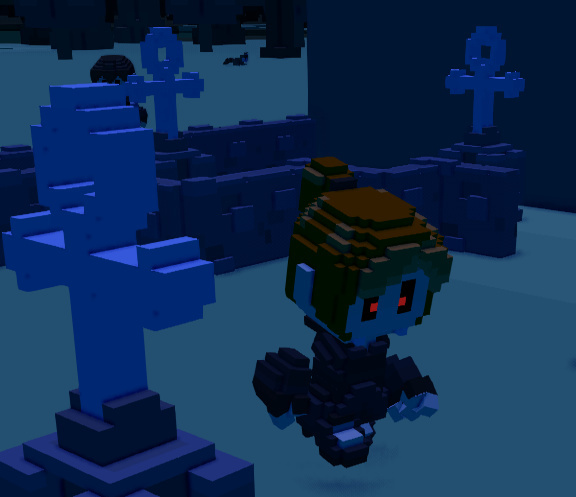 Hmm. This is unfamiliar. I hope it’s not dangerous.

To enjoy The Return of The Return of Candledark fully, you’ll need to be playing Alpha 19, which is currently out on our unstable branch, and coming to our stable branch later this week. (How about that for timing?) You don’t need to start a new game to experience Candledark III — it’s possible to load up an older save if you desire. Candledark is playable with either the Ascendancy or Rayya’s Children.

Remember, if you want to reload saved Candledark games, you must have the mod active (the game won’t start otherwise). Once you’re done playing Candledark, don’t forget to uncheck the mod using Alpha 19’s new mod management feature (you can always go back and live… or die… through it again).

Here’s how to play:

Enjoy The Return of the Return of Candledark. And once again, huge thanks to Froggy for his incredible creation!

My question is what happens when I turn off Candledark and resume my game? Does it bug out, or do I have to start a new save? Would just the Candledark stuff be deleted out when I continued my game without it?

when I turn off Candledark and resume my game?

Yes, you would run into issues. Make sure to make a new save as you are playing Candledark, and you can resume your original when done.

Just got an entire village killed…

5 skeletons appeared and they were ultra strong, killed my newbie footman with 3 hits!

are their any guides? anyone?

are their any guides?

What do you mean by guides?

What do you mean by guides?

I’m not aware of anything written…perhaps @Froggy would care to share some tips. I had only just joined the forums when Candledark II was released, so I never played it before

Best advise I can offer is:

Against the zombies, your priority should be a Carpenter and Herbalist,

Against the vampires, your priority should be a level 2 Carpenter, Herbalist and Mason.

I’d recommend also starting with as much cash as you can, because the wards are the only thing that will keep you alive. So buy them when you can!

Finally, it is possible to complete… but it’s tough! Fences and funnelling are your friend, and I would recommend focusing on the task at hand, and continue your peaceful village once Candledark Eve has passed.

is there a difference wether you play peacefull, normal or hard? Or is it just one type for all? I’m asking cause i don’t really play hard mode so tough enemy’s would be problematic for me

Candledark shouldn’t be affected by the mode. Candledark enemies will appear in all modes - and should be equally difficult.

so I never played it before

Looking forward to giving this a try later today…sounds like a murderously good time! Thanks @Froggy!

Wow! Made it through! Thanks @Froggy and @Jomaxro!

I’ll make a mirror directory of this (or the least buggy/humble) version of Stonehearth so I can play throughout the year without worrying about losing save compatibility.

Wait, so by a tower defense you really mean that? As in we need to place our “towers” to beat the enemies? That’s why my soldier would never be able to win a fight with them?

I never played any version, I joined just after the last release. Just jumping into this and thought it were all just decorations.

So I have to literally fence my village with pumpkins?

Edit: Yep, that’s it. I just learned this now looking into the code… The pumpkins damage whoever gets near them. It would be nice if the old man visiting the town gave this info. Else I would never be able to figure out.

“You best start building your wards, else there’ll be trouble!”

Hello! In fact, I have a question! Candle dark actually mean - just candle dark ?? Or what is the special meaning? @Froggy @Wiese2007

You’d have to ask Stephanie!