At 1:06:00, @malley talks about the problem with carrying wounded pets of different scales. If you have pets that are smaller than what the animation assumes, then they will appear to float.
Could it work if a hearthling rolled their pet onto a cloth, and if they thencarried the cloth, with their pet laying in it. Then, where previously the pet would be afloat, it would now be laying on a cloth, so it doesn’t look weird if the hands aren’t positioned under it.

This is essentially the wheelbarrow thing I mentioned - animal placed on ‘thing’ that doesn’t care about scale, then hearthling moves the ‘thing’ instead of the animal. The idea of a cloth may not work well just in that the hearthling still has to carry it - so for something like a wolf that is much larger than a hearthling, it would still be problematic. We could do something where the hearthling “wraps up” the animal in a cloth so only their head sticks out of a cube of cloth… but when you get to mammoths you still have a problem. But then, a mammoth wouldn’t fit on a wheelbarrow either ; ). Heh, Its a bit of a pickle, thank you for you suggestion!

Do hearthlights still carry injured hearthlighs?
I don’t think a wolf is much bigger.

They do, but only if they have been knocked out. A wolf is quite a bit larger than a hearthling - though it often doesn’t look it because a wolf is low to the ground. Its like a human carrying a large dog - I’m not saying you can’t do it, but you can’t deny its awkward ; ). At the very least, its drastically different than carrying a person. (Plus dogs don’t often liked to be carried and will wiggle a lot, its very troublesome ; ).) 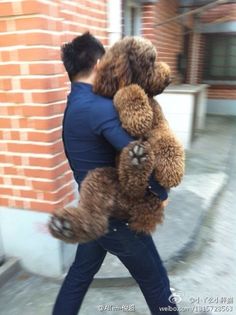 I’m not sure about that. I have a dog, and while it’s much smaller than that, she has no problem being carried around, upside down!

I doubt injured wolf will wiggle a lot.

Btw hearthlings carrying other hearthlings raise the same doubt in me. Carrying something roughly your own weight in your arms is… kinda heavy.
I understand it’s probably more convenient in terms of animation, but carrying on one’s shoulder(s) or on the back sounds more appropriate and… realistic.

That may be true - but the wolf carry is (put simply) a different animation. Animations take a few days to make (and animations involving two rigs working together take longer), and we don’t want to get stuck spending lots of time animating things we don’t have to - though in the end we may end up doing so. The goal is to think through all of the problems (not just a single one) and to find a universal solution if possible. So with that in mind, the question is not “Can a hearthling carry a wolf?”, instead the question is “How can a hearthling carry a hearthling, monster, and every animal type with the least amount of animation/engineering work?” Though in the end we may simply end up making lots of unique animations, we’re just trying to avoid that solution from the get go - as it is the most expensive.

Couldnt you just make seperate animations for small,medium, and large pets? something that would work with most animals of that respective size?

I agree with @AdriannaVentara here. Make 3 separate animations that work with everything.
Something like a cloth for all small pets, a wheelbarrow/bare hands for everything from small to hearthling sized, and two hearthlings with a brancard (or using a cloth as a makeshift brancard) for everything bigger, like wolves and mammoths.

I say that knowing that last animation is expensive to make, but I also don’t believe carrying a mammoth on one’s own is a realistic undertaking. And then there is also everythhing people could mod in, so I think it would be worth it.

Couldnt you just make seperate animations for small,medium, and large pets? something that would work with most animals of that respective size?

That may well be what we do in the end, but that doesn’t solve the issue of the same rig being used at different scales (rabbit rig); at some point the creatures would pop in scale. And as @nikosthefan points out, that wouldn’t solve the mammoth - realistically a single hearthling would have quite a bit of trouble carrying a mammoth, though I think I would call this a separate problem (separate problem, separate solution).

I would like to point out that even if we figured out a way to play animations to rescue a knocked out pet, pets can’t actually be knocked out at this point. There is a lot of engineering work yet to go into pets so that they can be knocked out : ). Even just on the art side:
Does an Herbalist tend to a rescued animal as they do with a hearthling? Can we re-use animations there?
Can animals be placed on a bed - would they fit under the covers, or sit on top of them?
Is that new bed tech?
Should we just make a bed specifically for animals?
How do we deal with different scales of animals here (either scaled or actually larger/smaller)?
Where would the Herbalist stand to be able reach each animal appropriately, or would each animal be in a slightly different position? Do we even care that the tending hearthling is standing in a unique position?
Do animals even have animations for sleeping? Currently only the rabbit rig does : /.

So it will definitely be a while before this gets into the game - if it does at all, we currently aren’t working on this, nor is it currently planned to be worked on. I just mentioned it as something we were wanting to do but ran into some strange problems before we even began. I’m sorry if I made the issue sound smaller than it was, or if I implied that we were currently working on it : /.

I didn’t ask about carrying pets for rescue reasons, because when they die they go poof and the hearthling receives a debuff. I figured since the devs put the debuff in, the pet dying mechanic was already resolved. They’re smaller so less likely to survive being mauled by a wolf or shot by a kobold arrow. I realize this may be an issue in the future for an Animal Trainer and their pets.

I asked because when a new hearthling joins your town, and they have the pet trait, the pet doesn’t follow them into town. Carrying the pet was a way to get it into your town when the hearthling moves in for the initial checkin. It wasn’t intended to be used for larger animals only pets. This could also be solved via a leash mechanic kinda like the shepherd’s flute. Wasn’t sure if the purpose for the question was clear.

Hearthlings have big heads and very small shoulders there’s not much real estate for holding anything. Small pets could potentially climb on top of the hearthlings head, but upon further consideration that could be sloppy and troublesome with certain hairstyles. Plus probably a nightmare to animate lol.

I’ve just been getting rid of pets as soon as I see one running around. The lengthy debuff is annoying, especially since I can do nothing to protect the pets.

When I get a new hearthling that has the companion trait, I dismiss the pet to prevent any other problems. That removes the trait.

I asked because when a new hearthling joins your town, and they have the pet trait, the pet doesn’t follow them into town.

I have not tested this yet, but i have been wondering if you could lure the pets into town with strategic placed stockpiles of food? It is defently not the solution for the problem, but maybe just a workaround for now?

Or, more realistically, the “fireman’s carry” – it’s used to carry fully-grown humans, and works equally well on large mammals (e.g. dogs, wolves, and other animals which weigh up to roughly 100lbs.) It looks like this:

The idea of this carry position is to leave an arm free (for navigating difficult rescues), so the hearthling can still carry a tool or weapon. A smaller animal (e.g. raccoon) could simply sit on the rescuer’s shoulder, while larger animals can fit into this position easily. Mammoths still pose a problem of sheer size, but even they can fold around in this circular manner… or perhaps the really large creatures could have a more traditional piggyback ride?

The difficulty of using this position is that the models may not be rigged to bend this way, but anything with reasonably long legs and/or arms could be made to “fake it” by clipping through the hearthlings’ shoulders a little bit.

Well creating a bread crumb trail could kinda work I guess. It would get tedious if ya happened to get a lot of pet lovers though and potentially dangerous depending on the spawn point and your progress. Plus you’d have to make sure your mini stockpiles had both types of food cause sometimes ya get a carnivorous squirrel that refuses to eat berries.

It would be a tedious mini-management process for no more reward than your hearthling’s morale wouldn’t get tanked by pet death plus ya get another mouth to feed. Well…you’d have another cute critter runnin’ around town so there’s that too lol.

The problem here is proportion. Look at a hearthling, they have teeny tiny shoulders and big heads wider than those shoulders. You can’t use a human example because we’re proportionately different. Imagine trying to get a bobble head to carry something on it’s shoulder. There’s not enough space for them to carry something on their shoulders without it looking like they’re pullin’ a Jean Grey and levitating something next to their head in the air or causing a horrific amount of clipping that would quite frankly be gross negligence on the devs part for allowing.

I asked because when a new hearthling joins your town, and they have the pet trait, the pet doesn’t follow them into town.

Ah, good point, I’m sorry I missed that and got stuck on a separate problem : ). Let me ping @Brackhar and get his opinion on this - I don’t think it was intended to be so difficult an issue.

No worries, this conversation may have given some food for thought for a future issue that may arise . I just chimed in because I was afraid so much effort put into a possible tangent may come to naught. Wanted to save everyone some time if that ended up being the case.

Oh, good point. We have a task to have pets follow their owners, but I’ll prioritize this more as a result.