I searched for a defense topic, but only found it mentioned in broad topics - which lose focus quickly. But please merge this if there is an existing topic. That said, I am a turtle player. I love walling up and smashing hordes of foes upon my gates. Focusing on wealth/economy, I amass and train my end-game army or get all diplomatic and ‘love not war’…ish?

I think all play styles benefit from good defense. I’d love to see moats, spike pits, towers, archer posts/crenellations and traps. Maybe not prefab’d, but the ability to make them functional. I want use the Geomancer to alter the landscape - forcing enemies to route directly into my traps.

So far it seems that most of this will be possible. I have already created a goblin proof town, where I only need one footman. Having gates - or doors that goblins can’t pass right through

- would make things much nicer when my internal wood supply runs dry. Trade would help there too, but they would have to have a way in that was monster free.

How about you guys? All the team needs to make defense great, is a strong foundation of the right tools and the players can do the rest. I would think more suggestions would help them ensure the tools remain simple to use but capable of building all we want and need. Plus, I just wanna hear what you guys think!

Let me put it this way: if I can’t turn several square miles outside my towns into a solid mix of spikes, saw blades and cage traps, I will be very disappointed.

“See that big, open field right in front of my town? The one with lots of enemies running freely through it towards us? Not anymore.”

–detonates a dozen tunnels full of explosives, dropping the entire field into a chasm–

“And that’s nothing. You should see what I do with the wood stockpile when goblins come to steal stuff…”

I know what my defensive project will be…

You know that as soon as we can have ballistae or similar missile weapons and shoot them out a window, someone is going to make a big pirate ship out of their fort with a broadside shot. It’s bound to happen.

detonates a dozen tunnels full of explosives, dropping the entire field into a chasm

oh @Atralane … you have anger management issues, don’t you…

Look, that’s nothing! If i could i would launch nukes at the buggers but i can’t so i shan’t. Probably for the best really, my pore people would have to live in that mess.

Anyway, i would love for us to be able to not just build stone fortifications all bis bash bosh. I want to build a large palisades around the town because it will go sort of quick to build and then i want to build a stone wall that should take a long time to get done and enemy proof, i then want to dismantle that palisade and have a good deference.

Some of this could be a cool secondary mechanic for the trapper or another class Trapper --> Trap Maker?

I know what my defensive project will be…

Meh. The city had all-but fallen when outside reinforcements saved it.

What you need my friend is a genuine Boatmurdered magma cannon… 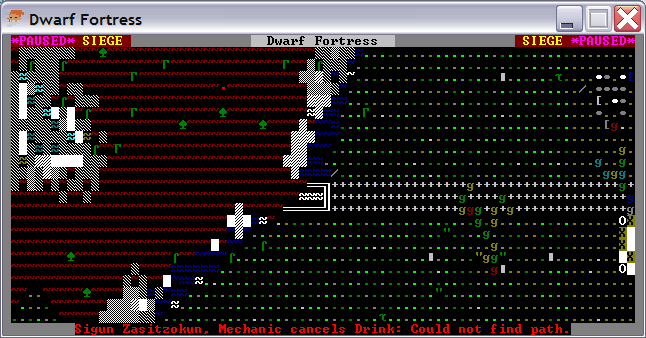 The dwarves flooded about half the map with lava, wiping out everything there.

On the plus side, the psychotic elephants were no longer an issue. Nor were the elves.

Or anything else for that matter.

(Seriously, I’m building that thing once I get the chance

oh @Atralane … you have anger management issues, don’t you…

Nonsense. He just likes sending very… definite messages to any hostiles out there

As long as that is the ONLY part of boatmurdered you follow… that place was atrocious.

As long as that is the ONLY part of boatmurdered you follow… that place was atrocious.

Sadly I don’t think Radiant are going to let us use children as living weapons/shields in SH, nor will they have tantrum spirals

Anyway, i would love for us to be able to not just build stone fortifications all bis bash bosh. I want to build a large palisades around the town because it will go sort of quick to build and then i want to build a stone wall that should take a long time to get done and enemy proof, i then want to dismantle that palisade and have a good deference.

Serious. I’ve been building on the foothills, but haven’t had time to get up into the mountains with all the updates coming out - not complaining.

Just be careful with the palantir.

Siege equipment would be amazing, especially once more sophisticated physics are in place!

While on the topic of sieges it would be interesting if you actually could siege a settlement and starve the population inside by not allowing them to leave their walled in town to get food. Sure they may have farms inside but maybe those farms alone can’t provide enough sustenance

Yes I hope when the game is in more final stages sieges will not be like “hit chunk of wall with sword until piece disappears: run in” but more dynamic.

A good fort in real life could take a lifetime to complete. We could probably scale it down to a month or a few of in game time if most of the population worked on it sort of non stop.

As someone who plays defensively I do believe that these and a wide range of defensive structures should be added to the game as a means of keeping the baddies out! I also firmly believe there should equally be measures for breaking into such a defensive structure so everything is balanced accordingly.

What I would like to see on the defensive side:

On the attack side I think it would be essential to have some things like:

Love this but we cant forget the fire! Like in stronghold you can have these stands that i do not remember the name of and they contain small fires or torches would also work i suppose.

Basicly in stronghold all archers that stand close to it use fire arrows and hence do more damage, in stonehearth we could do some tweking to it, decreasing acurasy and other things to mix things up.

And we cant forget oil already placed on the ground, again from stronghold, you sned firearrows on it and the entire field or how ever big that area of oil is lights up in flames.

Technically I’m not even sure if kids are even going to be in this game? I’ve only seen more villagers by travelers and heard talk of getting more when your town levels up.

Of course it’s still early Alpha so who knows?

Having some sort of automated defense mechanisms, like spikes, pits, walls, drawbridge or archer tower. Because as the size of town increase, the footman can’t be everywhere and it takes them more time to run from one end to the other.