I’d like to start a Group here on the discourse('cause I have a feeling I’m not the only one here who’d be interested in this ^^) to learn and communicate together in constructed languages. We’d vote on a language to learn and then focus on that language until we have a good understanding of it =]

If you are interested in joining, please reply to this thread =D

Once we have a few people interested, We will vote on a language, and then start a new thread devoted to that constructed language =]

Languages being considered
(votes in parentheses)

This would be cool =D

I’d be interested for my vote of Klingon. While being interested in many languages, I’m unfortunately not good in learning new ones, but Klingon is interesting enough for me to go through the hassle.

Call me in I’d love to join this

I’m trilingual and I’ve been trying to learn new languages (spoken in other countries) but lose interest when I need to learn verb tenses or can’t keep up with my friends who do speak those languages. I can feel for your troubles regarding not having anyone to practice with, but wouldn’t a language spoken by many people be of more use, to communicate with non-anglophones and better learn about their culture?

@Raffo and @15phoenix51 Welcome aboard =]
Feel free to start listing languages which you’d like to learn, I’d like to get a feel for what everyone wants. ^^

So… let’s see. Well… for one thing, there is less pressure when learning/speaking a constructed language. There are no divisions of Native and Non-Native speakers, because everyone is non-native. Non-native speakers often have accents from their original language. Often (sadly) people with accents are made fun of, or worse. However, In conlangs, since no one is a native speaker, accents are more expected and less ostracized.

Also ConLangs have their own culture, usually a very specific one. For example, If you meet someone who speaks french, you can tell that they are probably from a french speaking country… maybe, and that’s about all you know. But, If you meet someone who speaks Klingon, then you know that you both have something in common (Star Trek fans) and that tells you a lot more about the person with out having to ask questions.

Some conlangs (Such as Lojban and Esperanto) were developed to be “culturally neutral”, especially Lojban. They provide an equal ground for people to communicate, Which I think is really cool =D
Another thing I like about Lojban is that it is unambiguous. So every letter has only one way to say it, every word has only one meaning, and there are no exceptions to any grammar rule. It’s a lot less messy than organic languages.

Other conlangs (Such as Toki Pona) were developed to change the way people think, kinda, lol. Toki Pona is a 120 work language based on Taoistic way of life. By learning and thinking in a toki pona way, you change how you think to be more simplistic and less complicated… or That’s the theory at least.

So, there are a lot of conlangs out there, and each of them are unique and have their own background. I find it really amazing that people have constructed working languages without needing thousands of years to evolve one.

So… I guess I just find them really cool =D
I enjoy non-con languages too, But there is just something about conlangs that I find fascinating =3 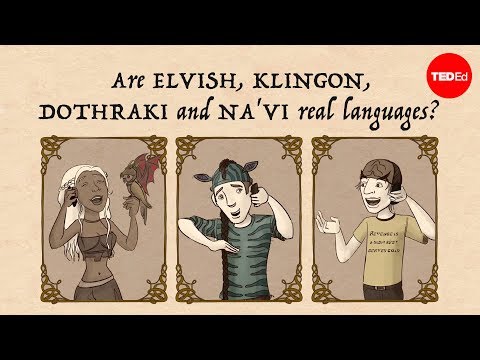 What do Game of Thrones’ Dothraki, Avatar’s Na’vi, Star Trek’s Klingon and LOTR’s Elvish have in common? They are all fantasy constructed languages, or conlangs. Conlangs have all the delicious complexities of real languages: a high volume of...

I would love to join in! Learning these languages might help us add some mysteries in stonehearth, by adding some sort of ruin/ relic maybe? (Or mods at least). And maybe after awhile we can develop our own stonehearth constructed language. But for now I am open to any language you guys want to learn!

after a while we can develop our own stonehearth constructed language.

Best idea ever =O
Welcome aboard ^^

Often (sadly) people with accents are made fun of, or worse. However, In conlangs, since no one is a native speaker, accents are more expected and less ostracized.

Yup… I avoided speaking French for almost a decade, and my accent isn’t at all bad.

Lojban is that it is unambiguous. So every letter has only one way to say it, every word has only one meaning, and there are no exceptions to any grammar rule. It’s a lot less messy than organic languages.

That’s half the fun IMO

Other conlangs (Such as Toki Pona) were developed to change the way people think, kinda, lol. Toki Pona is a 120 work language based on Taoistic way of life. By learning and thinking in a toki pona way, you change how you think to be more simplistic and less complicated… or That’s the theory at least.

Gonna have to have a look at this!

Best of luck with your language pursuits

sounds cool to me, im in!

perhaps we could try and learn the ‘dragon tongue’ from skyrim… if thats possible.
stop looking at me like that, i cant help it if im addicted to skyrim, okay…

also, how would we communicate to each other? with a teams peak kinda program or just through text…

Lets see you lot learn to speak Minion from despicable me. Apparently it is actually a language according to the writers.

Unfortunately, I don’t think it is =[
I’ve played Skyrim (not all the way through) and there just isn’t enough to go off of… There are a total of 26 Shouts(including ones which players can’t learn) with 3 words each. This gives us less than 80 words and no grammar to work off of sadly

how would we communicate to each other?

I think for right now just text, but later on we might be able to work something else out

Gonna have to have a look at this!

Lets see you lot learn to speak Minion from despicable me.

I’ve never watched the movie… so I don’t really know anything about it. However, I did look at the “official dictionary”. It consists of 28 phrases and no grammar, so that’s not enough to go off of either =/
Same goes for the “Sims” language, both are just funny noises semi based on real languages =/

though i didnt read it all, this link is to a thing that has all the known words, as far as i understood at least.

sadly, you are correct, it wouldnt quite be possible to “easily” communicate with this language.

Yeah =[
I took a look at the link, The grammar rules are “The same as English but with 3 exceptions” Which I suppose is okay… except the example phrases Don’t really match up with that. Also, from what I can tell (I didn’t read the entire list) most of the words are nouns. So what we have is English with only nouns… somehow =/

I don’t think this language was intended to be spoken outside of the game’s dialog/shouts. If it was, there would be more too it. =’[

such a pity… but it was worth asking! i think…

it was worth asking!

Of course it was =D all questions are worth asking!

Okay so… since we are going to do this organized like, here are the rules:

Proposing a Language
To propose a language please provide the name of the language, a short description, and a link to a good online resource for learning =] Optionally, you can also link to a book(s) too, but an online resource is needed because not everyone will want to buy a book. You can propose as many languages as you want =]

Voting for a language
You can vote for as many languages as you want, but you can only vote for each language once. If you propose a language, that also counts a voting for it =]

I’ll be keeping tally in the second post of this thread.

To start off, I’d like to propose:
Toki Pona: A small and simple (yet complete) language, perfect as an intro into conlangs. (book)
Lojban: A fully fleshed out unambiguous language, no exceptions! (book book)
Sindarin: The language of Tolkien’s wood elves, It’s really fun to speak, and the writing is beautiful =3 (book)

A fictional language as spoken by the Klingons in the Star Trek universe. Due to the already big fanbase of Star Trek, Klingon is considered to be the most popular constructed language by number of speakers (at least that’s what 'Kipedia says, but maybe chimeforest can comment on that, too. ^^) Due to it’s popularity it even has an official ISO language code (tlh).

There are a few pretty good books about Klingon out there, but there are also quite some websites out there to learn Klingon. There’s of course the Klingon Language Institute (KLI), though it unfortunately seems a little abandoned lately. Wikipedia has a few resources, too (On grammar, as WikiBook or in the Wikiversity) and there’s a separate Klingon Wiki, too. A problem, that might arise is, that apparently there’s barely any vocabulary available for free… I remember that the language was copyrighted some time ago… I’m not sure what’s the current status of this, but it certainly had its impact on the availability of online vocabulary lists…