Welcome to the Toki Pona Language Learning Group here on the discourse!

Goal
We, as a group, will learn the language of Toki Pona!
Toki Pona was constructed in 2001 by Sonja Lang. With only 120 words and 14 phonemes, the language is very simple, yet surprisingly complete. One on the goals of Sonja Lang was to create a zen-like thought process for the speakers of this language. By using a simple language with simple terms, it may help calm the mind when thinking in Toki Pona.

Plan
We should start by working our way through the online lessons by jan Lope. Completing them one at a time with a week to learn each lesson. We are following the pdf version, NOT the html version.
We are currently on lessons 1.5 & 1.6

Toki Pona even has it’s own logo! Which language can say that (pun intended ^^) for itself?

Fortunately for me (being German), most of these constructed pronunciations basically use the German rules, so after shortly looking over the rules, I can already say that I know the pronunciation already. ^^

Cool =D
It’s really frustrating for me (native english speaker) when a constructed language (such as lojban or klingon) uses a sound which isn’t in english. Like ‘ch’ as in the german ‘Bach’ and all I can think is a] I’ve never heard a german say that word, and b] How come english doesn’t have any cool sounds? =’[
I’m don’t get frustrated at the language, but rather at myself (and english) for not knowing how to say something, lol.

Fortunately, all the sounds in Toki Pona are in english too, so that shouldn’t be a problem for the english speakers of the group =D

In fact, it’s possible that jan Sonja picked sounds which are commonly seen/heard in languages so it would be easier for everyone to learn ^^

(I was slightly shocked to see your level of understanding compared to mine, after you said “1.3 and 1.4”, before I noticed that the HTML-version of the lessons I was reading are a lot shorter than the PDF version! switching now! ^^)

My attempt at a translation:

I’m @chimeforest.
I’m eating good food.
It is a fruit.
I drink water.
I want [suna]

)… I hope for the sunny option…

You are correct, I meant to say “I want sun/light” The weather has been pretty drab for the past couple days here, lol.

I didn’t realize that the HTML version was shorter either. I’ll have to make a note of that in the first post.

I think it is just, “I am drinking” or “I drink” … though I could be wrong, I haven’t seen any examples yet of a sentence with “I drink [type of liquid]” Perhaps a better definition of “moku” as a verb would be “consume”? I’m not sure =/

Now… to try an decipher your text, lol.

I’m not so sure about that last one, it has no verbs in it =/
Are you trying to say that a bug is outside?

I didn’t think the juice would be that hard. To be honest, I got inspired to that by reading the Wikipedia article, and afterwards I noticed, that it’s actually part of the practice of 1.5 (second to last sentence).

And yes, I wanted to say that a bug is outside, at least that’s how I understood the meaning “outside area” of “ma”, but as the (?) implies, I wasn’t sure about that one. How would you say it?

Another question: I intended to say something like “I look at my monitor” (or rather “a monitor”), but of course “ilo” itself is not descriptive enough. Looking at the word list, there is of course no monitor, but a picture = “sitelen”. So I would assume, a better way to say “I’m looking at my monitor” would be “mi lukin e ilo sitelen mi” (the last “mi” added for the “my”). What do you think?
Edit: Oh, and adding to this, how could someone talk about their camera? That’s also a “picture device”, but the other way around. Maybe by adding “have/take/obtain” to “ilo sitelen jo”?

“mi moku” is actually both

You are correct, my bad ^^;
That’s what I get for looking more at the appendixes than the actual lessons, lol

it’s actually part of the practice of 1.5 (second to last sentence)

lol so it is. I haven’t gotten that far yet. Something which I’ll have to correct

How would you say it?

I read the ENTIRE DICTIONARY (lol) and found the perfect word: lon meaning "to be located in/at/on"
So “pipi li lon ma” Would mean “Bug located outside” aka “The bug is outside”.
So that was just a word/some grammar which we hadn’t gotten to yet, lol.

As for monitor and camera…hmm
In Appendix 5.9 “ilo sona” means computer (a smart machine) So you could say “mi lukin e ilo sona” to say “I look at the computer”. If you wanted to specifically say “computer monitor/screen”. I think there might be a way to combine the phrases for computer and tv(ilo pi sitelen tawa "tool possesses moving picture), but I’m not sure how =/

For camera, I though you are on the right track. “ilo sitelen jo” tool picture have/obtain. I think I might use “ilo lukin jo” maybe… I’ll have to think about this more when I am more awake, lol. We might be getting into concepts which aren’t in lesson 1, lol.

Yeah @8BitCrab we miss you ='O

im hoping ill be able to catch up soon though.

@8BitCrab no worries =D we’re only like… halfway through lesson 1? I’m sure you’ll be able to catch up when you’re less busy =]

im hoping ill be able to catch up soon though

It’s actually really as simple as they advertise it. You know that there are some people who can easily pick up and learn a brand new language? Some can even master it within a few months or a year? Well, I’m kind of the opposite of those… ^^ And even I managed to grasp the basic concepts of Toki Pona within, what now, a week or two?

This is a completely new experience for me!

what now, a week or two?

Actually, I started this thread 5 days ago, so it’s been less than a week =D

Anyway, let me take the opportunity to say, that the original lessons can still use some revision at some point… Some of the examples or structures are… “amusing”, to say the least. Some of my favorites in the PDF lessions:

Anyway; during listing these things, I got inspired to translate this phrase:

I’m not entirely sure about the first term (maybe “jan ijo”?) or the last part (maybe “…ma li seli”? We didn’t exactly have the proper grammar for this yet), but feel free to try and reconstruct the original phrase!

Yeah toki poni sure does get straight to the point, lol

Now… as for the sentence…

“jan ijo” would mean “person of thing(s)” or “thing person”. since “ijo” is now a modifier of “jan” instead of the other way around.
and “ma li seli” would mean “land heats up” since ‘seli’ would become a verb.

How close am I to your original phrase? xD

Well… If I wouldn’t know my original intention, I probably wouldn’t have guessed it…

As for the last part, where I was not sure, after your translations I now know that I wanted to say “…ma li seli”. ^^

I’ll keep it to this. Maybe with these additions you can already guess the phrase I was going for. Otherwise I’ll disclose the mystery in two posts from now, and we can discuss, why the translation was not good enough to identify the phrase.

Edit: I was looking at the wordlist and noticed, that “jan” already means “somebody” by itself… Therefore the corrected sentence (to the best of my knowledge) would be

But as I said, I would love emphasize the “some” of “someone”, maybe even the plural… Maybe “jan mute”? But wouldn’t that be more specific “people” instead of “some people”? Can this be done in Toki Pona, or is this part of the intended ambiguity?

I would love emphasize the “some” of “someone”

You are correct in that “jan” by itself can be plural/not plural.
“jan mute” could mean anything between “people” to “some people” to “many/lots of people” it basically makes the noun it modifies plural, but it doesn’t specify to what degree. It’s part of the ambiguity of Toki Pona, I think. I’d be nice to have a middle word, lol. or an “unintensifier”… like “mute” means ‘many’ but “(less) mute” could mean ‘some’. Maybe we will find a way to to that later on in the lessons =]

Speaking of, I think it would be safe to officially move to lessons 1.5 and 1.6.

Edit edit: I looked ahead into the numbers/counting chapter(1.16) and it has info on specifying amounts =]
[1]: projects - jonathan gabel . com

That… is certainly a beautiful phrase, but not at all what I had in mind… ^^ As my sentence sounds more terrible than yours, I’d like to point out that I came up with the idea while I was compiling these things as “k as in killing” and “pakala”…

OK, here’s what I wanted to say:

Yeah… I think I like my translation better =P

compiling these things as “k as in killing” and “pakala”

But you were also thinking of other things…

Speaking of which: already in the second lesson you learn how to express your wish to sleep with someone. That’s language learning efficiency!

…and one lesson later you get to learn the expression for prostitute, and spoilers: I peaked a little ahead, and later this term will be used to describe Heather. ^^

So I could have gone that route, but choose not to, lol (“personal thing wants to see a hot place” for example, lol) which is why we have the toki pona word ‘unpa’, lol so when that it is brought up we KNOW what it going on, lol.

Probably a little bit of both. Perhaps stacking more words on to be more specific… for example perhaps referring to the world as “ma sike suli” = important/big round/spherical land/outside aka earth? and for burn, perhaps use “seli pakala” = heat up destructively. So… if we use those… the finished sentence would be something along the lines of:

I thought a bit about this after I posted my responce earlier today, and I came up with “tempo sin” = time of renewal, based on Appendix 5.16 which gives phrases for summer (tenpo seli, time of warmth) and winter (tenpo lete, time of cold).
btw, I can’t seem to find that example on wikipedia you found, would you mind copying it?
Also, In A.5.16, “tenpo suno” = time of the sun, aka daytime, so “tenpo suno kama” = time of new day would be morning, I would think… except I just looked again, and it means ‘tomorrow’, since Toki Pona doesn’t have a word for ‘next’, “tenpo suno sin” time of renewed day = morning, lol. Just goes to show how ambiguous this language can be I guess. So… following those examples “tenpo suno seli” would be a very good way of saying ‘noon’ =D
Also using “alasa” (tempo alasa, time of harvest) would be a great way to say fall ^^

this writing system is “ike”

Now that I think about it, I agree, it is very very “ike” lol. But it looks cool, so I think I might keep at it, maybe, lol. Maybe I/we could come up with out own writing system? or perhaps toki pona is best without it’s own writing system…

Looky what I got this week =] 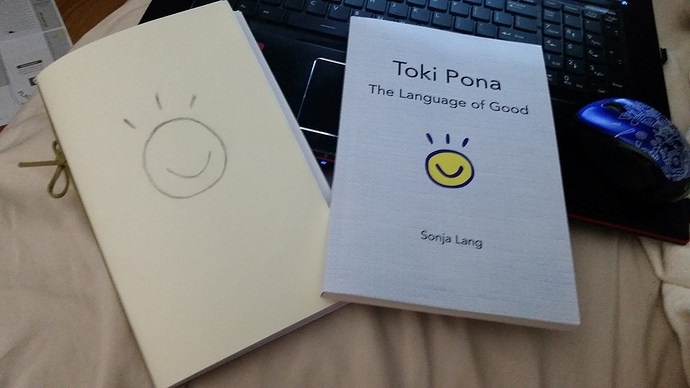