Hello, I’m Omegasa and today I bring you the invention of a small cart decoration. It’s my first mod and i’d really love & appreciate some feedback on it.

Currently the cart is just a decoration and counts as a 16 item storage crate. 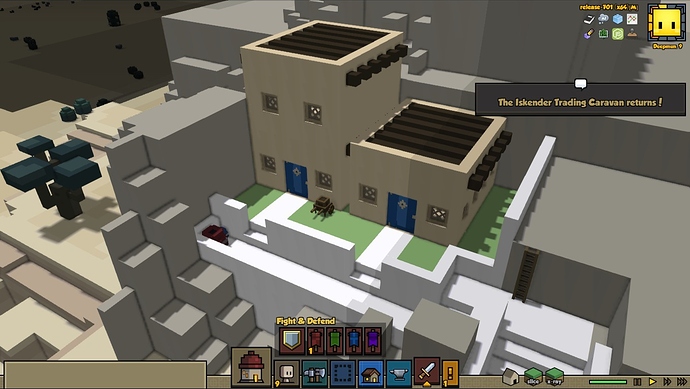 13 Likes
Working Railways and Carts
A discussion about a potential future mod, series thereof and/or poll to know which you might like
Fornjotr February 7, 2017, 7:30am #2

But it seems to be missing some support in the front? When you write “currently” Does that mean that you have future plans for this cart? And if so, what are they? Carts are the future!

I agree with @Fornjotr though, looks like it’s gonna fall over lol.

With animation applied to the models, it is possible to bend it to a diagonal.

That’s actually a really awesome idea @BrunoSupremo I am not entirely sure how to do that but it will be on my todo list next.

@Fornjotr I’m still pretty inexperienced with the modding end of things but I want to modify the recipe a bit to make the cart only 1 wood block in cost as well as a small crate which is what it’s modeled from, I also would eventually like to animate it to bend to look a little more realistic, but until I can manage it I’m thinking either a block of wood or stone to set it on to keep it upright.

This is more of a test run for me to be honest, I would really like to make a bunch of props to make the towns of stonehearth looks more… lived in and less empty. If I had the skill I would try to make the wagon usable and dragged behind a hearthling but until I can this is the next best thing.

What does it look like being carried? You might be able to make it look like it’s being pushed on the ground just by changing the position of the iconic form.

It’s small at the moment in it’s iconic form, but that’s also a really good idea. The only issue I see is putting it into a stockpile it will likely look weird.

That looks great @Omegasa! Winning the race to make a usable cart in Stonehearth has begun!

Lets get these haulingissues to disapear… Maybe its like nasa versus the private sector, to get a human on the surface of mars? What do you say developers? hehehe…

If there are any town decorations you would like to see made I’m looking for more ideas constantly.

Compare that to the large vase and crates, its a bit small, might want to enlarge it. LOL by the way, was thinking about carts the other day. I have ideas, but since you started this, if you want more cart ideas, i throw them to ya

note:Like a Soldiers wagon(4 wheels, depict shields on side and weapons in wagon), with the large Blacksmith Chest on the back, could make it only store weapons and ore/bars

It feels much more like a wheelbarrow more then a cart for the names sake honestly. I’m still really inexperienced with modding but thanks for the ideas

If i learn how to manage it i just might make it.

Indeed, the race has begun. My overhaul of BrunoSupremo’s Minecart Mod is now my top priority!
By the way, @Omegasa, I’m not trying to usurp you. I just started modding this game yesterday! I just like contests… they give me more motivation to actually do stuff.

Edit: Just realized this thread is from 3 months ago…

Heh, I do the same thing. I’m like oh this is great lemme post and then see the 2-3 months later bit and realize that might not have mattered. It’s always good to add some new life to the forums and draw attention to threads or ideas folks may not have seen/thought about.

@Matthias This is true. I’ve been quite busy with life and my pc died so until I replace it i wont be modding much. @Logo I’m silently stalking the discourse as I am able.

Sorry to hear about your pc.

Good to know you’re keepin’ an eye on things.