So I was digging an underwater hole to lure enemies into and trap in and the water falls into the hole and does this. 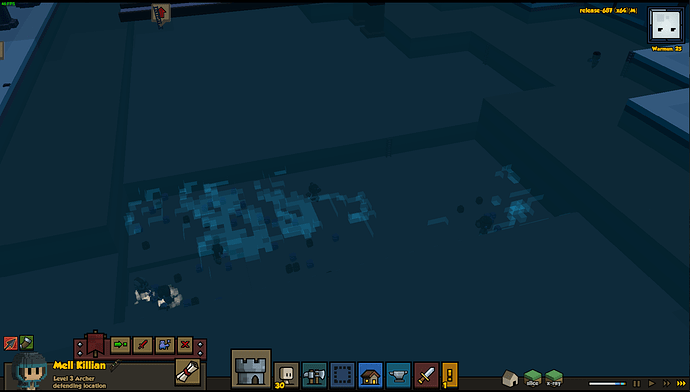 Capture.PNG1860×1057 133 KB
It isn’t moving, and it hasn’t noticeably reduced framerate(i always get somewhere from 40-60 dependant on how many Hearthlings are on screen and gamespeed).
Is this just the Engine bugging out or is this something I’m doing wrong?
MoonSight December 4, 2016, 6:58am 2

Welcome to the discourse @rewdmister4 !

I’m no moderator or dev, so i don’t have much answers, though i’m sure it’s one of the many water glitches

Also, since this is a bug, i’d suggest selecting the ‘bud report’ category by editing the top post

Water physics as of now is still very buggy. So for now i’d say no touchy-touchy.

At this point I think the save is completely gone, as the UI now doesn’t appear and reloading the UI, game, Steam, and PC doesn’t help. It’s stuck in an infinite pause. RIP the island trading town of Aspcoin till the game gets some bugs fixed

Water has been broken for MANY upon MANY updates now. It’s one of the many things they “will get to later”. Honestly, the best way to do it is use the individual voxel mine tool and do one layer at a time, saving between each layer. This error happens more so when water can only flow into a spot from one direction. Through testing, I’ve found that the more direction water is flowing in from (multiple sides + top), the less likely this artifact happens.

Here is the save(s). In the zip are the saves, building templates, and 3 mods I used. The issue might have something to do with the fact that I changed the config on SiloMod to allow it to run on the latest Alpha build. I uninstalled it and have only gotten one bug, compared to the 5+ I had on Aspcoin. You don’t need to worry too much about the town, but if anyone can fix it I’d be really thankful

You are right, there’s an AI error coming from silomod; that mod has incorrect references to stonehearth (maybe because it’s outdated).

That might be why everything is broken (stopped), but I’m also curious about the UI, since after loading I can see debug tools (I have them enabled), but after I do F5, they disappear too.

Even if it’s caused by a mod, thanks for all the files. They are useful for debugging.

Edit : hmm I’ve disabled the silo mod, left the savefile loaded for a while, and in the end everything finished loading (the UI, and people started to move). I guess my pc couldn’t handle your town

Even if it’s caused by a mod, thanks for all the files. They are useful for debugging.

My only argument to this, is that I don’t use mods, and I can still get these same artifacts. Not nearly as many as shown here, but the same none the less.

I was referring to the freeze on load, not the water bits.

Of course it’s useful for that, too.

I will disable SiloMod and try to see if that fixes it. If it doesn’t, ill create another tread for that issue