In R 2494, a footman in presence of a two handed sword will take it BUT he use it one handed + shield. That’s not the behavior one could expect (in general, two handed are supposed to have bonus to damage but prevent holder from using shield). My suggestion would be to stick to what people would expect and create specifics animations (sword on the shoulder while patrolling, ample slash from ground to head for combat, etc)

These things are planned. The 2h weapons have only begun to be implemented.

Yeah, they still lack implementation, I’d say they are just unfinished for the moment… Moving to suggestions 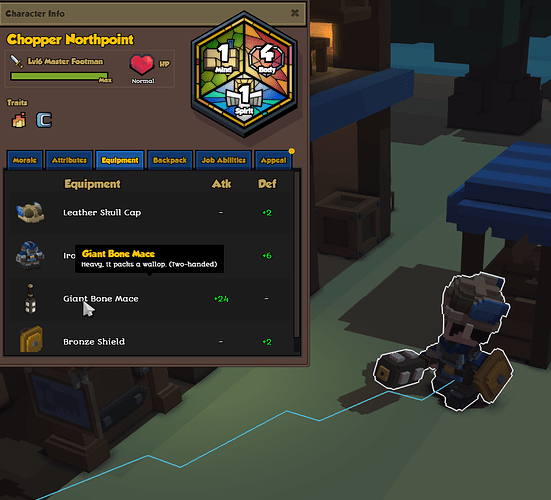 Since it is a “suggestions” topic, my suggestion is this:

Uhm, I thought that was fixed already. Is that soldier or his items from previous versions?
The two handed items have a little json code in them that blocks shields from being equipped.

Edit:
Oh, I think it is a bug, because the weapons are blocking the second hand, but shields are equipped at the arm not hand.

Uhm, I thought that was fixed already. Is that soldier or his items from previous versions?