That was kind of the point of adding an inventory limit as it greatly increases performance as well as kind of forcing you to build and craft more.

I havn’t run into any issues with the inventory cap and have managed to make a 10k plus worth village.

Yep. I do the same. I have my carpenter and mason maintain various items and sell them all basically every time a trader comes through.

I do the same - but - gold does take up an inventory slot - a LOT of gold fits into one slot, but it will create a little basket with coins in it. And when the basket is full, it makes another one.

I do have a major issue with item cap, but I think the requirement is there to stay (due to issues with run time - which makes sense). However, I think this could be solved in other ways - like:

Could also help to see which items there are more of if the inventory by color coding the text of each item (white/yellow/red) - sometimes I miss that I have 500 silkweeds or something.

Hey. Currently, the easy way to remove the inventory cap is to open the stonehearth program file at C:\Program Files (x86)\Steam\steamapps\common\Stonehearth, open user_settings.json and put add in the line about infinite inventory.

Make sure to add the comma after the hearthling paths line, otherwise you’ll get an error.
This should make it to where the inventory limit no longer exists, although its not quite the answer you seem to be looking for.

What @thelegorebel mentions will have a simpler way of doing it in A16; with a check box if I remember correctly. Don’t know if it is in A15, but I noticed a new check box in options in A16 to do what that person mentions.

I too don’t really know of any way to increase beyond actually modding it. I believe there is a way to mod that to be different; however I am not too savy(familiar) with modding of this game enough.

Like the others mention, it is most likely going to stay, and I actually don’t mind the current A15 adjustments. A14 was a lot worse. Sure I think it had the same cap, but there were things in the prior version that made that cap too easy to reach. Now only certain items and things are contributing to the inventory count; half of what was in A14. So it is quite an improvement.

Regardless, maybe in the future there will be a slider for it along side the check box that will be coming. Assuming if I read that option correctly that is in A16-test branch.

Hey. Currently, the easy way to remove the inventory cap is to open the stonehearth program file at C:\Program Files (x86)\Steam\steamapps\common\Stonehearth, open user_settings.json and put add in the line about infinite inventory.

a little “warning”: part of the reason the inventory cap is their is for performance reasons, as such Yang (i hope you don’t mind me saying this @yshan…) has said that she will not be answering any performance reports of people who have unlimited inventory on

which are worth more than the raw materials put into them

just encase you didn’t know, raw resources (stone, wood, etc.) do not add anything to your networth.

What @thelegorebel mentions will have a simpler way of doing it in A16; with a check box if I remember correctly. Don’t know if it is in A15, but I noticed a new check box in options in A16 to do what that person mentions.

Regardless, maybe in the future there will be a slider for it along side the check box that will be coming. Assuming if I read that option correctly that is in A16-test branch.

loading up the game and checking the settings, i see no such check box… but i might just be too tired to notice it…

yeah… Like I said, I might have misread… and looking back, I think it might have been the randomized option or one of the others… Something on the first tab or the gameplay tab. However since that was last friday that I checked; likely just not remembering correctly.

My apologies… Could have sworn though… The troubles with having an overactive imagination sometimes, especially when tired… ><

Thank you thelegorebel you have helped me greatly.

No problem! However, as @8BitCrab said…[quote=“8BitCrab, post:8, topic:21559”]
a little “warning”: part of the reason the inventory cap is their is for performance reasons
[/quote]
If you get a dip in performance, the cause is probably the now lack of a limit.

I am currently hitting the inventory cap continually and please excuse me if I am posting rubbish comments but I am struggling to understand how this will work long term in my game. I capped my game off at 34 hearthlings because I wasn’t sure my pc could handle many more adequately. This capped off the inventory.

Question 1. The inventory seems to include all the items in the game. I am not clear if it includes buildings. Does it? Because if it does the cap is a limit on the the amount that can be built and the size of the town as well.

I have now increased the hearthling cap (against my better judgement) and of course the requirement is to obtain so much extra food. So I will have to have more food in the inventory (which is full already, and I keep selling items madly) and so the whole thing becomes circular.

I have looked at destroying some of the inventory items but most of it is minerals and stone still sat in the mines. I would have to spend hours of real world time to delete hundreds stone and mineral chunks by hand. And if this game was not in test a user would not expect to need to use the console. The comment about the game files in this post from thelegorebel will be helpful but this is only a short term solution, and only appropriate while the game is in test mode.

Question/suggestion 3. Is it possible to enable a destroy mechanism as part of the inventory mechanic? So allow undeployed items especially stone and such to be dumped in a dustbin from the inventory.

Suggestion 3a - My problem seems to have been caused in part by enthusiastic mining, (which I did because I’m trying to build a big town) is there any way to add a tool tip when you highlight a mining area please - to say (not what the items will be - I like the surprises) but just how much of the inventory you are likely to fill? Say in percentage terms or a graphic?

Suggestion 3b - After a town reaches a certain size, say 20 hearthlings, I suggest remove the food requirement or reduce it. If there isn’t enough food they will starve (aah sniff) but the reality is that a town of a respectable size has food to spare.

So apologies again if this is all rubbish but I am becoming quite concerned about the inventory cap and the adverse affect it has on gameplay. Is it just me? What do others think?

Hope this is helpful. I have spent many enjoyable hours on this game so please keep up the good work.

Buildings don’t count against your item limit, but furniture placed in the buildings does seem to. That’s just an observation though so if someone comes along and says I’m wrong, assume that I am in fact wrong.

I believe that if you cook food, you’ll get more food value from a single item. I know that in my games when I have a cook constantly working, I keep a high food value without hitting item cap (plus cooked food rots more slowly so you’re more likely to be able to either recruit another hearthling or sell excess, whichever is more useful at the time).

There is already a destroy item mechanic. You should see it from your gather/mine menu, the x will allow you to drag out an area and everything in that area will get destroyed once a hearthling gets there and starts smashing things.

Inventory cap requires a little bit of practice to get used to, but once you do you should hardly notice it. You don’t need a thousand wood in stockpiles; just make 500 swords to skill up your people and sell them off to the next wandering merchant (why do they have so much gold?)

Thanks for your reply MostlyLost.

I had forgotten the x in the mining tools so that is very helpful.

I have two cooks working in my town. But my point about food (for the developers to consider), was that you hit the inventory cap, which is there for performance reasons, and then you have to add even more to your inventory in order to raise the cap. I don’t understand the reasoning for this mechanic.

In my case the inventory issue seems to be largely due to stone.

I have uploaded some images to show what is going on. The mason and the town inventory both show huge amounts of stone available - over 700 hunks of stone which seems rather a lot. However the sales screen for the merchant only shows a small amount - just 62 hunks of stone so I can’t sell the apparently huge 600 plus reserves.

I still suggest that the inventory (with or without a cap) needs to be looked at again. 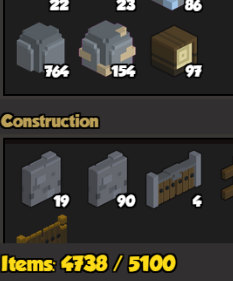 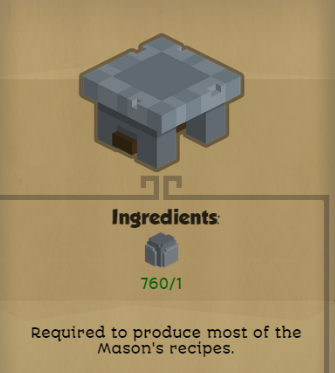 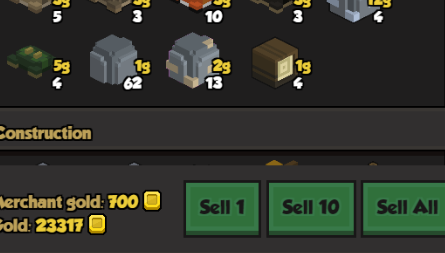 I think they could extend this issue by adding more group items like with the log’s and stone piles and then automating it a bit.

Have this automated were if you have more than ‘x’ of a individual item it auto ques a worker to take ‘x’ of those items and turn them into the new item. Also have in the task priority that individual items will be used first.

The numbers have no meaning other than to explain the concept, they could be any size

You can already automate item stacking/manufacturing by manually adjusting the job queue. Say you’ve got a lot of wheat and don’t need it right now. Place the bushel of wheat task at the very top of your cook’s job queue. Below that, put the flour recipe, or whatever. As the wheat comes in, the cook will grind flour, but if the farmers and workers are bringing in a whole lot, the cook will stop grinding and start making bales. When there’s less than the amount needed to make a new bale, the cook will go back to grinding flour.

I usually keep a 400-unit order of vegetable soup at the bottom of the cook’s queue; a 400-unit order of wooden swords at the bottom of the carpenter’s queue; 400 stone gargoyles, 400 spools of thread, 400 bars of copper and tin. That way even if I go several game days forgetting about a hearthling, they’ve got orders, and they’re not just wasting time. If the item cap is a recurring problem for you, you could do the same with piles of wood and stone and bricks, and the like.

I guess what I am getting at is mostly for the raw materials not the processed ones… ok not all raw, the potions I think should have a bulk storage crate .

My town is dying of inventory being full

Dont be me and forget to sell items