So I got a little bored this evening, and decided to try and break something see if I could build something interesting in Stonehearth. 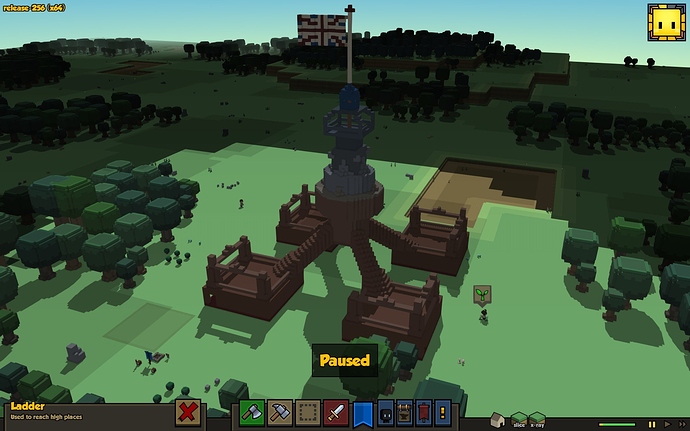 Mind you, I did use the “ib” command in the console to build it, because good heavens that’s a lot of stone, and I dread to think of the pathing AI trying to figure out how to build that thing.

Not shown (added them after the SS was taken) are the 4 central ladders that go right to the top. This is a functional building BTW - those diagonal legs are stepped corridors up to the middle, and you can go all the way to the top (AI permitting

). I’ve noticed a couple of bugs (a hole in one of the base’s roof), but for a “first draft” building I’m rather pleased. Mind you, viewing the inside is quite difficult, because wall transparency mode doesn’t work here, and if you view just the base of the structure you end up with a mere 4 squares at ground level

I’m thinking my next little project will be a castle, but it’ll have to wait (need my sleep

Looks great, sir, now to fill it with horrible traps and a lava release mechanism of some sort.

You’re not supposed to fly that particular flag!!!

so many great builders here on the discourse! now i really need to get to work on my “project”