Hello there, fellow Stonehearthians. I’m Dr. S. Cube Ph.D, here to inform you of a new theory I have been thoroughly researching for the past several months. Thank you for taking the time to here my lecture.

What, you may ask, is Dr. Cube going to tell us about? Well, ask no longer, for I am unveiling my studies: a revolutionary theory that may overhaul our understanding of the current Stonehearthian evolution theory.

While there is no true, legitimate Stonehearthian Evolution Theory, (SET), the accepted belief is that Stonehearthians diverged from apes several million years ago, yadda-yadda, just like we, Homo sapiens, did. However, new scientific discoveries that I have made proves this belief wrong! The Wombat Evolution Theory (WET) is backed by hard evidence and cool drawings!

I have been excavating near Steoffersington by the sight of the recent berserk mammoth attack when I discovered that the mammoth had unearthed a hole that had some odd looking bones in it. I peered over and they were unlike any I’ve ever seen! Take a look at slide 1: After further analyzing the bones, I found it to be a missing link between wombats and humans. Now we all know the normal wombat, or Vombatus ursinus: walking serenely, being cute, munching on leaves, like Slide 2: Finding these bones led me to analyze what I believe is a very early ancestor, barely beginning the wombat-Stonehearthian transition, which I have coined the name Vombatus stantes, or Standing Wombat which will be Slide 3: 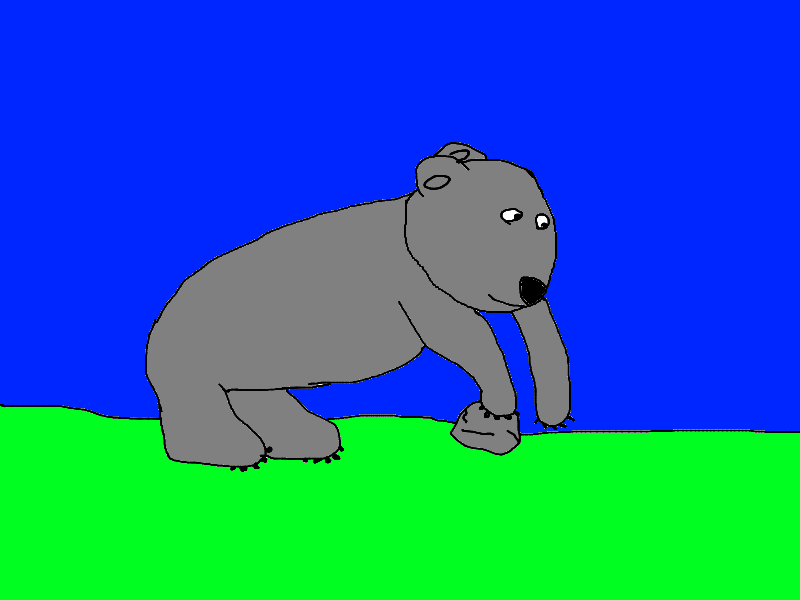 As you can see, it uses 2 feet and can hold rocks for use. Also, the eyes are bigger and slightly more near each other and stubs that will become toes have grown.

While this is an extraordinary find, I hungered for more proof in order to cement the WET. After scouting several areas near Steoffersington, I struck gold: I found a more advanced form of the wombat evolution. This is where wombat evolution diverges completely with Stonehearthian evolution: Thus, we must adopt a new species name: Patriasaxumfoco facem, or Native of Stonehearth torch, because of the species’s adoption of fire: Obviously, this species has adopted the use of fire. Also, his nose has become more human shaped and his ears have finally moved the the humanoid position. The wombatish fur has receded and is now only on the hindquarters.

After meticulously combing through every inch of the land near Steoffersington, I finally found a final species: the missing link connecting wombats to Stonehearthians! I’ve named it Patriasaxumfoco iungo, which means Native of Stonehearth connector for obvious reasons:

Aside from residual fur on the back of the neck and the nose being slightly dark, this species is almost identical to a normal Stonehearthian.

Here is a scientific diagram showing the slow evolution from wombat to human:

Huge thank you to my colleague @The_M!

I rest my case: there are 3 species I spent months researching and a few minutes drawing. Anyone can connect the dots and realize my theory is legit. Please implement my WET theory into background Lore!

23 Likes
Steffers Geodamo Siphoning Center For Painting And Stuff
Meanwhile in the Team Radiant Kitchen
REPEATFEED RᴇᴘᴇᴀᴛFᴇᴇᴅ RepeatFeed
Ancient beings and their involvement in gameplay
In Honor of the 130,000 Year old Mastodon, I will suggest Fossils and Archaeology
SteveAdamo March 29, 2014, 2:45am #2

i am at once, both amazed and terrified by this material… in fact, its so frightening, its awesome…

This discovery is astounding. Sadly, it changes nothing of Stonehearth life. It is interesting to know but it will not help me combat Cthulu when he comes a-knocking

This is very exciting and highly interesting, however I feel bad to inform you that what you have found is not the ancestor to today’s Stonehearthian but rather its “cousin” that went extinct several thousand years ago.

The proof lies in a recently discovered fossil:

a common manatee. This leads to the very logical, and only, explanation that

trichechus manatus is not only the ancestor of stettlerus villagerini but also trees and an as of now unknown species that has not been identified yet, but likely resides in the depths of the ocean.

Now you may ask, why is it that stettlerus villagerini is today’s Stonehearthian and not Patriasxumfoco iungo? If you take a look at the skeletons, you will find out rather easily why:

Patriaxumfoco iungo has more limbs than today’s Stonehearthian, also it is round and seems to rely on ribs for stability in its chest cavity, something only known from animals.

In contrast, Stettlerus villagerini differs from the Stonehearthians we know only from a slightly different skull and a more refined movement apparatus.

I can therefore safely contest your idea that the origin of the Stonehearthians is the wombat by proving that it is actually the manatee. Interesting work on finding a cousin to our Stonehearthians, however. I wonder what happened to them?

Now you may ask, why is it that stettlerus villagerini is today’s Stonehearthian and not Patriasxumfoco iungo? If you take a look at the skeletons, you will find out rather easily why:

Aha, Professor R.Pan, that is where you run into difficulty. You see, the images above are crude artist’s interpretations and not legitimate scientific renderings. If an experienced voxelier could render it correctly it would look identical to Settlerus villagerini’s skeleton.

You are destroying the reputation of the Stonehearthian scientific community.

Takes off glasses and rubs them angrily

Obviously it takes a *** Real*** scientist to sort this out. I shall do some research and such into this topic and come back with my findings. This may take days or even hours.

Hmm. It may be that the wombat is indeed the ancestor of modern Stonehearthlings, but frankly I’ve yet to see any theory from Dr S Cube et al that adequately explains the loss of the lower arm. The manatee’s very short fins evolving into Stonehearthling arms seems somewhat more plausible, though I think the debate is far from over. Ideally of course we’d find some ancient DNA LUA that could shed light on it, but given how poorly most data storage mediums fare in the long term I doubt we’ll find any. Still, there’s always the possibility of more fossil finds that fill in the gaps in the record.

Evolution: Making no sense in any regard since 1859. o_O

*Stonehearth *Evolution: Making no sense in any regard since 1859. o_O

I think I corrected it for you…

but frankly I’ve yet to see any theory from Dr S Cube et al that adequately explains the loss of the lower arm. The manatee’s very short fins evolving into Stonehearthling arms seems somewhat more plausible

I’m not sure what you mean but what looks more like a human arm and hand:

This wombat arm, which has a fully developed hand and arm: Or this manatee that has barely a stub for an arm and is a water animal: Which one do you think looks more like this:

I have reason to believe people evolved from Birds (Also known as Super advanced stealth dinosaur) or Moles. Right now there are too many variables. Once I have narrowed down the preresquisites then we can begin work on identifying what stonehearthians evolved from.

Using the newest 200 mammoth power super computer at Stonehearth tech we have rendered new images based on fossil evidence that clearly show how the evolution from the wombat and every stage in between happened you simply cannot dispute this evidence.

In stage 1 you can clearly see a wombat, look at his cute ears and button nose and tell me that isn’t a wombat.

And then in stage 2 the wombat starts to have a more arched back as it begins its journey to walking on 2 feet.

At stage 3 after million of years of evolution the ability to walk on 2 legs is achieved but the journey to opposable thumbs has only just begun.

At stage 4 the creatures head has grown larger to accommodate a brain that will one day take a piece of wood and turn it into fire.

Now at stage 5 we see the beginnings of the modern Stonehearthian as he walks upright with opposable thumbs and has now become more self conscious, so has fashioned himself a loin cloth to preserve his dignity.

In the final stage we arrive at the modern day Stonehearth citizen in his fine shoes, tailored clothes and fancy haircut to match.

Hmm?[/quote]
The good doctor is very droll, as it is well known amongst all eminent natural philosophers that it is the skeletal structure which matters, and not the length and number of fingernails claws. As seen here, the vestigial lower arm of the manatee could very easily shrink to nothing, and there have been a great many examples of mammalian creatures transitioning between sea and land, such that the re-emergence of proper hind legs need not be considered an insurmountable difficulty.

I do not wish to be taking sides in this, but rather merely to point out that both hypotheses are still very much in the fight. I look forward to the next discussion on this matter at the Institute of Voxels. Well, provided the poison-laced cookies are left home this time: I understand poor Lady Westwood is still recovering from the loss of her HVA*.

@The_M, exemplary work! You’ll get half of all the Internet Points I shall receive in grant money for solidifying my evidence!

Quick favor: could you divide all of the stages into individual pictures and (maybe) have them spin?

I do not wish to be taking sides in this

It could get quite ugly… @RepeatPan is known for his dirty, underhand tricks! Looks around suspiciously

Pffft, please. I am a scholar, and know of all the going ons of the Discourse…

This is the greatest thing discovered since . . .

What to do with dwarves, what to do…

Also, the link between this:

Hey, hey, you saw @The_M’s voxel creation and my glorious theory: there is no dispute!

Well, just that pesky @RepeatPan but he can be dealt with under ideal circumstances: overly expensive wine, some accidentally dropped chloroform tablets, and a body bag is all we’ll need.

Well, just that pesky @RepeatPan but he can be dealt with under ideal circumstances: overly expensive wine, some accidentally dropped chloroform tablets, and a body bag is all we’ll need.

Alright! Have a nice time with @RepeatPan! I’ll just be right here trying to call the Police.