This is a Concept drawing of her right now 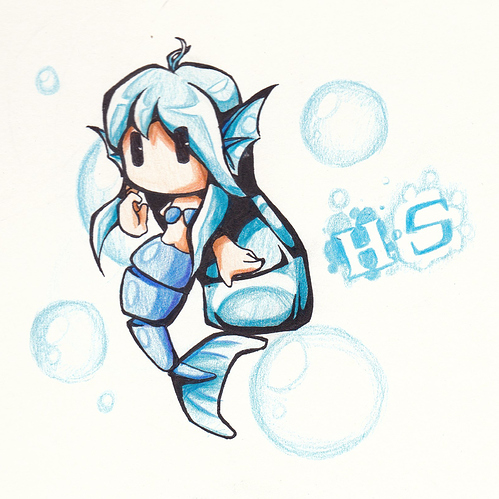 By the way, this is my Hand drawing Coloring Style, witch i use in almost every coloring

I will make a Merman, Witch will probably need a slightly shifted animation due to it’s shoulder location being a bit different from the female model.

And also, they’ll have some skin color variations and some variations for the hair and so on

But still, i will be Finishing the [Golem][1] and the [Harpy][2] Before i Start animating the two

Amazing drawing, wish I could draw as good as you.

Pencil mocks him out of sight.

Just one thing, will these mermaids be Sirens and lure sailors to their death?, just your average friendly mermaid or the mermaid that drowns and eats men?

By the way, this is my Hand drawing Coloring Style, witch i use in almost every coloring

Sirens are from greek mythology. They used to be half women/half bird before they got cursed and lost their wings. They lived on an island and would sing to enchant sailors, which would cause their ship to crash into the island. They were defeated by Odysseus. In Greek mythology, the Sirens (Greek singular: Σειρήν Seirēn; Greek plural: Σειρῆνες Seirēnes) were dangerous creatures, who lured nearby sailors with their enchanting music and voices to shipwreck on the rocky coast of their island. Roman poets placed them on some small islands called Sirenum scopuli. In some later, rationalized traditions, the literal geography of the "flowery" island of Anthemoessa, or Anthemusa, is fixed: sometimes on Cape Pelorum and at others in the islands known as the

Mermaids also stem from greek mythology. Back then they were called Naiads and Oceanids, female spirits of the water who would entice careless men with their bodies(not their voices) for the purpose of *cough* “procreation”. Which, in some cases, could cause the man to drown if they were in an ocean, for example.

Over the years these two separate beings(sirens and mermaids) have gotten confused enough times, that most people don’t know the difference.

Wow!, that’s a lot of information @chimeforest Thanks!

And Boy we were all so confused between them. (if you serch ‘Siren’ in google you get a mermaid)

Witch is up to me of course

can’t wait to see your voxel implementation as well…

I suggest just changing the colour of the mermaid and a few minor details and have them lounge on rocks like a sea lion and you have your siren. Probably easier in the long run and would explain why the Mermaids in the water are also interested in eating the men or at least drowning them for fun.

The wings would be on her back. When Hades took Persephone to the underworld, Demeter(Persephone’s mother) granted the Sirens the ability to turn into birds to look all over the world for her daughter. However they eventually gave up and settled on an island. When Demeter found out she cursed them to live in bodies which were half human/half bird.

So the wings would have to have been useful enough to fly about with. Though magic could explain that too, I suppose. (also, I think later on they lost the wings though b/c of another curse… but I’d have to look that up.) 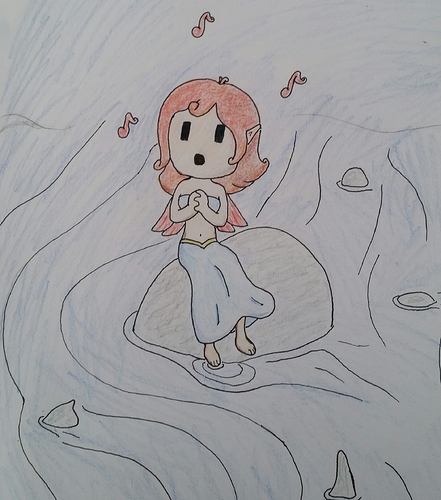 I gave her red dragon-fly wings, 'cause they looked better in the drawing, though technically they should be bird wings.

I think that her affect in game would be to enthrall Stonehearthians. Any Stonehearthian who gets too close while she is singing, can do nothing except sit and listen to the enchanting music.
Maybe even goblins and other non-magical humanoid creatures would stop to listen too?

Interesting fact: In Greek mythology, Sirens are not a race of people but a set of individuals each with their own name. Depending on which source you read, there are between 2 and 5. Though traditionally the Sirens are 3 individuals.

I think that her affect in game would be to enthrall Stonehearthians. Any Stonehearthian who gets too close while she is singing, can do nothing except sit and listen to the enchanting music.

Making you need to train a ranged unit to kill the overgrown bird.

If you need any modeling help, I’m more than happy to help. Awesome work @Hyrule_Symbol

wow! words cannot describe how much i like it!

Maybe, maybe not… Depends whether or not the Hearthlings can break out of her spell or not… which is up to the modder.

Maybe while listening to the Siren’s song they doze off for a quick nap, only to awaken feeling super refreshed minutes later, wondering what happened to that beautiful lady…
In which case that would be a good thing =]

EDIT: Also defeating the Sirens (in the original greek epic) was a bit more complicated than just training an archer, lol.

Depends whether or not the Hearthlings can break out of her spell or not… which is up to the modder.

Either way, you are going to need to kill it so you get your Hearthlings back or make sure you don’t lose anymore.

Maybe while listening to the Siren’s song they doze off for a quick nap, only to awaken feeling super refreshed minutes later, wondering what happened to that beautiful lady…In which case that would be a good thing =]

But how exactly does that fit in with the Sirens luring sailors to their doom?

Also defeating the Sirens (in the original greek epic) was a bit more complicated than just training an archer, lol.

Turning it into a porcupine should work.

That looks amazing @chimeforest !
you deserve the title of ‘Master of color’
(i want my title to be… ‘spectrum’ )

I red the Wiki, it sayd that the sirens will die if a sailor manages to escape from the magical singing and goes away. (witch will be a chalange to implement)

I like the idea of having Mermaids friendly, more then a man… drowner…?
Since we’ll have Sirens to do that job.
@Newf
Thanks for bringing it up

Thanks for bringing it up

I’v came with a WIP Model for the Mermaid 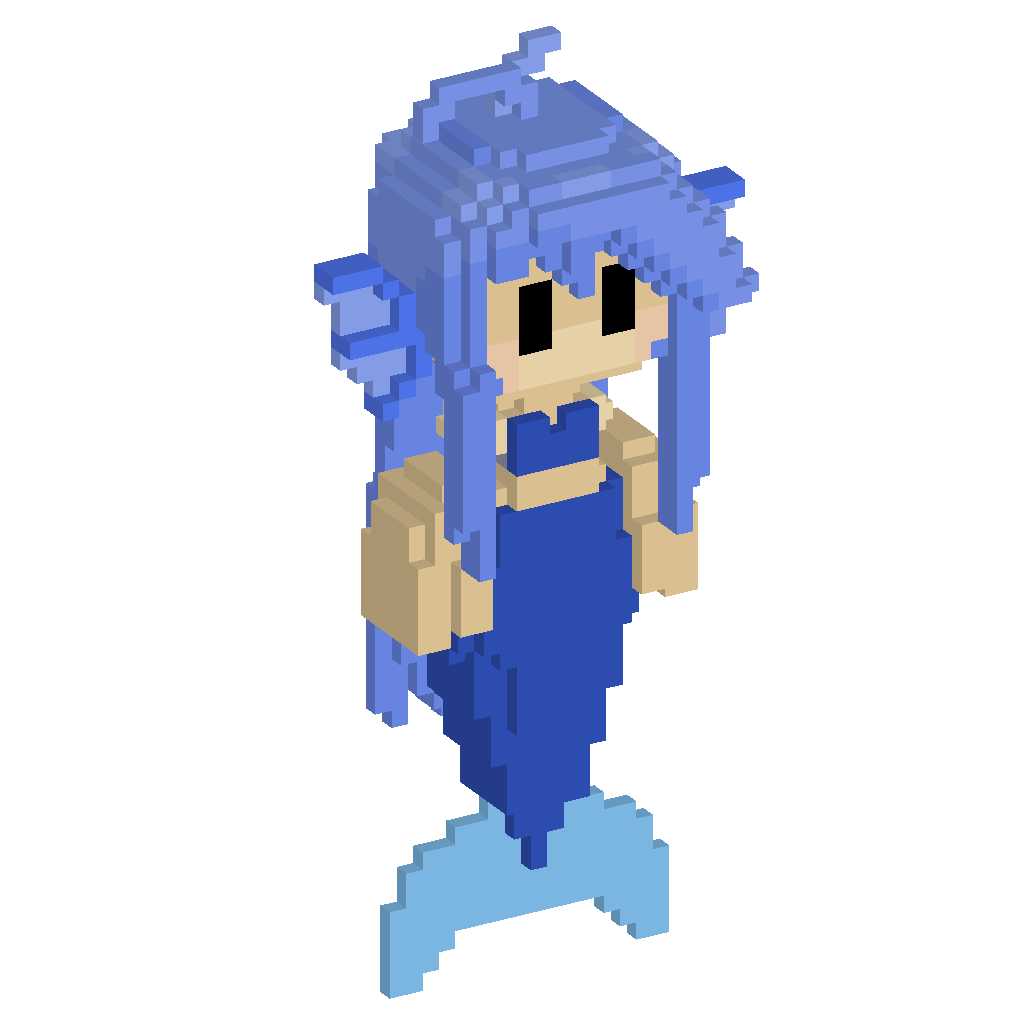 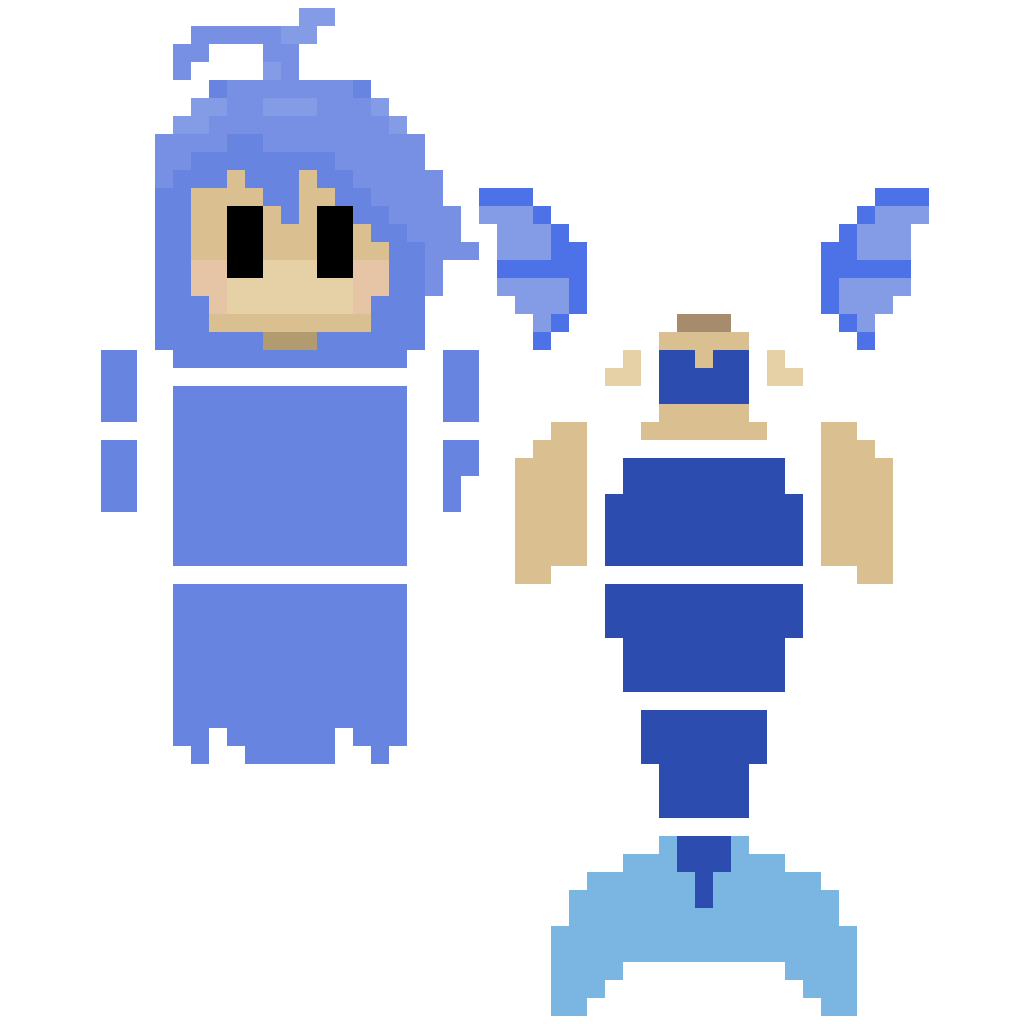 It’s Currently not fully made(as you can see)

some things have to changed like… color? (and some hair editing)

Also, Don’t worry about the Golem and the Harpy i’ll finish them first

Now… I Have a problem

Something that Only @Tom Has (wonder what that is…?)

Actually, Since i can’t watch the Streams anymore,

Someone link Tom to the Golem Creation post with the most impresive Animation ,
So they can… Hire… me…? (what?)

But still though, someone do it, i want to see how Tom will react to it since i don’t recall him watching any animations in the discourse.

Edit: also i worked on the Harpy today as well,
i made the Battle idle for the Harpy.

Edit 2 : The topics name was changed to… ‘That’ because it is what it is

Also i think a bit of variety would helper make the tail look better. the same counts for the back part of the hair.

It is a great model though

Yeah, i’ll be doing that when i get to the details, (with some model editing if it’s needed)

Can’t wait until I can start fishing these things and making some mermaid stew!

Then i’ll make her into a Really important Character so you can’t dare to @Newf !