Summary:
When selecting a building template and setting it down to be built, sometimes if i edit the building i get an error (which i can’t report right now but i’ll try to reproduce later but keep reading for the fault that happens after), sometimes i can click finish editing and remove the building, most of the time it stays though and so i go back in to editing and then undoing all my changes from the beginning of this placed building until it dissapears however the earlier error remains and i can’t build any more buildings and get the next error which repeats constantly, before i just moved the window but my system locked up.

Steps to reproduce:
Mainly editing existing templates by adding an extra block, i found that if i built the 1st floor (ground/ceiling only) and then erased a section (for some stairs for example) and then place the walls i might get my initial error but i’ll go back and try to play to get it and add it here.

Expected Results:
all reference to the errored building would be removed? 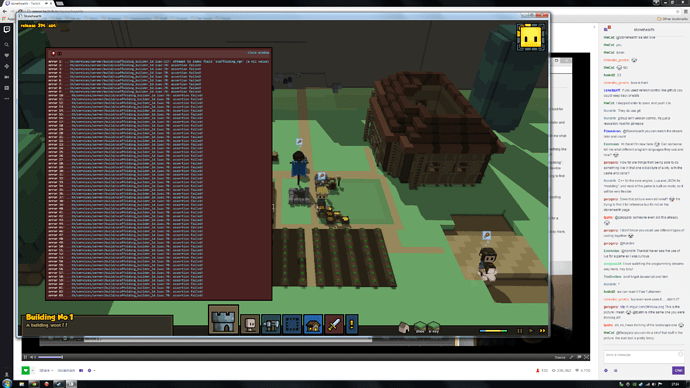 Notes:
-No save file (yet)
-Will try to reproduce initial bug

[Update]
I start a new game and chose to build my own house from scratch, i placed the ground floor 10x10, added walls and then the 1st floor, i went back and added a door and 3 windows, on the 1st floor ground/base blocks i cut out a 2x2 hole near a wall probably at x10,y10 to x11,y11, i then placed the 1st floors wall and got the error. 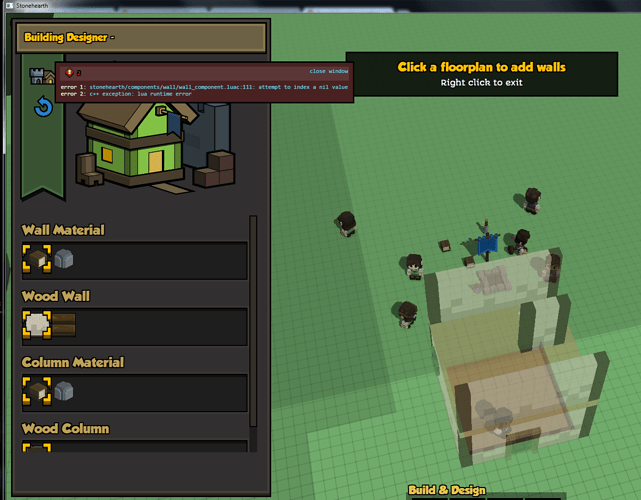 I then click undo until all the building bits have gone and closed the editor (im not sure if i just click on the building icon in the hotbar/menu to remove the ui rather than saying to remove this building) ,then I try to place a new template or build a building from the beginning and i get this error. 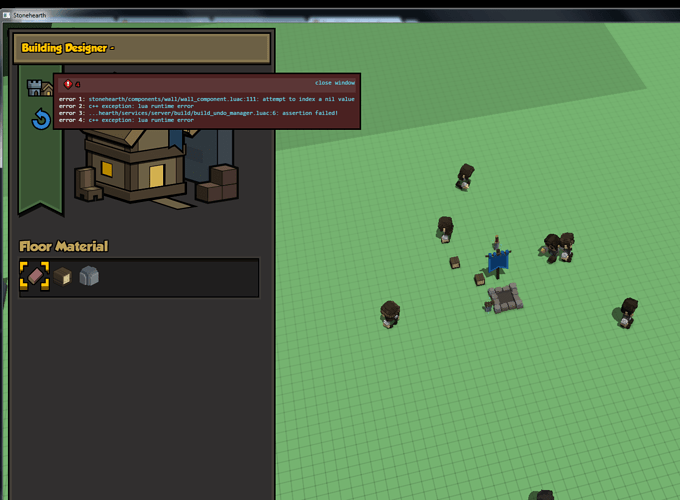 Thats it for the additional info right now though i think i get my 1st post’s bug when i achieve this after already having placed template building without editing them.

I was just about to create a save file to attach and my game is no longer running and i’m not sure why.

It’s worth noting as well that when my system locked up before (not on this release but for…in my mind the same fault) there was no log in my event viewer only that my machine had recovered.

…Going to attempt some more things.

Still getting the error in 2nd screenshot…

removing the building by clicking ‘Finished Editing’ and then ‘Remove’ and ‘Remove this building’ gives me the error in teh 2nd screenshot again.

i noticed that when i remove a 2x2 part from the 1st floor ground im using the erase tool from ground floor ui.

all was going much better this time when i avoided erasing parts of the ground so i think my initial scaffolding error maybe ok now however i just played a game and things were going well i had a few bugs (changing a mason to a worker when he still had a queue(?) and then tried to place a door on the 1st floor of a custom building and my game crashed to desktop.

Nothing in my event viewer for the application closing.

Anything else i can try?

This also occurs in the 32 bit version…

Thanks guys! I’ll look into it.

ps. is it normal to have 2 stonehearth.exe process running?

figured this might be useful too. i’ll stop now though.

ps. is it normal to have 2 stonehearth.exe process running?

Yes, that’s completely normal. One is the browser, FYI.

Ah ok cool, thanks for updating me again, hope things aren’t stressful there. Take your time