Berry bushes that will never be harvested

Somehow, the middle row berry bushes will never be harvested no matter how many times a command is dispatched to gather the berries. 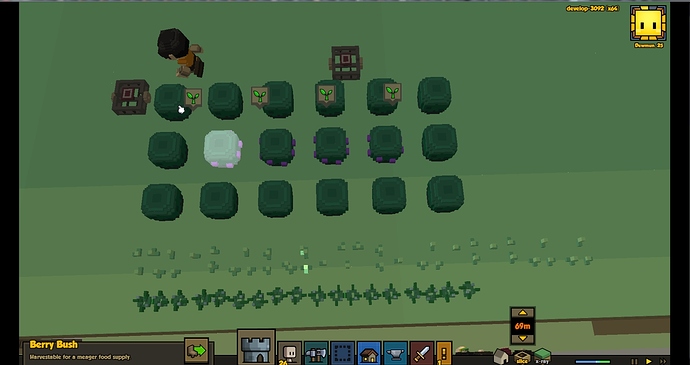 The Hearthlings probably can’t squeeze between the surrounding bushes to get to them. Try moving some so that there is a path.

you need to space them out a bit more, the hearthlings cannot get in between them is all.

nvm what they said above ^^

To be specific about the solution: the berry bush has a hitbox of 3x3x3 cubes, so even though when you place 2 beside each other it looks like there’s a gap between, as far as the game is concerned that “space” is still taken up by a solid berry bush.

You need to leave a full cube of space between the two hitboxes, or access to at least one side. So, if you want to have two berry bushes with a walking space between, you need to place their “centres”/trunks 5 blocks apart.

What I like to do is arrange my berry bushes in double rows, with enough space between that it looks like a path for walking along. Sometimes I’ll even put narrow roads in between, to create the effect of a vineyard/tiny orchard.

Thanks for the tip. I will give it a try.