i have 2 stone storage in my wallet.
but i cant place it. i dont found it when i want to set… 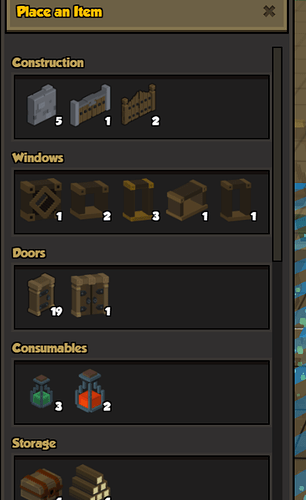 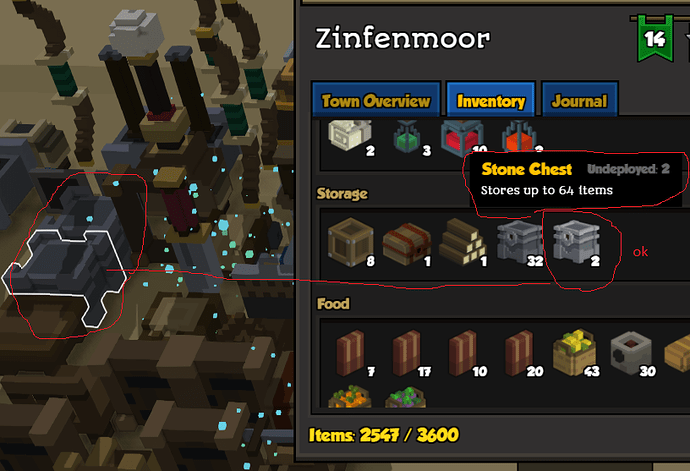 Do you still have the savefile for this, @artifus?

It seems to be caused by ghosts chests.

You already placed most of those stone chests, but they have not been placed yet (still in ghost form) so they appear as undeployed in the inventory, but you can’t place them again with the UI until they are placed and undeployed again.

If you build ladders to the yellow roof of the houses, the hearthlings will be able to place the chests and the count will be correct.

You have also a chest under a roof, with a ghost ladder that the hearthlings can’t place because it’s on top of another chest (which is 2 blocks tall, they can’t reach it).

Not sure where the remaining ghosts are, but they are probably unreachable too, so the hearthlings did not actually place them.

ok.
yes i placed 2 ladders and block i placer 4 of them.

And can you check the bug on carpenter the queue is bloqued :
trying to make the carpenter sign but need the sign placed just before

It’s… not broken, I’d like to say. We don’t have the option for when a crafter is collecting the ingredients, and one of them becomes unavailable, to stop crafting that recipe and start with another one. For the moment, you would need to delete the stuck order and reissue it (or get the missing ingredient if possible) in order for the crafter to keep working.

There’s a different bug related to this, that we’ve prioritized for the next alpha, so when it gets fixed I’ll make sure devs also fix this, since many of you are complaining about it lately.

Your specific case is very interesting, because there’s no way to fix it unless you delete the stuck order. So thanks for the reminder.

ok but i have this more often now i have to wait
but i dont have have this issue in alpha 18 it is new for me.