So, as you guys have probably guessed, I’ve discontinued work on the A14 version of Lumineux…

…will be even more ambitious than my A14 version, and will generally take a lot longer to plan out, but (I think) it will be well worth the wait.

Yeah, well, I decided to restart on Hard mode on A16

so there goes all the A15 progress 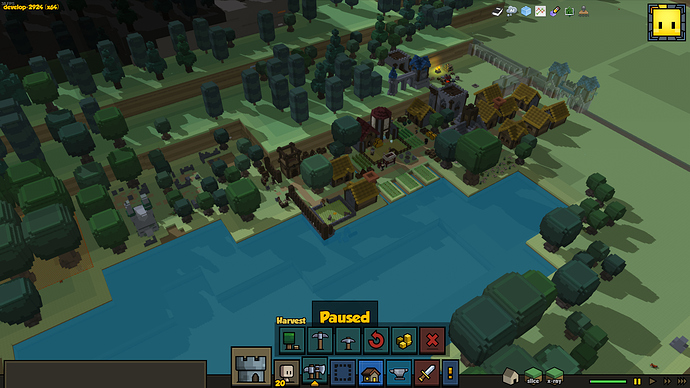 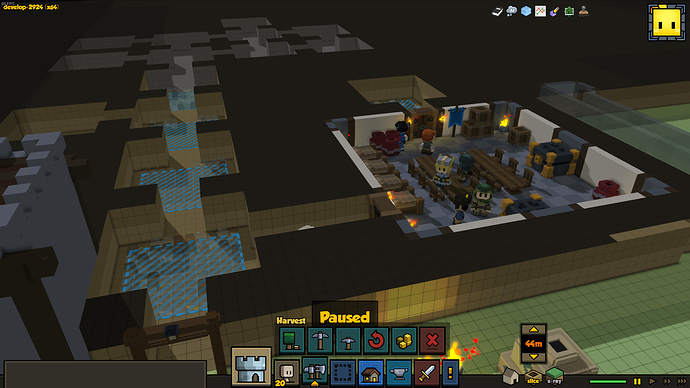 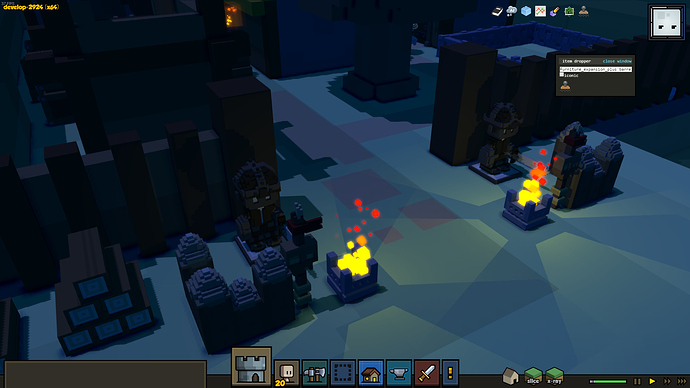 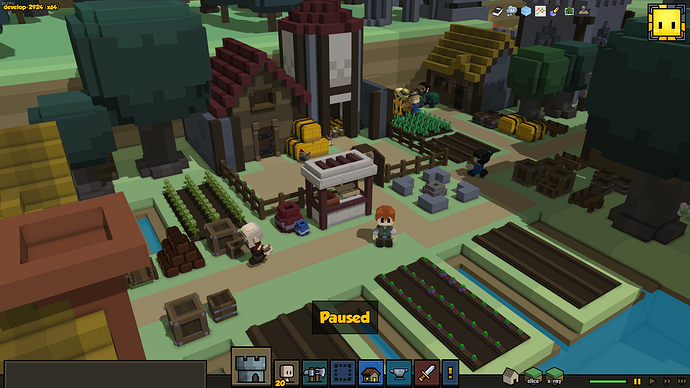 oh man, so excited for this, the first one was absolutely stunning, so i cant wait to see what you do with this one!

Looks like you really took to heart giving your self specific work spaces - looking at it though, wouldn’t the military be next to the keep to garrison it - as where the crafters works would be closer to the consumers (Residential and slums) but that’s just a pondering, should be wonderful whatever you go with.

A lot of my progress is on hold until we get a build with rangers - and a few more systems, I’ll expand what I’ve got, learn new styles but I don’t look to expand my hold of the dunes much.

PS, Alpha 15 should be out soon, as I think the lasted test batch is near its last cycle of updates, or so they stated.

Well, the Military District this way is closest to the entrances of the town, and the keep might have it’s own separate garrison from the town guard.

Also, I accidentally left my computer on without pausing the game, so all my hearthlings died ;_; I have to wait long enough for my town to repopulate.

Not good man! Good luck on that - I’d vote to enslave the goblins and wolves, though. 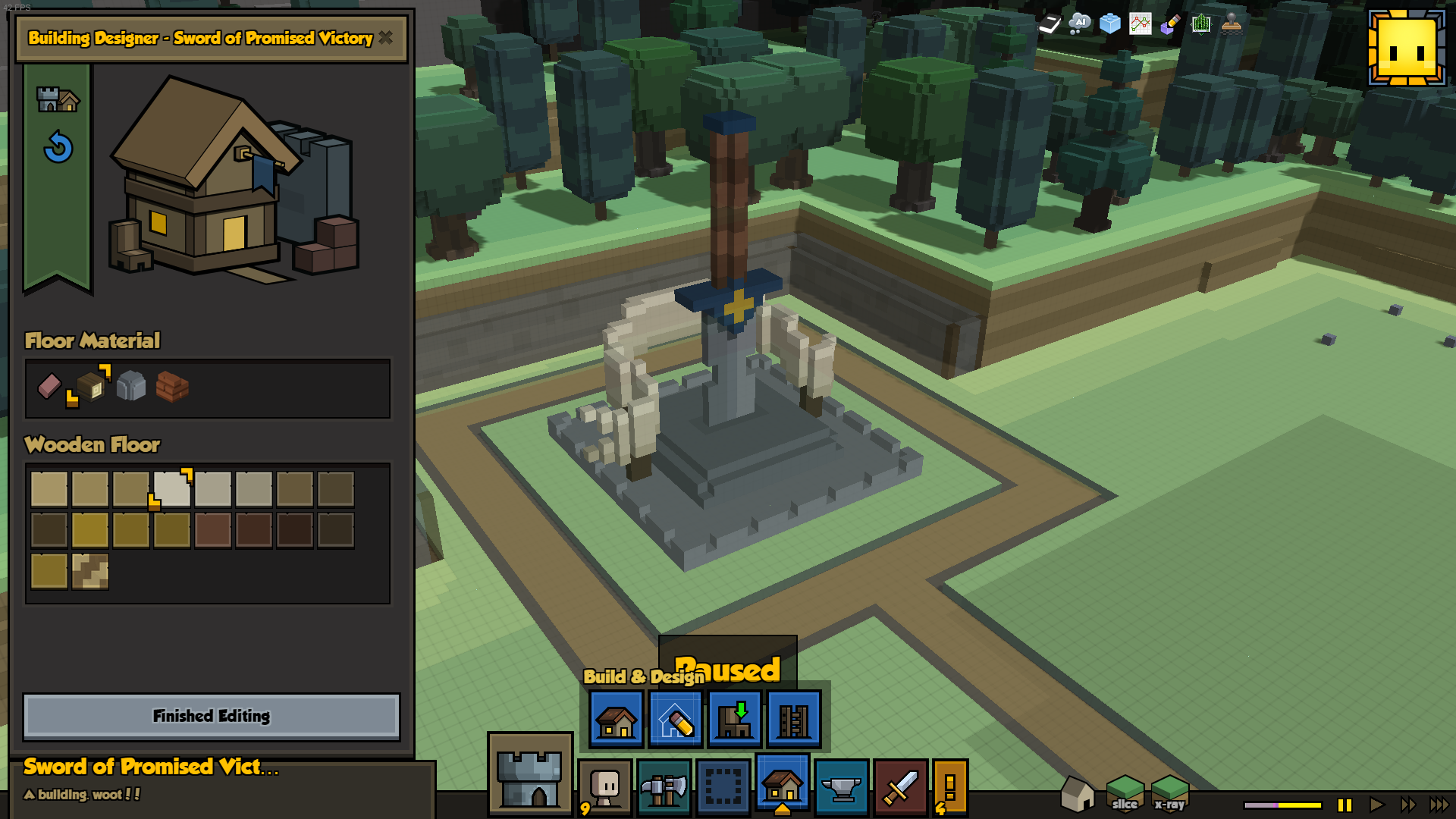 Not a lot of overall progress, but I’ll see what I can get done over break. 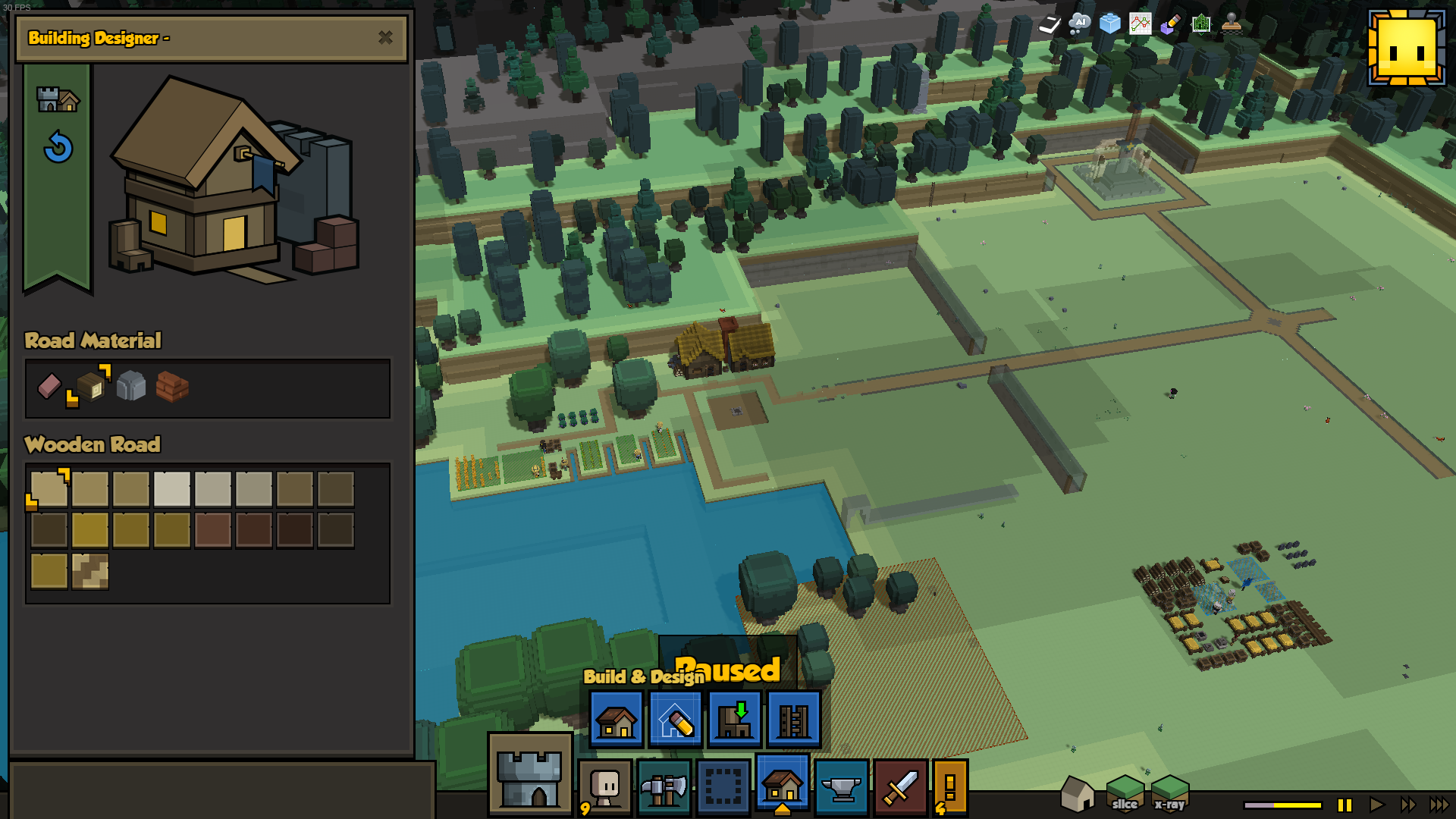 If someone catches the reference, +1 internet point

What’s that in your upper mid-righthand corner? With the icons?

And is the sword the Master Sword from LoZ:A Link To The Past? 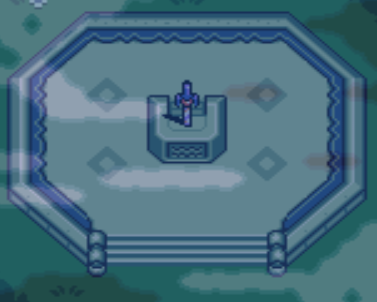 The icons are the debug tools. they allow me to cheat to a certain extent when I’m feeling really impatient xD

The icons are the debug tools. they allow me to cheat to a certain extent when I’m feeling really impatient xD

@ShoGraffiti, while they can allow you to “cheat”, their main function is to help the devs and mod creators test things more quickly in the game. Let me explain what each one does:

Built a church in the slums (FFVII anyone?). Based it off of the crypt, but tried to make it a wooden church. The one in the city will be made of stone. 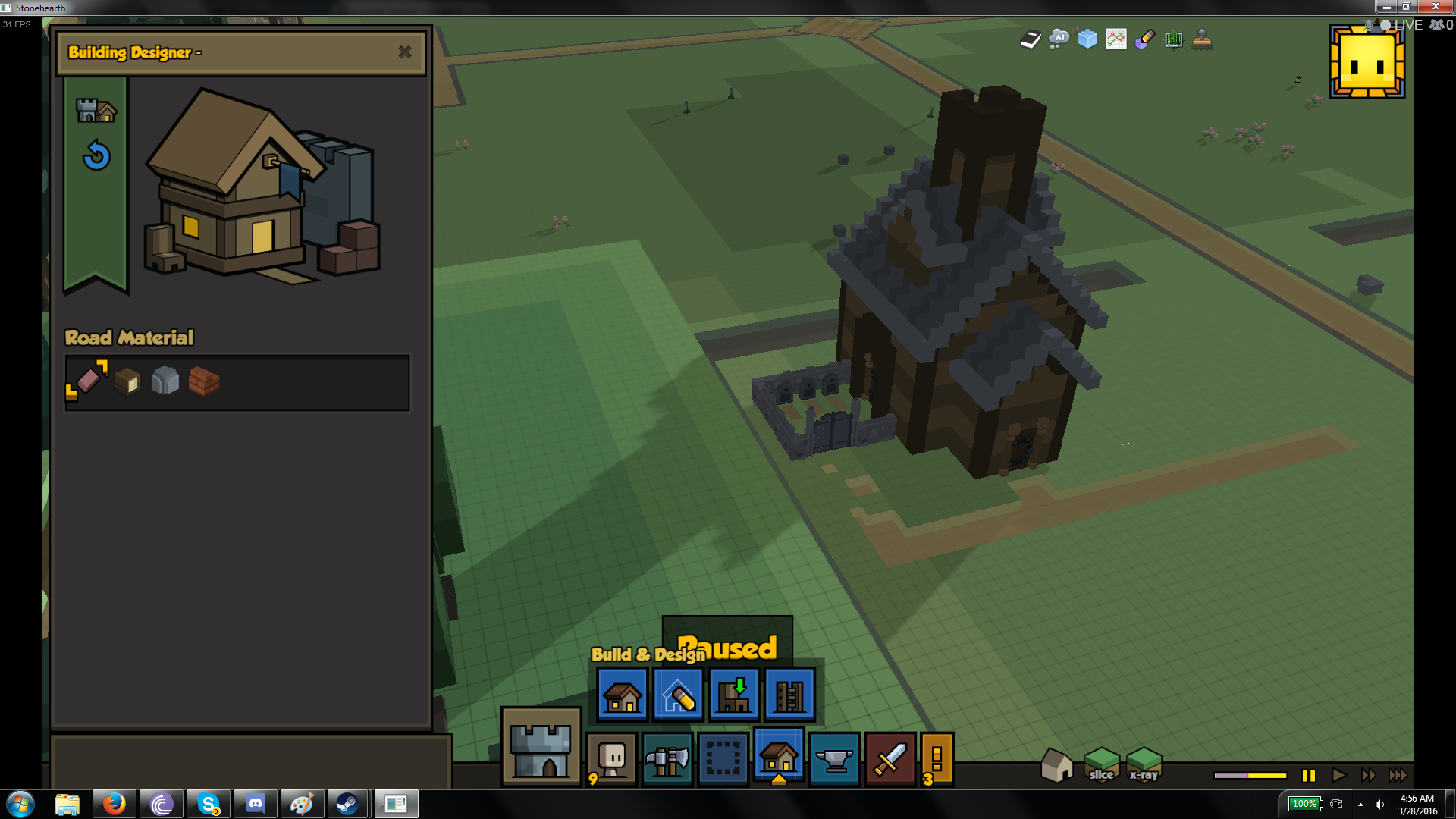 Slums is nearing completion, but I don’t know what to add in as filler for all that empty space apart from more crates and stalls :T 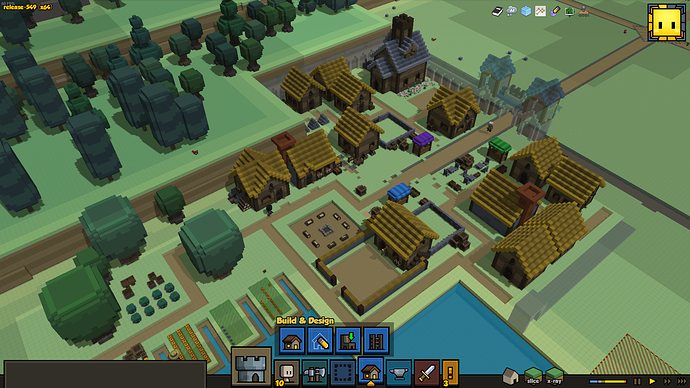 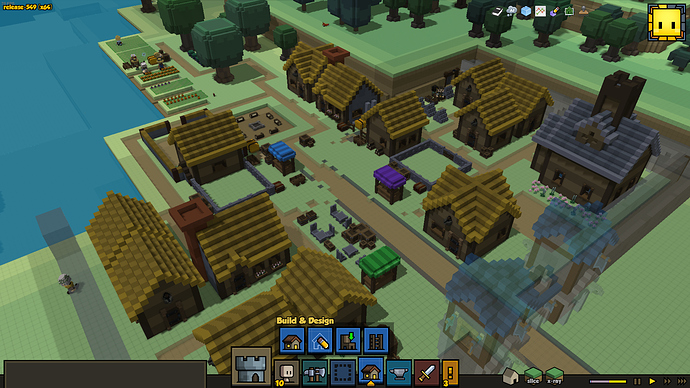 Also, I’m not sure how I feel about the stone dining area.
Feedback would be appreciated at this point. I really need suggestions here.

Quick edit: it appears communism is the solution to the blank space. 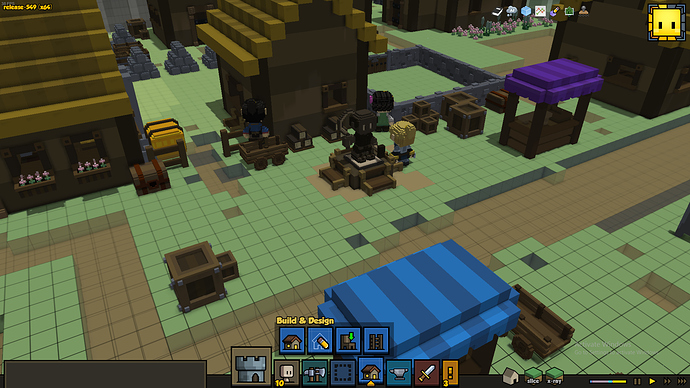 I suggest you make the green into dirt, as green reminds me of a more wealthy area.
Then of course People are poor little guys that need to feed themself, so give them some sheeps and poyos.

Well, I put my foot down on some basic needs, such as a military. I spent a while not building but rather getting a defense force up and running. Got a bunch (5) of town watchmen and a “knight”. Never again do I have to cower in fear.

Before this I sometimes had to pause the game and console delete a bunch of tough mobs and every time I did that I hated myself more. So no more console scumming mobs. 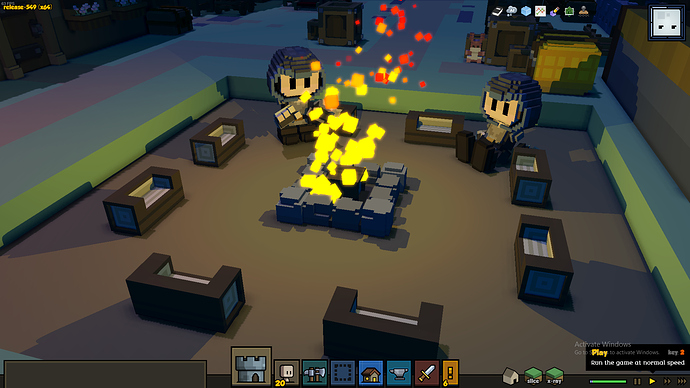 When the knight and archer classes actually do come out, I plan on having a comp of 5 footmen (equipped as pictured, fitting for town watchmen) 2 archers and 3 knights, which together will be 20% of the max population.

As the lower class section is mostly finished, I started on the defenses and walls of the town. 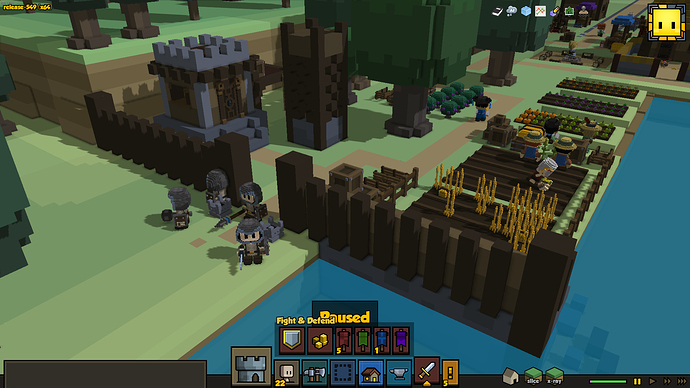 A simple palisade and small garrison for basic defense of the slums. 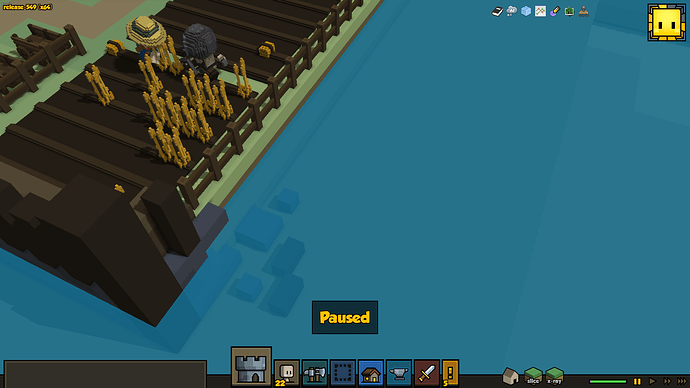 A broken off section from long past. 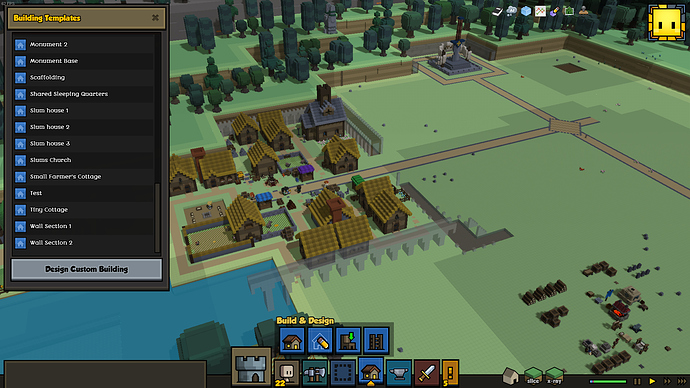 Projected plans for the stone wall. 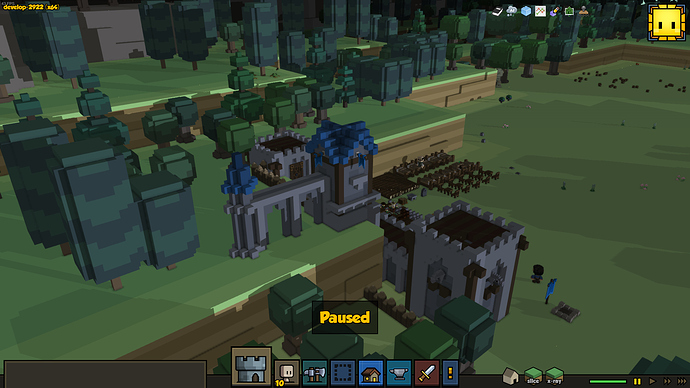 However much I want to say that I wanted another fresh start in layout it was really just an excuse to start the game on Hard mode.

The new farm, with a member of the town guard on patrol. 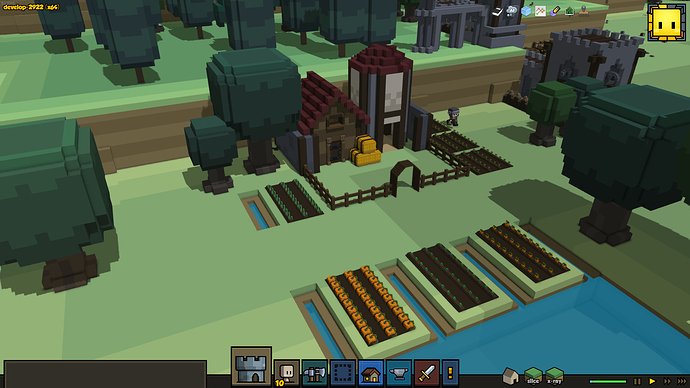 Ruins outside the lower class district 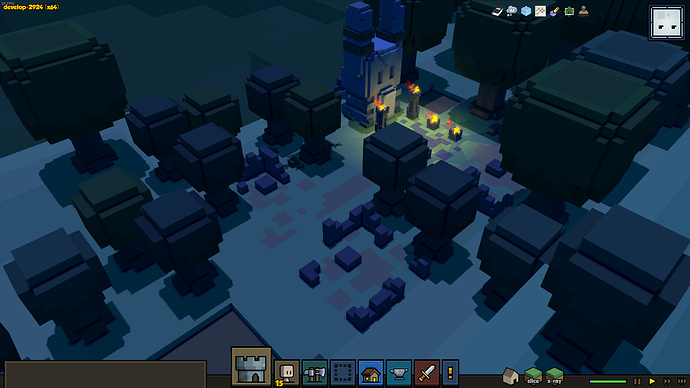 The A16 reboot’s version of the slums are coming close to completion. The semi-walled portion might be a more middle-class area than the rest of the slums, but first I have to move all my old stuff out of there.

Unfortunately, after that, I’ll have to work on those tedious town walls next… 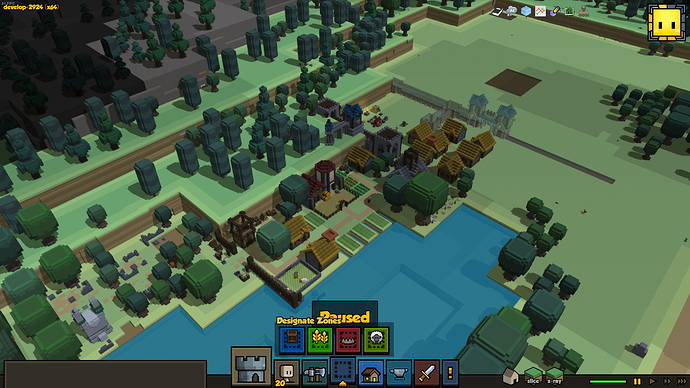 In retrospect, the A15 slums were more haphazard, spaced out, and colorful, and therefore more Hearthstone-y, however I felt the farming emphasis of the slums is better brought out with the A16’s farm rather than the A15 version. Also, I think the A16 slums feels more crowded, which brings out the whole “slum” look. Which version did you prefer?

EDIT: After some decoration around the farm ;D

Because of the massive amount of campaign and combat updates, I’d like to suspend work on Lumineux until everything dies down a bit. I want to be able to experience all the new content, so In the somewhat near future of Alpha 17 I’ll restart Lumineux in earnest. Currently there’s a lot of stuff that Radiant’s been pushing out (which is great in all seriousness) that I just wouldn’t be able to experience if I were to keep working on my savefile, so I’d once again like to start a new one in order to enjoy the updates fully. At the rate they’re working at, I’d have waaay too many restarts for anyone to take me seriously anymore, so I’ll wait until the updates (at least for the campaign) die down and stabilize a little bit .

TL;DR: I want to restart to try out the new stuff, but with A16’s update rate I think it’s better off to restart A17 when campaign-heavy updates are over.