So the spiritual successor to Banjo-Kazooie has finally launched its Kickstarter and it’s going pretty well.

Funded within the first 40 minutes, and as you can see it’s generating a hell of a lot of backers.

I must admit I’m pretty stoked for this, I do miss me some Banjo platforming action.

I just got my payment for this month… GARH. @Geoffers747 why you do this to me?

Also it looks like they are going to need to exapnd their stretch goal.

So it is already halfway to the last stretch goal. That is quite extreme and we are not even through the first 2 days rush.

Should be a great game, nice to see a platformer being developed. loved the banjo kazooie and tooie. Even liked nuts and bolts.

At least it’s not @SteveAdamo this time.

the moderators have decided to work together to empty our wallets

THE APOCALYPSE IS UPON US!!! RUN FOR YOUR WORTHLESS LIVES!!!

In light of what may happen in a few days, and almost certainly by the end: What happens on Kickstarter after a project passes all of its stretch goals? Can they make more?

Most of the projects i have known made up the stretch goals on the run. Though the succefull ones had their stretch goals ready from the start.

They have just completely smashed their funding goals so far. Maybe they can actually get £1,000,000 in 24 hours? Who knows? I guess the love and nostalgia for Banjo is strong.

Also sorry guys, couldn’t let @Steveadamo take all the Kickstarter love, he thrives on it, it feeds his ego. It’s kinda weird really.

They have been going for what 2.5 hours? 3 hours? and they already reached 600k

I would say 1 miillion day 1 sounds quite reasonable. 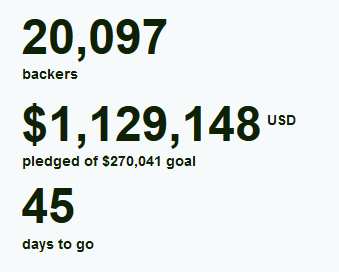 I hope our poor, beloved Radiant isn’t feeling too jealous.

Which is Yooka and which is Laylee? xD

So they actually did the 1 million on day one? Oh god.

Oh they did not… Damn only in USD.

And wow, they broke a million pounds over last night (for me)! Roughly, that’s around $1,500,000. And we’ve already hit the console stretch goal, so that means we’ll essentially be getting that grand return of Rare to Nintendo! Good times… I missed Banjo Kazooie and Donkey Kong 64.

(whoops, just saw @coasterspaul’s message above about the financial update.)

And that is before weeven reach the end growth spurt.