We where not the first inhabitants

After days of digging and working the citizens of lord crap town finally found it. Between the rubble they found proof of an anchient race. The leader declared that this ancient race were the Dev’s. The Dev’s were a powerfull race with incredible building capability’s. Among the finds were some detailed plans for a massive structure, but somehow it seems there was something missing. The plans were not complete. No matter how long they searched there were no more finds.

A few weeks have passed and the citizens kept working and studying the acient plans. The scholars found out that de plans were complete, just not in a way they had ever expected. The Scholars believed the acient dev’s race used these plans to build a special building. The scholars decided to get all the citizens to gather in order to build the structure and have it done in time for the birthday off there leader.

Happy b-day to the leader of Lord crap town. May he sit comfortable on his new throne.

Build is buildable bij the heartlings but will take massive amount of time. If this post hits 25 likes i will upload the template of it 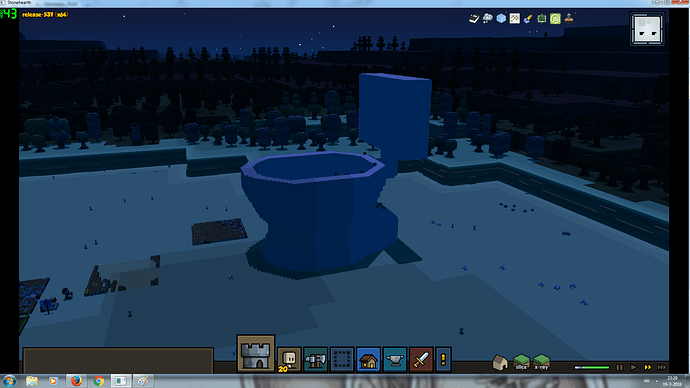 Did you just forget to add the flush?!

no its a big hole in the ground, perfect for furtilisation

How do you get this tool bar at the top?

This tool bar is the debug tools

keep the likes coming, already very happy with the number so far. The toilet template will be here soon