Please be aware that the mod is a spoiler on features yet-to-come and as such is based on code that may change from one update to the next. Enjoy at your own risk!

Sweet lol, nice work. How hard was this overall to make?

Holy *#£@. That’s pretty awesome work, especially given that Tom indicated they were having a lot of difficulties, and especially especially since you’re just one guy without the backup of a team of 6.

That’s some really fancy work!
keep it up!

@BrianNZ
Tom sed if i remember… “if a you manage to get the water doen, we should be hiring you” or… something like that,
in a pretty skeptical way like he didn’t think that anyone would make it Actually happen

witch leads to the Question, Will Tom ‘Actually’ hire him?

But who knows, maybe Tom & co will really like what they see and will incorporate some of @chessmaster42 's stuff. (Or maybe they’re actually far further ahead than this; who knows)

Great work! I’m eager to take a look at your code and see what you had to do to make this work.
In the meantime, a screenshot doesn’t quite do it justice.

[Edit: While anyone can still run this mod, in an effort to respect @Tom’s request that we restrain ourselves from exposing in-development features, I’ve removed this GIF]

OP, this is seriously good!

Back when Don’t Starve was in development I was a forum moderator (and prolific mod maker) and quite often someone would come up with a mod so good that the devs (getting permission) would fold it into the game proper. This appears to be such a mod. Certainly, they might collaborate with you and have your name in the credits somewhere.

@micheal_handy76_mh This mod is just asking you to make Pirates Bay again!

@chessmaster42 How much of this did you write yourself? From looking through your code and what’s available currently in the stonehearth mod…it seems like you wrote quite a bit.

All I could find that already existed were a couple components, the renderer (which you seem to have changed), and the hydrology services. I couldn’t find springs or sinkholes so those seem to be your own invention.

Jesus, if this is a mod made in 2 days, what would happen if i was make in more time with more help?

I … ughhh… fumbles for the correct words to use in reply

paging @sdee! you have got to take a look at this Stephanie…

wow This is awesome!

This is ridiculously great work. Nice job! I hope that this can help Team Radiant out in some shape or form.

Lol, I was attempting again with this build. Was mining out a big section to get it ready was going to build a big build with a flat blue roof to stand in as water. But now i see this i might just DLed this to attempt it.

Wow! Not only did you single-handedly write a whole new feature into the game, but you even made it… colorful!!!

wow… my ind has just been blown!

a quite well deserved title!

This raises the question: is there a nicer way to dig up single blocks, other than building and cancelling streets/floors? Because obviously this is completely required now! ^^

I tired to do this

Added the line “enable_debug_keys” : true to my user but now the game crashes

@chessmaster42 first of all great job, second @tom promised that he would give “the person who would finish the water code a job” i’m pretty sure he was joking, but still you certainly did what he said. Get ready to fly to California

I want to say great job also, in honor of you for Pirates Bay, I will build a Statue of Chessmaster42 pouring water from a bucket 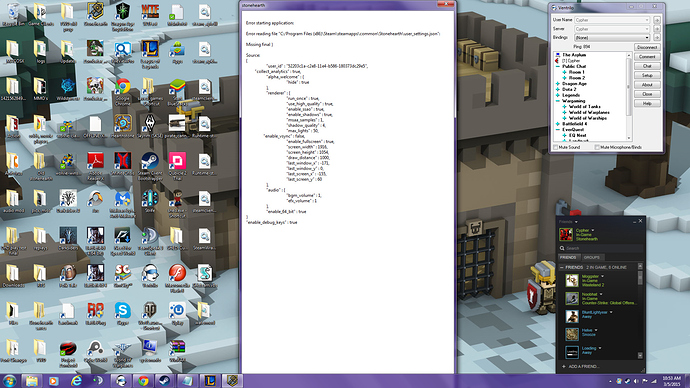