Thanks for the ideas,
ive added most of them to the planned list

but the sword that gives light might be tricky. i dontknow if i can maipulate light that way. but ill keep it in mind.

Also i havent added the crossbow shield, beazue i want to do decorations first. but ill might make some weapons and shields later when the rest is done. so again ill keep it in mind.

My only suggestion would be to make the ballista string using effects… though it might be difficult to do with particles – maybe we’ll get a better alternative when ranged combat is released!

Also hope water becomes more finalized by alpha 11 so we can experiment with liquid sources. In your case you could have your oil pots ‘spawn’ hot oil, or you can make tar flow evenly into trenches.

My only suggestion would be to make the ballista string using effects… though it might be difficult to do with particles – maybe we’ll get a better alternative when ranged combat is released!

yeah i will wait till ranged combat is in the game before atemting this.

Also hope water becomes more finalized by alpha 11 so we can experiment with liquid sources. In your case you could have your oil pots ‘spawn’ hot oil, or you can make tar flow evenly into trenches.

this will be a really cool idea, my only hope is that a source doesnt need to be in contact with a drain.but that i can make it spawn a certain amount of liquid. and then have an animation of the pot dropping it into a drain below.

Does the balista or will be available to be used, like in fights and that stuff?

Does the balista or will be available to be used, like in fights and that stuff?

these are decorations, they have no other use.

Well i am wondering if the Balista shoots or is it just a decoration? It fits pretty good on my tower.

What about asking that question in the mod thread? Instead of asking about it in a new topic.

Tagging @SteveAdamo @Geoffers747 for a merge. 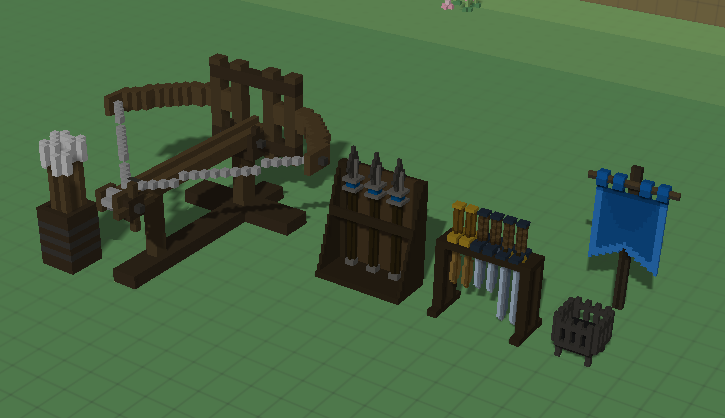 This mod is down for now, it is being changed into a different mod that will incorporate more than just decorations, I will release the mod when it is at level i find acceptable. For now i have taken down the download link as to not confuse anyone. ...

Thx i was waiting for that link

Tagging @SteveAdamo @Geoffers747 for a merge.

though im not @SteveAdamo or @Geoffers747, i have merged the threads for you.

Wow you have amazing powers

well i am a Senior Support Crab, so having amazing powers is mandatory

Does this actually work… Or just decoration?

Awesome stuff, how did i miss this??, would you consider adding it to PraiseDB?

well im working on a mod and it will include all these decoration pieces (and also 7 new kingdoms, 21+ new weapons, 14+ armor sets, 100+ decoration, 14+ new crops, 4+ traps & turrets and a whole lot more) but unfortunately i cant give an eta yet, because of work and other things that consume my time. I might release a WIP version in the future, but I need to learn how to animate first otherwise the ballista and cannons(yes im made cannons) will just look silly.

Gasp!
Did someone say…, Animation?!

Ballista Mod! Hi there! Symbol Here it’s been a while since i updated the Mythical creatures mod (a while being almost two years) believe me, i’m working on it, for the last couple of workings, i worked mostly on making models and animations, with quite an amount of planning on gameplay and story(a lot of story) recently though, i was a little exhausted, so I was taking a little break; I started playing the game again for some more inspiration and feel of what will work, and I figured I want…

Hi There! Symbol Here i haven’t posted anything recently besides replies and stuff like that and i always like some good animation practice, so i decided to make a post dedicated to any animations i make i considered just posting it on my art post, but i want that place to be for paintings and renders, rather than pure animation works, so here’s the post if it seems inappropriate to make a new topic for this, let me know, or maybe merge it for me [mermaid animations practice] you’ve seen …

Let me know if you need any help with that

thx, ill contact you once I start on animations and i need help. right now im still making other assets for my mod, but thx in advance

Hey, I really love what you’re going but sadly the link seems to have broken. When I click on it, it says the dropbox folder is empty.

I have taken the link down, sorry if i caused any confusion. The mod is outdated and i have put up some text explaining it to future ppl what is up.
I have also removed the downloadlink from the post itself, like you said it would lead to an empty folder. But do not worry these items will return in a new mod, with much much more.

Ah, thanks. Can’t wait for your new mod!