I’m in a new game for the update, just defeated mountain which slaughtered basically my whole town because my blacksmith isn’t able to make a carpenter yet and saws aren’t for sale…I killed mountain first, then the chief but the chief tells mountain to fight on. The second the quest completed I now have the shadowed figure who’s going to tell me about the wind chimes. I’ve been collecting broken flutes for a while now.

I’m playing RC in the desert.

When the Ogo arc starts the windchime dialog should happen more than 3 days earlier before Ogo attacks.
Just to confirm:

It definitely came later, I had 2 quest dialogues show up one after another, one was a chief with officious smirk which I was ignoring cause my town wasn’t ready, the next was war horns or something, can’t quite recall.

I do have a save file…but when I reload it and open the smirk dialogue it does load the shadowy figure next…when I reload and ignore it I get the two quest dialogues…here’s a screeny (once defeated the shadow figure will trigger, then it will congratulate you basically same day). Would you still like the save file? If so please let me know how to give it to you. 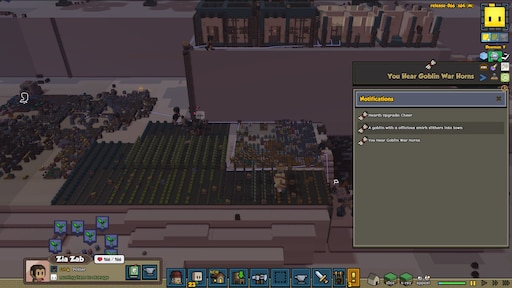 The goblin with an officious smirk is the one that tells you that Ogo will come, it’s only a dialog. After it, there’s a delay that will spawn the windchime dialog, as part of the same quest branch.

In a parallel quest branch, Ogo will eventually come.

We could make it so that all this is linear, but allegedly you read this goblin dialog, after a day or so get the windchime recipe, and after several days Ogo comes. There are other ways to ignore quest dialogs already (exploits) so I don’t think we’ll change this quest design (@Rabid_Llama / @max99x).

Marking as not a bug for the time being. Thanks for reporting anyway!

Well it’s definitely not triggering if I ignore the officious smirk dialogue for that whole time.

That’s the exploit I’m mentioning, which is not what’s reported in the OP. It’s not an incorrect quest being triggered (as in, something went wrong with the timers, which we’re getting in multiplayer lately for example), because in this case it was being ignored on purpose, which can be done with literally any dialog in the game.

I’ve pinged our game designer and a dev, so that they can take your opinions into account and decide if we want to change the quest.

A possible solution would be to make a third quest branch, so that the windchime dialog is triggered separately, but the context of the quest and the storytelling would likely suffer. Getting the windchimes is optional, and definitely harder with RC (RC is expected to be harder to play).

Edit: you’ve convinced me. Let’s change this topic to reflect the exploit instead. I can’t find any specific thread about it, even though it’s been mentioned many times.

We might do something about this “ignore” exploit eventually for any of the quests, but it’s a general UX problem that requires to inform the player in an appropiate way, if we were to continue the dialogs by force or something, so it’s not trivial to fix. This exploit allows you to ignore goblin requests indefinitely, or at least to prepare your military before letting them attack you, for example, so it has both advantages and disadvantages at the moment.

From my perspective it’s pretty linear which quests are triggered so to me it does look like the wrong quest was triggered when the first step wasn’t opened and triggered by me but I completely understand your code perspective too ha ha. RC is definitely harder, right after I killed mountain and almost lost my entire town I got the ability to make a saw LOL. I’d play AC but they can’t make teapots and I just can’t deal with that haha.

Perhaps these notifications should be treated not as notifications but as scrolls that open up on the screen in front of you, no way to ignore it then. You can have the game pause to read it and a confirm button to return to gameplay.

You could even have the races animal deliver it like a little cutscene overlaid over your camera view [while paused]…like have a little bird fly in or the fox run in and drop it…could even do that with the other quests too…Would be super cool to see the character who asks for the hearth banner and other choices to walk over and hold up a scroll. You could use the sprites in the world too if no cutscenes and just have the camera zoom and focus on them and they can do their action…then you can also show the chief and his army on screen pounding their chests or looking menacing, etc. Just maybe return the camera to where it was when done lol.

We could force it, and eliminate the exploit, but I’d rather keep the exploit and give players more power over choosing when to trigger quests, even if it’s not super realistic or can lead to odd edge cases like this.

If you use this exploit then, can the shadow figure not trigger and be marked as skipped?

I think this would only be a surprise for a first time player, if they skip that dialog. Experienced players might already know that that goblin is Ogo’s bannerman, just announcing that he will come for your shinies.