Summary:
Every so often, when one of my hearthlings gets incapacitated during a goblin raid or other attack and I have another hearthling move them to a bed to recuperate, they’ll lie there and recover… And recover…
And then not get back up. Ever. They’ll lie there and starve to death. Resetting their position doesn’t work, and I don’t know what’s causing this.
Steps to reproduce:

Expected Results:
Usually I’d expect a hearthling to recover and then go about their tasks.
Actual Results:
They laid there and starved back into incapacitation.
Notes:
Unsure what’s causing this, Not sure what to check or what to do. All attempts to reset the model resulted in the hearthling lying on the ground instead of the bed, unable to move or act.
Attachments: 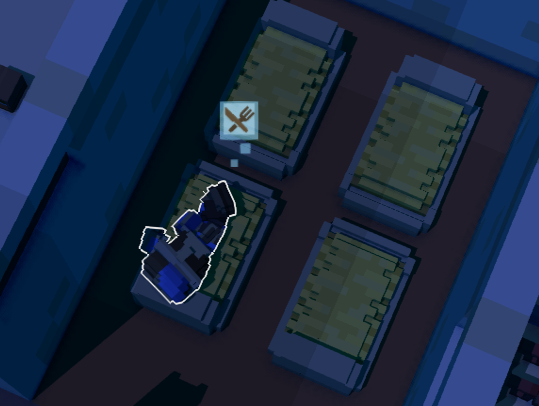 Your hearthling is starving.
This is a known, more or less, bug.

FWIW, I was able to clear this bug by saving and loading

@Retr0VIRUSS, did you start that savefile on the previous game version, or on 701?
Does the footman get up and go to eat if you save and reload?

Started new game on 701, he doesn’t get up if i save and reload the game. happened on multiple files on 701.

The screenshot was taken after he finished recuperating. I’m aware he’s starving, but he isn’t incapacitated anymore.
The bug is that he just won’t get up, even if he is no longer low on health or is starving. I’ll try again to see if another reload will get him to move.

Second restart, managed to correct bug temporarily, but then it happened again with a different hearthling. will just continue reloading after the bug happens.

I am also having this problem right now, or a very similar problem. I have had one of my archers killed in battle where he was then taken to a bed to recover, however weeks (in-game) have past and he is still in bed recuperating his health has not reneged one bit. I have saved and restarted(same point), restarted on a auto-save where he was just taken out bout nothing has worked. Any one know what i can do about it?

Welcome to the forum, @ChI11Ed_PyThON

Could you upload that savefile?

how would i do that?

Like so? aha im not the best with computers

Yes, that worked, thank you

Yay. Thank you for helping

Was he really in bed? In the savefile he’s on the ground. did you undeploy the bed?

Undeploy? How do you mean?

Yeah, he’s not exactly on the bed in that screenshot

But there he has the blue heart, he should be recovering just fine.