I had one of my Shepard glitch and stop moving completely, not even an idle animation, i restarted the game and she starts moving but very slowly. Afterwards i try to change her job to a trapper and then a continuous amount of shepard staves start spawning around her, when a worker would move one another would take its place.

Has anyone else had this same glitch happen to them?

Nope, but my workers constantly idle, when it’s not Sean it’s Irving or Leah or some other badass worker. Or the carpenter or the mason or just any kind of worker will idle. Then when I change their jobs, the tool goes missing. So, in a way related and in a way… eh.

not that exact problem. I have had error with the shepard and a local index ‘entity’. It pops up once a day.

Had this exact problem. I reloaded an earlier save and the staffs disappear the second time but no he wont move at all or eat or jack shit so yeah this is for sure a problem

Playing alpha_10_5-10 (x64)
This happened to me as well. I tried to resolve it by demoting a footman to be a worker, then telling the carpenter to switch to be a footman. When the carpenter picked up the sword, however, it generated hundreds of errors and a square (5x5) of saws appeared around her. The saws got brighter and brighter (I assume because multiple saws were being generated in the same place).
I have several screenshots, but sadly I just created this account, and it will not let me upload images.
EDIT: Here is a link to the screenshots. (Thanks Dracorexion!) 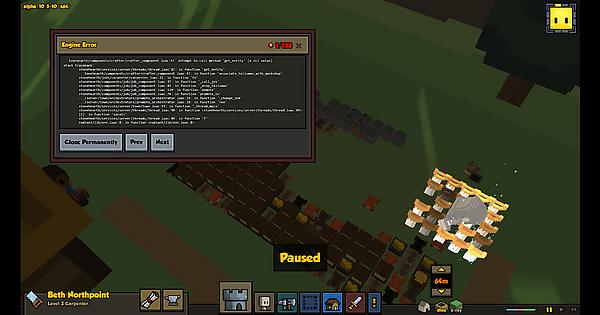 Upload the screenshots to imgur and link them here. An admin can embed them for you.