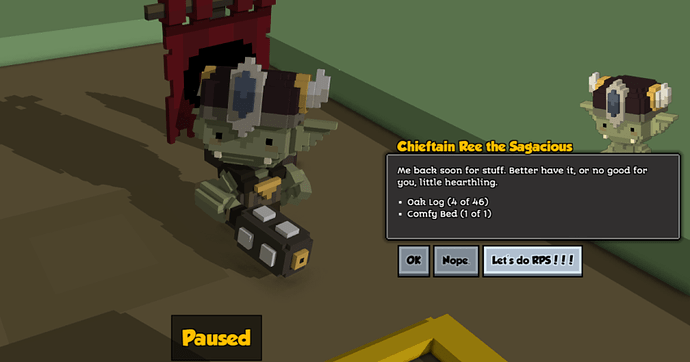 I cant help but think this is an April fools joke. As cute as it is

Seems legit! Can’t wait to challenge them goblins to a non-violent game of RPS!

What a nice cool things you make !

Awsome!!! HYPEHYPE!!! Finally a way to show off my advanced pro-player RPS Skills!

Am I the only one who thinks the requirements for the scissors are pretty high? Anyway, @sdee Its that time of year we need to talk about the blackberry app, I’ve had my blackberry phone waiting 2 entire years now, Any good news?!

They keep changing their API. It’s very frustrating. We’ve dedicated all of @Doug’s time to it; but even so, it’s slow going.

Thanks for the update, I can sleep peacefully knowing its not forgotten, I shall check up on the progress next year, I know its going to be worth the wait try’s to reassure self

When this beautifull Alpha 16 coming ?

@sdee, will the RPS mechanics make it into the F2P HOBA, or has work on that project been canceled?

When will the day come in which people will see April 1st as just another day on the calender instead of some immature holiday.

I’m sorry, you seem to be confused. This isn’t an immature holiday. This is Stonehearth: RPS.

It’s an obvious April Fools joke. “Early DT”? It’s friday…If this was real they could have waited until not April 1st to do this post.

I’m sorry, you seem to be confused. This isn’t an immature holiday. This is Stonehearth: RPS.

Fair .enough, I suppose. Thankfully, it’s just one silly/fun day a year. I prefer April fools to Valentine’s day any year though!

F2P HOBA, or has work on that project been canceled?

With RIOT acquiring them, I can’t see any reason why the HOBA wouldn’t be under way anymore.

Glad to see no riots are taking place (Insert bad RIOT Games pun here). It looks like we were able to stop @sdee and the rest of Team Radiant this time around!
We have achieved victory!
Begins cheering and running in circles
Trips
Ouch…

Can I say this is as good as, Lingering In Eternal Subterfuge aka L.I.E.S. Keep up the good work