I noticed this whilst building a simple house in d1633, whilst fast forwarded. Note the workers on the inside walking up invisible scaffolding. I’m pretty sure they don’t need to hug the building walls for this, but it being on high speed I couldn’t get a screenshot of them doing it away from the wall in time 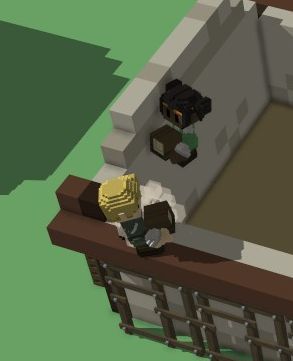 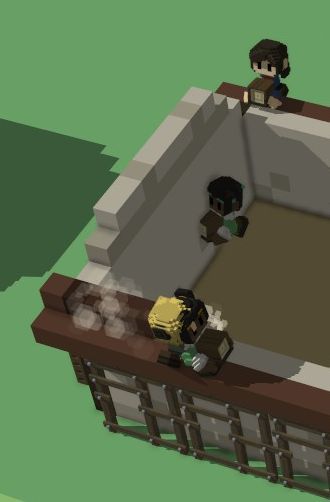 Oh I’ve seen this. I’ve actually seen this in older releases as well.

That’s not scaffolding, as they go up in diagonal. I think it’s just the pathfinder, that sometimes glitches and allows them to go through walls that way even to get to the roof.

Pretty sure they can go up scaffolding diagonally though, that’s why I named it that. Regardless, thanks for the tip about previous releases

Pretty sure they can go up scaffolding diagonally though,

Well, if you say so…
I thought they went up and down on the ladder, but not the actual scaffolding (I’ve seen them go diagonally, but that’s caused by this bug, that’s how I see it, because they pass through the wall.)
Maybe you’re right, we don’t know the origin of this bug, so any hypothesis is valid.

Regardless, it’s a problem.

I had some workers walk through walls when i tried r162 and i had a worker magically walk through a house under construction by some how flying or using some form of levitation to get to the scaffolding on the other side of it to help finish the roof. i will try and get a shot of this if i can.

I’m not sure, but this might not be a bug. I remember something like they allowed this behaviour to avoid that settlers get stuck inside unfinished houses.

Although we’ve seen this issue long before…

Are you referring to real flying? Like going from one wall to the opposite one levitating? Then it could be that you had the roof hidden in the sight mode.

And yes, try to reproduce it, it will be really helpful

the flying part of what i said yea that is exactly what happened. though it wasn’t on the outside of the building he went right through the walls of the house to the opposite side of the structure to the top of the scaffolding and started working on the roof

As for the actual walking through walls part i had built a basic perimeter fence/wall around my base to filter those pesky goblins (since we don’t have control of our patrol routes yet) and one of my citizens while working on the walls walked right though a completed wall to take down scaffolding on the other side of it. it only took him a split second to do it so i might have a hard time getting a snap of it.

Remember that you can pause the game (there’s some buttons on the bottom right), and then rotate/zoom the camera to your liking and make the screenshot.

I think I’m going to do a triple merging…

Edit: This one below might not be the same, but it’s enough similar, I’m just trying to clean old reports…

Summary: VERY, VERY rarely (about 0-1 times per house built) a builder will opt not to use the scaffolds and simply float from the stockpile up to the top of a building with his/her wood to continue constructing. After which, he’ll use the scaffolds just as normal.

Expected Results: Builders are not flying creatures, and should use scaffolds.

Hmm, well for me, one time they did not even build scaffolds. They just climbed up the air.

See screen capture. I’ve seen this in numerous worlds on two different computers. I don’t know how to reproduce this one yet but I have seen it going both up and down.

Seen this in previous versions as well, though again I’m not sure how to reproduce it

Agree, I’ve seen it on older versions, too. I should also note that they never go somewhere they don’t actually have access to. It’s just that usually instead of taking the ladder or stairs they take a more…direct…route.

Never breaks anything though and it’s pretty rare to see.

This reminds me of how Minecraft sometimes draws boats in a different place than where they really are. I wonder where the game - specifically pathfinding - thinks those Hearthlings are?

I too have had this issue, However for me it only seems to happen when I make stairs to a location. Nice capture though! I believe I can fly, I believe I can touch the sky

while i applaud their efficiency, i suppose this should be fixed…

thanks for the confirmations folks… [tagged]

Summary:
My shephard is sometimes flying to his sheeps. When the sheeps are on a higher area the the shephard and the shephard wants to crop a sheep he simply walks to the air to get to the sheeps and does not use a ladder.

Steps to reproduce:
create a area for sheeps on a high area
let the shephard collect some sheeps
create tasks in lower levels

Expected Result:
Shephard uses ladders to get to his sheeps

Actual Result
Shephards is flying to his sheeps

I just figured they were SuperHearthlings. From a far away planet that exploded. The worlds yellow sun gives them great powers.