Can I join the Spanish translation team? I’m Uruguayan and I’m good at translating. I’d love to help this game.

Hello, folks and especially devs!
I’m native Russian speaker and know english pretty well. So, considering how Russia is pretty big gaming market and you’ll eventually will have to translate it into russian, so I’m offering you my help.

So, contact me via email or in-discourse messaging system.

We have a thread to keep track of aaaalll the people who wants to help check it out:

Continuing the discussion from the “Joint translation efforts”-thread and the overview started by bastiweb, I would like to split the “how” do we translate discussion from the “who” wants to help overview. Once we come closer to the Beta, this overview might help people to gather and join forces. So if you feel like you can and want contribute to translate Stonehearth into another language than English, please join the club by simply posting your name in this thread. And… don’t wait for someo…

Also welcome aboard and feel free to introduce yourself here:

It seems worth the time to introduce ourselves to the nascent Stonehearth community. Take a moment to introduce yourselves. I’m Paladin and I feel like the creators of Stonehearth must have read my diary because its basically my dream game: building, rpg, retro graphics, customization,and I could go on! (Only I don’t have a diary because I’m a grown man and that would be odd.) I’ve kicked in at kickstarter and I’m excited about playing the beta asap!

Heya again. Add me to the OP please.

I checked some other guys who were saying they can translate the game into russian… Not so much of a translators they are (most of em).

To translate, to TRULY translate the game and transcend its, let’s say, soul, you gotta understand both languages quite good.

I myself am the translator (literally - I freelance for one company), and am capable of such work. Moreover, english was my passion over the years, so I’m quite fluent in it and understand some ‘inside jokes’, if you can say so about a language. Just tell me where to start

Just tell me where to start

Well, so far, everything is manual work. And that includes digging through zip files and replacing the English files. There is no official place to dump translation files. And no way to in-game switch between languages. Yet

But there’s a tool to use that can make things easier now in the beginning. Don’t know how many who are using it, but feel free to try it out and discuss it in that thread.

Latest update [2018-06-14] v.0.7.2 is using a new library (Newtonsoft json.net) for reading and saving json files. It’s a quite big update from 0.6 and solves many old problems and workarounds! Only limited tested at release but it seems to work. Direct download: TranslateHelper_a072.zip (256.1 KB) TranslateHelper_a061 removed for now, send a PM if you need it for some reason. Hi guys, as you know I have been working on a little piece of software that could aid the translation work. Feel f…

@tkh That’s not really comforting… For all I know the devs can say ‘wtf you doing guys? We already hired a translator and did a translation, we’re done’.

Oh, I’m not worried about that scenario. They are completely aware of community translation and have been close to answer our questions about translation-related stuff. I can’t point to a specific post, but bits and pieces here and there over the last 18 or so months. Yes, many of us have been on this forum for that long

Although I am a little worried about that this might be quite low in priority and that an official way to insert language packs into the game backbone is very far away.

I can translate some into Japanese.

EDIT: Started Translating, I’ll update again once I have some more too show. 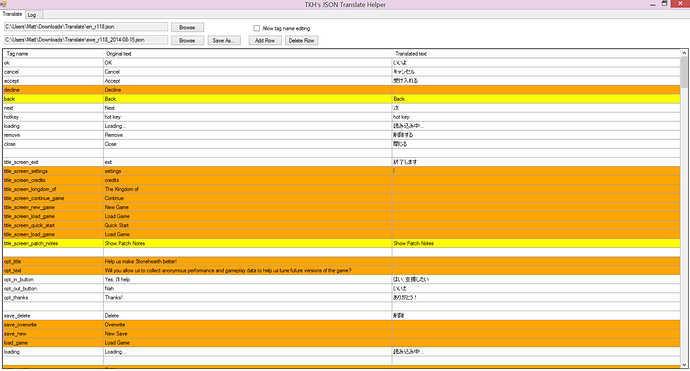 Cool to see some translation in action

Just a quick note or two, I see that you opened the r118 example files for both Eng and Swe.

So I have released my updated version of the program, it works quite well and I have used it to translate to Swedish. See the other thread for more info, and I encourage you to use it, find bugs, and translate all you want

Latest update [2018-06-14] v.0.7.2 is using a new library (Newtonsoft json.net) for reading and saving json files. It’s a quite big update from 0.6 and solves many old problems and workarounds! Only limited tested at release but it seems to work. Direct download: TranslateHelper_a072.zip (256.1 KB) TranslateHelper_a061 removed for now, send a PM if you need it for some reason. Hi guys, as you know I have been working on a little piece of software that could aid the translation work. Feel f…

even if there are already many germans who want to volunteer , if you still need one i would like to help you as well.

my german is quiet good ( would be a shame if not -because i am german) and my grammar is good as well, because i am on my way to become a teacher and for that it has to be good

still i am just a dedicated gamer

sooo german translation for the possible task completed? ^^ when they add more functions in the en.json i will translate them too xD

German Folks - here is the link for your Topic xD

As you may know(or not)

i’m Korean (south korea)
that is lucky enoigh to speak and type english, and i’d like to translete StoneHearth to korean

but there wasn’t a Korean list for it, so it felt nessesry to make this topic, and I expect it to be moved by Steve

I’ll need some guiding on how to add(?) them, but i can take that

and I expect it to be moved by Steve

scanning @voxel_pirate’s list in the OP, it looks like you will be the first Korean volunteer… thanks!

I want to help translate this game on Russian