Come help me with my game

hey guys, I’m making a game and have come to the stage where I need to start making up the rules. however, I’m too lazy to do it myself.

The Game so far:
The game is a symmetrical turn based strategy game, like chess. Each unit is animated in pixel art style in what should hopefully be a fun pixel art style game. Things I’ve decided:

-There are two players on an 8x8 board

-Each player has the same starting army (Symmetrical) like in chess

-Units have low health, that is most units can only take one hit before dying

-Unit movement is abstract, that is they won’t be just moving a few squares like in advance wars, they will move according to patterns set out for each unit, again like in chess.

-Units will have control zones, that is zones that enemy units cannot (normally) enter into. For instance the soldier will control one square in front of it and one square to either side of the front square, that enemies cannot enter unless attacking the soldier.

-The objective of the game is to get a single unit to the other side of the map and have it survive one enemy turn.

What I would like from you guys:
A large part of the game will be COMBO moves. these moves will allow friendly units to do work together to pull off a special move. They are what help set each unit apart from each other. I’m looking for people to help me come up with ideas to for combo moves. I have created an album containing a few of my own ideas. I’ve also included all the units that will be in the game at the bottom: 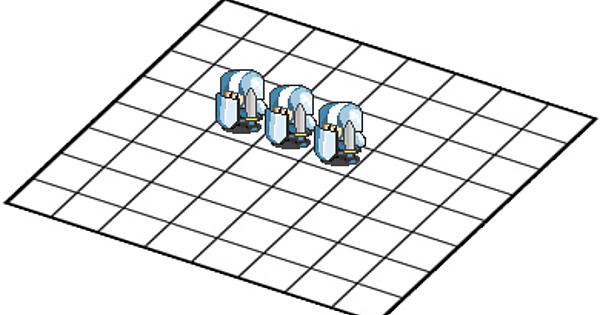 There’s not a lot of rules set out right now, so feel free to come up with anything you like, and don’t feel as though you don’t know enough about the game as i am more than capable of adapting your ideas. However, feel free to ask any questions.

Just as some basics I guess,
Archer behind a palisade could give them a bonus in either offense or defense?
The standard bearer seems like it would be more for morale, so it could just give a boost to units standing around it with no particular placement?
Wizard with the trebuchet to increase damage with fireballs, maybe?
Spearman behind a palisade to give extra range?
I imagine the cleric heals, so cleric with the wizard for an area heal?

I like the concept but it sounds like it’d be hard to put to play with just the traditional units.