I don’t know if this is worth reporting, but since 24.10.1 and now 24.10.2, Stonehearth Editor won’t load. The process appears, but remains stuck with nothing on the desktop. I learned to use it just yesterday

Worked fine for me, although it took a long time to load.
Do you have too many mods? Are they in smod or folders? Bugged mods?

Nope, I’m using it only to read inside of Stonehearth itself and I have that stored in a separate folder. Worked fine before the update. 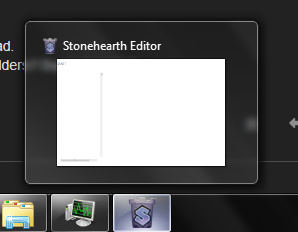 I am getting the same type of error starting yesterday. I can hover over the SHED icon in the taskbar and see the same preview as the picture in the previous response (Amnaa may 26). If you hover it will show a preview window but when you click on it, it doesn’t open and the interior of the preview window goes black (but still has the window frame). I have tried the release that is packed in the most recent SH and I also downloaded a (maybe) more recent version and built it with visual studio and both do the same thing.
Please help?

If you run it in visual studio in debug mode, does it hit any exception?
On first time run it should ask once for the mods folder

I get this error: 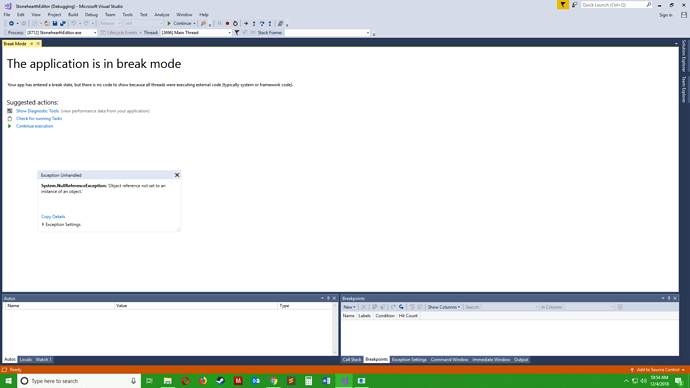 image.png1920×1080 161 KB
It asked me once where to load the mod files and it worked. I then moved all my mods to a different folder so I could work between them and move them one at a time into the game folder after the work. Then I did “change mod directory”(?) and reloaded the mods. All that worked fine until I closed the program and tried to reopen it.
tacocat December 4, 2018, 3:58pm 7

Is there a way to try manually telling SHED what the correct file path is (in a config file or something?)

There’s a config file somewhere in the folder, but I don’t know if it ever worked.

If you copy the mods back where they were, does it load? Perhaps it hasn’t saved the new path correctly

Certainly moving/deleting stuff while SHED is open and has it loaded is a bad idea.

It does not change anything. Here is the log file also:

It feels like when Stonehearth doesn’t open because the port is already in use.

Make sure you don’t have any SHED-related process running in the background. Perhaps restarting your computer would help, but sounds a bit drastic.

I have restarted like 3 times this morning. I’ll see if maybe I goofed something and it is “starting” when windows starts or something silly.

It’s the workaround we use for stonehearth when it complains about them.

Sorry, had to go work for a couple of hours. I’m still getting the same errors after doing that. I haven’t re-downloaded and built again in VS… off to do that now!

So after fighting with DOS about who is the administrator of my computer I rebuilt SHED in VS. (release x64). If i run it as administrator from the folder it works. Once. Then back to the invisible SHED. So i built it in debug. It worked. Once. Erase all traces and repeat. Its better than nothing though! SHED is so useful for the dreaded .en file!

If you build it in debug and run it with debugging from visual studio, does it hit any exception when it goes invisible? Or it’s just the error you mentioned above?

I don’t think I have tried that combo yet. Every other way leads to the VS error, or the .log error, depending on where I try to start it from. I’ll try and let you know. ( I have it running so I don’t want to close it!!!)

stupid question maybe, but are you just running the SHED from inside the stonehearth folder? (worked fine for me yesterday…but i intentionally dont point it at the mods folder. but at the steam uploads folder)

but i intentionally dont point it at the mods folder. but at the steam uploads folder

You should be able to do both now.

Indeed! But the non mods folder is more practical because then it doesn’t have to load all of base stonehearth :’)